So I have initiated a summer project that, should it come to fruition as presently envisioned, shall be ever so wacky. Which leads me to this present evenings musings: Do you have any Franken-guns? That is a cobbled together contraption that you like for whatever reason or purpose. If so, do share!
Read More

Shared this guy a couple of times. I bought a collective crap ton of mosins and their respective ammo back in the day. One was for worse wear and I had my way with it. It wasn’t pretty. It was a hell of a lot of fun to shoot though. 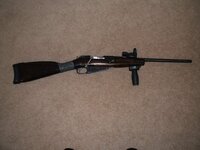 Shown this one a few times as well...
I built this pistol out of spare parts from around the shop.
It has a hand made stock of maple...
A chunk of a .54 caliber rifle barrel...
I converted the flintlock to percussion...
I think the hammer and side plate are antique...if not antique , they are "old"...
I did but the triggerguard new...
( ignore the Colt Dragoon... )
Andy

A most bodacious franken Mosin!

I don't have any frankenguns, but I do tend to gravitate toward orphan firearms for some reason. Somewhat like my sad former affinity for English roadsters.

Edit in... @AndyinEverson, you're a man of many parts.

I only have one firearm that qualifies for this thread...

When I lived in Arizona, my best friend had an old Montgomery Ward single shot 12ga shotgun that he had that he didn't want and gave to me.

I decided to turn it into my version of a Snake Charmer for my outdoor excursions into the Arizona back country.

I then painted the receiver a nice desert tan, the barrel an OD, and the stocks were done in a textured matte black. I found a used camo padded sling in a bargain bin at the local gun shop, along with a nylon shell carrier. I sewed the shell carrier onto the nylon sling.

The barrel has a nasty habit of coming apart from the receiver, so I secured it with black electrical tape. Occasionally, the firing pin will fail to ignite the shell on the first try, requiring the action to be opened and closed for a second shot.

It came out looking pretty cool, even though I have less than $30 into it.

And I actually used it to dispatch a Diamondback rattler once. I was at my friend's house, who gave me the shotgun. My Suburban had a clogged fuel filter, and I was underneath it in his driveway one late afternoon removing the filter when I heard an odd noise. I thought the sprinklers had come on for his landscaping. Sounded like a hissing noise. Looked over and a rattlesnake had come up to the edge of the driveway, about 5' from my head, and coiled up and decided I was in his territory.

I still have the scar on my arm from sliding out from underneath that Suburban in about 1.5 seconds.

I reached into the Suburban where I kept the homemade snake charmer, grabbed it, and blew the rattler's head off in one shot.

The gun worked perfectly for it's intended use. Still have it, but have no use for it. Not even worth selling. 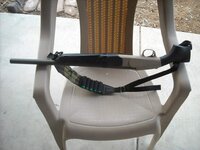 It worked when you needed it to and it earned its keep. You could retire it with honor, or turn it in at a gun buy back for for a bus ticket and an Obama phone.

I'd go for the phone.

Guns? Nope, not this guy. I lost them all.

Mine are all factory new... I did fit some grips on a HighStandard recently tho...

Oh man, I thought this would be the place to share an AR built with so many different manufacture's parts that it would make your head spin.... I guess I'll look somewhere else to post that one...

Four different Chilean Mausers cobbled together into one. Re-machined barrel, repaired handguard, but I like it never the less.
Almost every milsurp I own has been rearsenaled, often by me. So they are all Frankenguns, that’s what makes them fun. 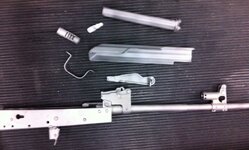 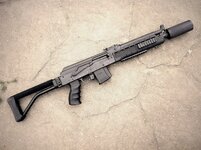 MountainBear said:
Four different Chilean Mausers cobbled together into one. Re-machined barrel, repaired handguard, but I like it never the less.
Almost every milsurp I own has been rearsenaled, often by me. So they are all Frankenguns, that’s what makes them fun.


That's a beauty. Just something about those old mausers.


Looks scary! Extra dangerous with that " thingy that goes up"

EDIT: just noticed the the semi-automatic staple gun in the back. LOL

I think this applies here

the galil sight is to tall for the ak front sight...gotta figure that out 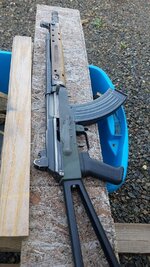 I have a century arms imported L1A1 that I bought cheap years ago. Wouldn’t feed properly but a feed ramp mod with a dremel cured that. A metric paratrooper kit was made to fit along with a dsa railed para top cover. Some custom sight work was also needed to get the irons to work. A Saw grip and extended safety lever finished it off. End result is a great shooting unique frakenfal, worts and all. 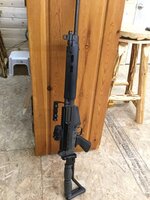 I'm seriously thinking of buying one of these Lage Max 11/15 uppers that would convert my FA Mac 11/9 into an AR style rifle that shoots 5.56.
It does make it look like a Frankengun.
They're not cheap, but considering M16's are going for over $24,000 or more, $3,500 bucks isn't too bad since the Lage conversion upper is able to change out barrels just like an AR-15, I should be able to mount a .300 Blackout barrel and run my AAC suppressor.

the galil sight is to tall for the ak front sight...gotta figure that out

surevaliance said:
From this...
View attachment 575713

Don't be this guy Thread: