Really, are thier unions still giving to dem politicians? How many have stood up in defiance of the laws in the press?
Also remember, Sheriffs are elected officials. They have to answer do thier voting public. While police chief/state police appointed.
D

One should converse with police on the street, not political appointees like chief of police. Most I have spoken with support the 2A.
D

I used DuckDuckGo.com to search for street cops' feelings on citizens owning guns. It was generally pro-second amendment. There are good arguments to use in your letters, emails and phone calls to Oregon legislators.

DONOTBUGME said:
Really, are thier unions still giving to dem politicians? How many have stood up in defiance of the laws in the press?
Also remember, Sheriffs are elected officials. They have to answer do thier voting public. While police chief/state police appointed.
Click to expand...


With the Janus decision in The SCOTUS, the unions use of dues to support the dems that created the closed shops was ruled as unconstitutional. Now that we don’t have to pay dues, many are optimg out and joining organizations like the Fraternal Order of Police which leans to right and supports gun rights.

Shootshellz said:
Hate to burst your bubble, but in several cities in Washington Dumbocrat politicians are the ONLY ones in office. Wake up.
Click to expand...


That's exactly my point. Dems appoint puppets. Sheriffs have to be accountable to the voting public

Shootshellz said:
Sorry; it appeared at first glance you were bashing police unions (which you shouldn't).
Click to expand...


I am was bashing police unions. In fact, all public unions should be outlawed. They get to donate to the same politicians they go into collective bargaining with. Only the public sector gets raises for performing worse.

No_Regerts said:
With the Janus decision in The SCOTUS, the unions use of dues to support the dems that created the closed shops was ruled as unconstitutional. Now that we don’t have to pay dues, many are optimg out and joining organizations like the Fraternal Order of Police which leans to right and supports gun rights.
Click to expand...

That's a dumb name, acronym is FOP... why not make it the Collective Order of Police, acronym COP?
I'd rather be a COP than a FOP...
B

If correct, with Clallam Co. Sheriff now in the 'won't enforce pending court ruling' position, this would be 14 out of 39 counties so far...would be great to get a whole bunch more...well over the 50% mark...and also re-affirm the LE organizations in opposition before it passed...

RESIST!! A page from their own book! 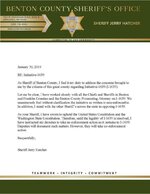 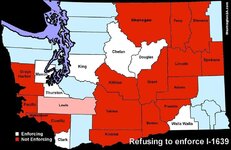 A definite no...
Mr. Deckert:
Thank you for reaching out to me reference I-1639. I really appreciate the support! The initiative is poorly written, is unconstitutional, and unenforceable. I will continue my efforts to fix it.
Thanks again!
Bob
Robert Udell
Sheriff
Yakima County Sheriff’s Office

When you write to or call the politicians, understand that they hear lots of people telling them that crime will drop if guns go away. Many DO NOT KNOW that the street cops believe overwhelmingly that more gun restrictions will not cut crime. You can quote statistics all day long. But when you refer them to STREET COPS who all say those laws don't help, now there is some credibility. Please review this material, reproduce in your own words and flood their inboxes and phone lines.

If the sheriffs refuse to enforce the gun confiscation/forced registration cannot the Governor call in the National Guard to essential declare de facto martial law if he feels there is some sort of "state of emergency". For example, if people are in large numbers refusing to have their guns registered, could he not claim a threat to security within the state? For example, during riots and other times of lawlessness governors have been able to declare a state of emergency and to call in the National Guard. In theory, if people are violating a state law, would the governor not have the ability to have National Guard come and seize firearms from people? Also, as much as I respect the sentiments of these sheriffs, Spokane county voted in favor by a considerable amount for i-1639, so wouldn't a defiant Sheriff essentially be voted out of office since Spokane County was supportive of the gun confiscation /forced gun registration law?

Of course, any gun ban is unconstitutional, but the 2nd Amendment is hardly enforced at the state level and seems to be mostly at the mercy of the courts in the state. Enforcement of the 2nd Amendment has helped remedy a few cases in Washington DC, Chicago and other places, but has proven useless in most other state matters. If the 2nd Amendment was truly compulsory at the state level, states like New York, California, New Jersey, etc would not be able to arrest people for exercising these rights that are not suppose to be circumvented at the state level. I was hoping with a new "pro-gun" president and a new Supreme Court we would have seen a reversal in these state measures, but it appears more and more states are moving for outright gun bans, registrations and confiscation like Washington and soon to be Oregon.

So, on that note, I have my concerns and seriously wonder if the Governor would have any obstacles enforcing these laws with military instead of defiant sheriffs. I am reading governors no longer have sole authority over their state's National Guard and the President and a state Commanding General would have to approve or collaborate with the orders of the Governor, potentially. Of course, what happens if we end up with an anti-gun president who would more or less give his blessing to a state governor who would declare a state of emergency and order a gun confiscation?
Last Edited: Feb 9, 2019 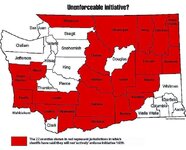 Clallam still not on there, so at least 23...a hair under 60%. Hopefully more to come. Share with anybody you can think of, especially the media and pro-2A legislators.

Maybe when these new young upstart dems start telling all their wonder supporters they need to turn in those nice big, fancy sedans, SUV's and such, and start riding trains, they'll kinda see what it's like...especially when their beloved 'elites' get 'exemptions,' cuz, ya know...they're more equal.... Yep, I'm surely they'll just gleefully line up early to hand over the keys to the Lexus, Infinity, Escalades...
you know, for the good and safety and all. Heck, they should start doing it now...plenty of public transportation and bikes out there...

^^ and those elected officials need to give 70% of their wages back just because, well.. they're elected and are in that 'special category' like those other unworthy miscreants that are making over $$10mil/yr.

Other State A new Louisiana law will allow residents who are veterans and active-duty military members to carry concealed guns without a license.