Anyone use CLP Break Free for cleaning or lubricating your guns?

Someone recommended this CLP Break Free to clean and/or lubricating handguns. However I noticed that on the can itself, this product says nothing about using it on guns but it is for cleaning/lubing metal in general. Does anyone else have experience with this product in using it with your Glock? Does anyone not recommend this? Should I just stick with Hoppe's Number 9? Thanks in advance for all your answers. 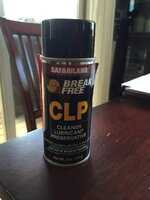 Correct me if I'm wrong, I thought it was used extensively in the US military for small arms cleaning and lubrication, like that's where the name came from. I think it's a great oil for firearms. It's been compared to a lot of other products for corrosion resistance and while there are arguably better out there it's a solid choice. It's not the fastest cleaner and I often use it after Hoppe's or something like Gun Scrubber to get a lot of carbon out quickly but the nice thing about CLP alone is it doesn't smell as bad or bug other people in the house if that's an issue. Giving it time to soak helps too.
Last Edited: Jul 24, 2016

No problem using the CLP line of products on Glocks, been using CLP for 20 years, including on Glocks and other polymer framed firearms.

And yes, CLP was indeed utilized by the military. Not sure it still is, but it certainly was...

That's kinda weird that it says nothing about firearms

But it's definitely for firearms.

Not gonna hurt your Glock. There's way better lubricants for your Glock, though.. I'd clean the gun with the breakfree then dab your contact areas with a drop of real oil.

As to mil use... Breakfree brand CLP smells nothing like the unbranded dirty white jugs of CLP we used in the army. I think CLP is a pretty generic ancronym for anything that cleans lubes and tries to prevent corrosion.

I could be wrong

I am supposed to clean and lubricate my guns? ( scratching my head.)

I use CLP. But not as much as I used to. I use to use it for bore
cleaning of ARs. But I have found bore solvents work better.
I have tried many types of bore solvents. I have settled on a mixture of
75% of Shooters Choice and 25% Kroil Oil. Don't know if this is the best mix.
I also use good old number 9 for old rifles. Let the bore soak over night. Repeat.
I have also started experimenting with some of the new "Super Lubes" . Don't
know which one is the best. But all the ones I have tried work better
than CLP . So I now only use CLP for general metal wipe down.

I hear vegetable oil is a great do all gun product.

I have been using it for a while for general cleaning and lubrication. I still keep other solvents and lubricants on hand too, but for general use, I like the all-in-one usefulness of it.

Wow, I didn't know I would get so many informed responses. Thank you everyone. I'll use this with confidence on my guns. But as suggested, I'll be using the Hoppe's oil to lube and CLP to clean.

I like Hoppe's 9 but I wanted to see if there was anything better and someone recommended CLP. I also heard good things about M-Pro7. Is that worth trying or is it pretty much the same as Hoppe's?

parallax said:
I am supposed to clean and lubricate my guns? ( scratching my head.)
Click to expand...


Only if you use them, or they go out on a Saturday night and discharge their evil selves!

I bought some Break Free CLP to lube after cleaning, and found it to be too thick for lubing but great for exterior preservation (it has teflon, right?); it's not a convincing cleaner, especially compared to Powder Blast or even RemOil. I still have the same can I bought years ago. Powder Blast is something I use a lot of; a great solvent under pressure that can do a quick detail clean of trigger groups without detail stripping or anything else really. I use RemOil, Kano Kroil, Militec oil and grease. I use gun wax on the exterior of hunting rigs and guns that get a lot of holster use; I use the Militec on AR's and handguns; it the best for a parkerized finish as well as an effective dry lube. Deep barrel cleaning is done with an ammonia based solvent for removal of all fouling.
Last Edited: Jul 24, 2016

Ben Beckerich said:
I hear vegetable oil is a great do all gun product.

thorborg said:
I personally wouldn't use any product that can become rancid on my guns
Click to expand...


Perhaps he was thinking along these lines...this is my rifle and this is my gun.....

9mm guy said:
Wow, I didn't know I would get so many informed responses. Thank you everyone. I'll use this with confidence on my guns. But as suggested, I'll be using the Hoppe's oil to lube and CLP to clean.

I like Hoppe's 9 but I wanted to see if there was anything better and someone recommended CLP. I also heard good things about M-Pro7. Is that worth trying or is it pretty much the same as Hoppe's?
Click to expand...

Hoppe's (note the apostrophe meaning it belongs, or is of "hoppe" - It is not pronounced Hoppy, although many Americans do so. It's similar t0, but not the same as Garand, it became common lexicon in the US to emphasise the latter part of the word, wherein fact the Canadian inventor does not do that and confirmed there is no emphasis in the late 2000's.

Anyway, FYI, Hoppe's Elite, is a better version, and it's made by MPro7 for Hoppe's.

Honestly, the CLP you have there (and CLP is just a basic acronym) is fine, just keep it regular, there are of course far nicer/more effective solutions out there.

Personally, i don't tend to like a product that claims to do two opposing things, so i use a combo, an actual cleaner (MPro7 cleaner) and a lube, usually Seal1 (or Frog Lube as i'm using up my last pot on exterior as a barrier protectant) Some may have seen FrogLube have issues after storage and use in very cold temps, Seal1 is the same stuff without that problem. However, both of those products are very highly rated as barrier protectants.

Milsurp, i keep fully synthetic, so it doesn't cause issues with the non-petroleum based) stuff (Seal1/FL) they seem to have greater issues with massive amounts of metal on metal sliding, so i use Slip2000 EWL and EWG (oil and grease)

I used to use break free CLP, but didn't care for the smell and went back to the good ol Rem oil... The only thing Remington ever made that was worth a damn. Oh wait, they did make a good shotgun...

Hmm, that's interesting, as i never found RemOil to be anything other than a *very* thin and light oil, i have a bottle here, but it's of little use for general lubricant for me, it doesn't last as a result.

CLP is still used exclusively in the military on our small arms! We have gallons of the stuff! Unfortunately the formula has changed over my last 23 years of service and the "good" cleaning agent has been taken out...some crap about cancer and the environment and harming of animals and the people of Kalifornia...

Its good to go. I use it to clean and lube my firearms
(when not using grease for storage)
Never had an issue.

thorborg said:
I personally wouldn't use any product that can become rancid on my guns
Click to expand...

Anybody using ceramic dry lube on their guns?

Who, if anyone, could counterbore a rifle barrel?

Anyone Dealt with Pro-Precision Rifles LLC, Haines, OR