Quality Handcrafted Bismarck 39" Wooden Warship Display Model
• The model is 100% scratch built with planks on frame construction method from the drawings. The hull and all details on deck are made of wood and painted. This model is not a kit and ready for display. Model comes with a display base and a brass name plate as shown photos.
• Specifications: 39.37L x 6.29W x 12.20H (inch) or 100L x 16W x 31H (cm)
Bismarck battleship is a world-famous German battleship in World War II.The ship commenced in 1936, in service in August 1940, full-load displacement of 50,000 tons, the largest battleship in the world at that time.
Bismarck was a symbol of Nazi Germany Navy ships armed, and well, perfect protection, known as the unsinkable sea fortress, but it was sunk after the implementation of its first combat mission.
The ship in the Denmark Strait sea battle, the Bismarck in the war less than ten minutes after the sinking of HMS Hood Battlecruisers known as the British Royal Navy proud. But by the Ark Royal aircraft carrier take-off of the Swordfish torpedo bombers launched torpedoes hit the Bismarck, the Bismarck's rudder jammed, unable to control the direction of the normal navigation. The next morning, Bismarck was finally surrounded by the British fleet in the continuous onslaught by nearly two hours after Bismarck finally sank in the Atlantic Ocean. 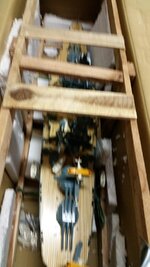 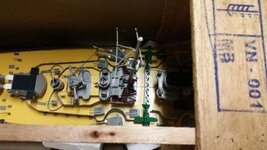 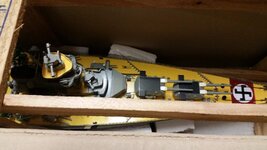 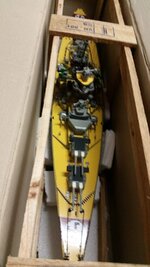 I'm also willing to trade for similar value in a gold coin etc.I am selling many other items as I'm moving back to Ireland.
P