Question - How do you Prepare your Turkey?

I know folks will have different things for Thanksgiving, though the majority of folks will have turkey. I have to confess that I love turkey, when properly prepared, but when overcooked, dry or just bland, it becomes something I don't want anywhere near my mouth hole

Unfortunately, I've had more than my share of poorly cooked turkeys, maybe not quite as bad as the one in National Lampoon's Christmas Vacation (hilarious scene), but darn close. It's amazing that on this one holiday, millions of people will suddenly attempt to cook something they not only have little to no experience with, but won't bother to learn how to do it properly. Unwrapping a bird and stuffing it into the oven until the little timer pops out (as my mother did), is a guaranteed way to waste a good gobbler.

When I got the chance to cook my first turkey for Thanksgiving some years back, I did my research. I'm a pretty accomplished baker/cook, so I am very capable of properly following recipes as well as properly executing various cooking techniques. I found that brining was without a doubt a necessary step in making a good turkey. I wet brined the first 2 birds, then moved to dry brining, which is much, much better in my opinion. A good 2 day dry brine gives fantastic results. Before cooking, stuff the cavity with some aromatics such as rosemary, apple, sage, onion. Follow that with slow roasting (tenting the breast for a time to prevent the white meat from over cooking) provides consistently cooked turkey, both the white and dark meat. Bonus for a properly brined and cooked turkey, the leftovers don't dry out the next day.

I also know how to properly carve a turkey, which means letting the bird rest, loosely covered 30-60 minutes before digging in. And when it comes to carving, I use a properly sharpened knife to separate the entire breast from the carcass before slicing - makes for a nice presentation and nice even slices.

I'm not cooking the turkey this year, my brother is, and thankfully, he is one of the only other people I trust to cook a turkey properly - he also makes some amazing turkey gravy. I do a great cornbread and sausage dressing too, but that's not been requested this year, so that will wait until Christmas. I'll be doing a green bean, bacon and onion dish (no canned soup garbage, thank you) and some nice fresh yeast rolls. We're having a small gathering this year, but sounds like it's going to be good. I may also try making a buttermilk pie this year - never had it, but it sounds really good.

Now, I'm interested some day in trying both deep fried turkey as well as smoked turkey - to date, I've never had a chance to try either, though I hear both produce great results.

Anyway, just curious, for those doing turkey, what's your preferred method of cooking the mammoth poultry? Any special secrets you'd care to share?

My wife prepares the turkey pretty much exactly per your method.

This year she is prepping a smaller bird but serving pork roast as well. Provides some variety and also smaller birds are tastier and easier to cook uniformly.

Best wishes to all!

Hop Sing said:
My wife prepares the turkey pretty much exactly per your method.

This year she is prepping a smaller bird but serving pork roast as well. Provides some variety and also smaller birds are tastier and easier to cook uniformly.


Agreed, smaller birds are easier to cook evenly, but with some know-how even a big turkey can be cooked properly.

I have yet to try it with a turkey yet (I have done it with a whole chicken) but spatchcocking the turkey is supposed to give great results, without the threat of overcooking. I may just try it one of these days. My wife does that with chickens on an open rack, and the lightly boiled sliced potatoes on the rack below get the drippings and brown up. Delicious! 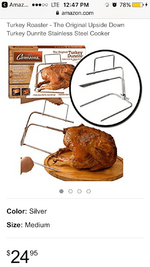 Dark meat fat falls into the white meat. Not supposed to stuff it but I do a little bit of etrains basic flavors but add sage and some garlic.

Easy clean up and it cooks faster so you can lower the temp and get it nice and juicy.

I don't brine it anymore.

Dark meat fat falls into the white meat. Not supposed to stuff it but I do a little bit of etrains basic flavors but add sage and some garlic.

Easy clean up and it cooks faster so you can lower the temp and get it nice and juicy.

We do a wet brine then mix together zest of an orange, butter, leaves from two fresh sprigs of Rosemary and salt and pepper which half way through the cooking you smear it all over.

I just found this particular recipe on this very website. I am going to try it! 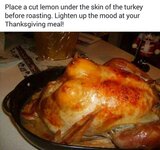 etrain16 said:
Honestly that tool looks a bit like something a gynecologist would use

After three years of eating ham at thanksgiving dinner at each of three sisters houses the fellow noticed that his bride and each sister cut the ends of the ham off. So he asked how it got started and was it to in crease the flavor of the ham to cut two inches off each end?

Each sister said, "ask mom because she started the tradition" so he went to mom and asked why is it the ends of the ham are cut off and her reply was, " because the pan I cooked it in was too short".

Stomper said:
I just found this particular recipe on this very website. I am going to try it!

Ya know, I hate to repeat myself, but this is one of those times a previous comment bears repeating,...

YOU are a sick, sick man Stomper.

And in some twisted way, I like that about you.

I always get the smallest bird I can find, usually about 8-9 lbs.

Then, into a cube softened butter (room temp) I add a mixture of salt, poultry seasoning, pepper and coriander. Plenty of each at a ratio of about 2:2:1:1.
Mix well with a fork.
Loosen the skin and pat the bird dry. Smear the softened-seasoned butter mixture all over the skin, and add the remainder under the skin on the breast meat.
Stuff with slices of Apple and Onion, and celery tops.
Refasten the skin and truss the legs/wings in tight.

Start baking in a 400* oven, reducing the heat to 325* after 15 minutes.
Bake breast side down for the first 2/3rds of cooking time and turn it over, browning the skin over the breast meat to perfection.
R

I grab each wing, talk to her gently and tell her I'm coming aboard. Then I stuff her.

But this year we're having chicken.

I have 3 gallons of peanut oil that says mine won’t be dry....

My wife, who is way to good for me, is a vegetarian (she would be vegan if it wasn’t for cheese).

I eat Tofurkey with mushroom gravy.

Best Turkey I’ve ever had. (No offense Mom!)

Reed said:
My wife, who is way to good for me, is a vegetarian (she would be vegan if it wasn’t for cheese).

I eat Tofurkey with mushroom gravy.

Best Turkey I’ve ever had. (No offense Mom!)
Click to expand...


Glad you enjoy it. I would have to do a hard pass on that myself!

etrain16 said:
Glad you enjoy it. I would have to do a hard pass on that myself!
Click to expand...

What Value Do You Place On Your Personal Time? (AKA Opportunity Cost)

People Foods Safe For Dogs? What Are You Feeding Yours?

Who is collecting data from your vehicle

How do you even handle that?