What is my rifle worth?

If you’re going to sell that, sell it somewhere that emphasizes appreciation for a rifle like that. Selling that here is like trying to sell a 69 Chevelle SS to someone looking for a Honda Civic.
S

Very glad to be of assistance.

Zerd909 said:
Thank you all. Was just tossing around the ideal of possibly selling it.
Click to expand...

How long have you had it?
OP
Z

No_Regerts said:
How long have you had it?
Click to expand...

My grandpa passed it down to me and probably won’t sell it. Just wanted to see what’s it worth. So to answer your question currently since 01/20/19. My grandpa has had it since he was a kid. Passing down to me his 1917 Winchester 30-06 as well.

If you sell it you will be forever sorry. The gun and the money will both be gone. I have a pre-war 30-06 that can shoot tiny groups.

CountryGent said:
For the Model 70, Pre-War .257 Roberts is shown with:

Yeah, kind of but not really. The op needs to give us the first 3 digits of the serial number followed by xx. This will tell me when it was made. The safety lever isnt "pre war", its a transitional "type II model. Those were made after the war and up to 1949. Unless its been swapped out, then that reduces the value, as well as the receiver being drilled and tapped for a scope mount. If its a post war transitional model, im guessing the serial # is closer to the 95xxx range. When evaluating the value of these old rifles, there is so much that needs to be considered. So the picture and value estimates is a good rule of thumb, IF we know the real condition of the rifle and that depends entirely on how "original" the rifle is. 1 fuzzy picture just isnt going to cut it here. Op, if you can post more pics. Good pics too, because that will help determine if there has been any work done to it. For instance, a receiver that has extra (not from the factory) holes in it will greatly reduce the value. Another example that reduces the value is a stock that has been cut down, or one that has been whittled away to allow for an aperture sight. More pics is key here.
Last edited: Oct 17, 2019

Is the bolt etched with the rifles serial number?
S

CountryGent said:
For the Model 70, Pre-War .257 Roberts is shown with:

Indeed. Per your request, from the aforementioned standard text on the topic: 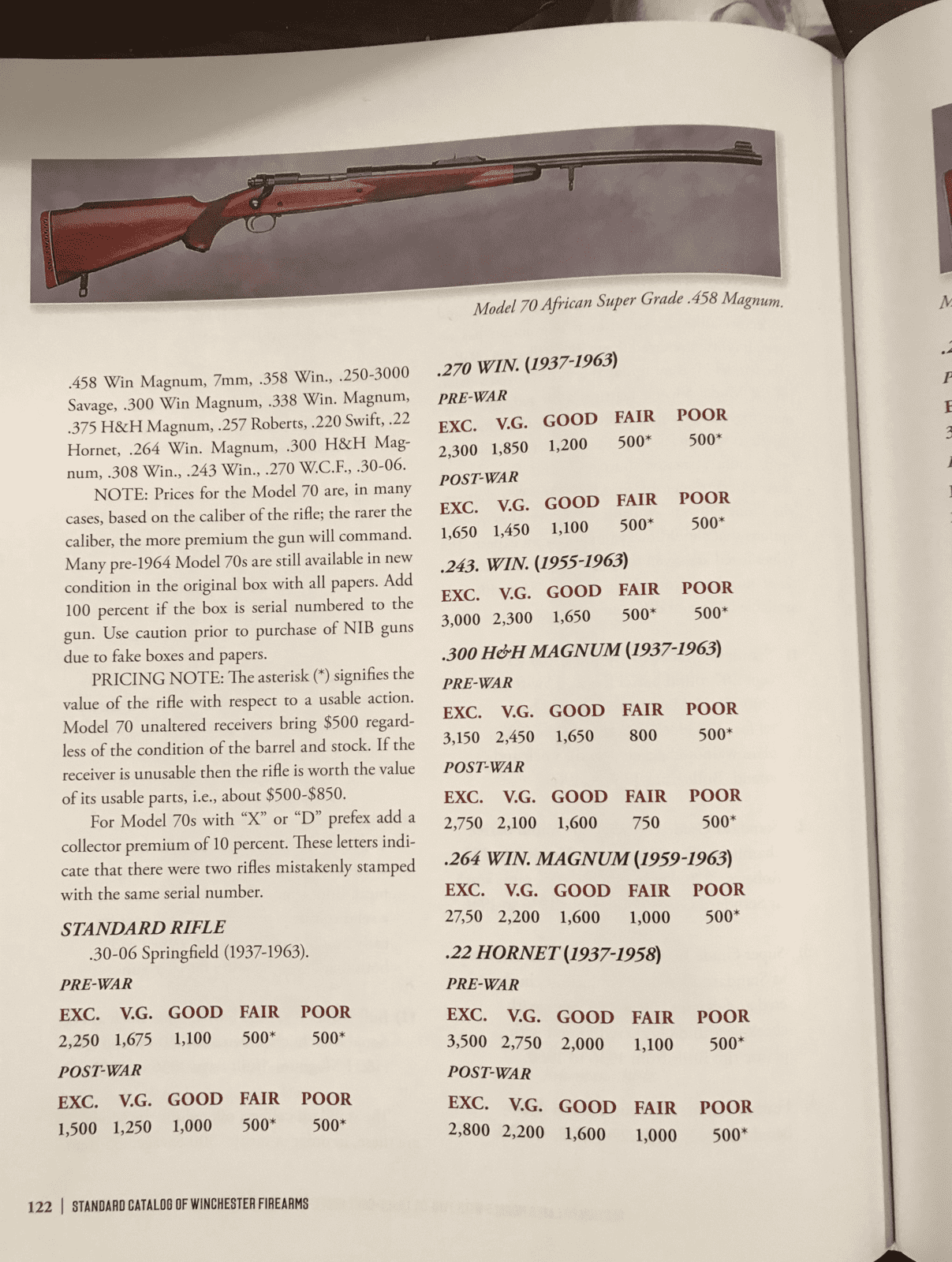 If I may be of any assistance, at your service.
S

CountryGent said:
Indeed. Per your request, from the aforementioned standard text on the topic:

If I may be of any assistance, at your service.
Click to expand...

You are quite welcome. Cheers.

$25 for the case depending upon how well used it is.

No_Regerts said:
If you’re going to sell that, sell it somewhere that emphasizes appreciation for a rifle like that. Selling that here is like trying to sell a 69 Chevelle SS to someone looking for a Honda Civic.
Click to expand...

It seems like everyone is looking to buy the cheapest honda civic they can get their hands on too.... Not like the good ol days anymore... and also, the OP never answered my questions. Its likely not a "pre war", and if it is, it's been drilled and tapped, thus reducing the collector's value. If you look at the safety, it's either been modified/changed to a tilden or similar or it's newer than what the op says it is. A simple serial # check would confirm that... I'm not going to be like some here and throw out book value when it's not confirmed on when it was made. Then after that, I'd use the Winchester red book of values, as that is the best and most accurate form of values when it comes to assessing Winchester firearms....
Last edited: Oct 10, 2019