ENTERPRISE, Ore.For the first time in recorded history, biologists have confirmed that tracks found in the Wallowa Mountains of Northeast Oregon are those of a North American wolverine.
Researcher Dr. Audrey Magoun found the wolverine tracks in the snow on April 17 while hiking to a remote camera site set up to detect wolverines. She followed the tracks for about a mile until they left the river bottom headed into the high country.
From the size of the track, it is probably a male, said Magoun who has dedicated her career to studying wolverine since she received her Ph.D. in 1978.


More on the ofwd site

Thanks.. wolverines are fascinating critters

I saw one on Paulina Peak about 20 years ago. It ran across the road as we were on our way up. I confirmed it with ODFW at the time and they told me I wasn't seeing things and there were a few around there.

I saw one 2years ago comming down the north side of satus pass. it was huge, had to do the doudle take to realize what it was. I count myself lucky in getting to see one of gods special creatures.

had to do the double take to realize what it was.
Click to expand...

So did I. Mine kind of 'hopped' across the road and at first I thought it was a small bear - but having seen many bears I never saw one move like that but I will never forget the big, furry paws.

I was thinking the same thing, then realized it was way to short legged to be a bear (seen plenty off them) it just kinda of just humbled along. its was in no hurry.

Hunter S. Thompson allegedly hand feeding a Wolverine in his yard - you decide. 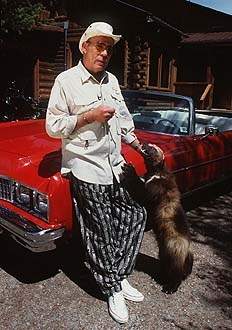