Here are the signature-gathering locations for this weekend 12/14-15 that I know of.

Which of these locations can you help out at?

If you're running a location, please comment your location and the # of volunteers you need:

It works best to have two people. Let's get enough people so we can each do 4-hour shifts!

If you have EZ Up tents, tables, and chairs you can contribute to the cause, it'll make lives so much easier!

If you've never done it and want to shadow someone, you're welcome to come join me or any of the other seasoned pros and we'll show you what has worked for us.

Or you can set up another station near you! Odds are high that your favorite store might be available!

If you need signature forms, you can visit the major distribution centers listed in blue in the master signing location list.

There is also a petition at

2A2Dend said:
There is also a petition at South Sound Guns (SSG)
Click to expand...

Yes, there is, and thank you for that. The master list of all signing locations is in the post above, and South Sound Guns is listed therein.

This post is about people like you and me sitting outside of Fred Meyer to help gather more signatures than all the gun stores can gather.

Are you able to help us at one of these locations as well?
OP

This is written by Arielle, one of our ladies BRAND NEW to firearms this year to the other ladies in our private training group. I found it inspiring and super helpful for those who aren't already seasoned signature gatherers.
--------
Hi ladies! If any of you are able to help us gather signatures to repeal 1639 in the next 3 weekends, we could sure use the womanpower!

I thought I’d share a few of my experiences to dispel any concern about asking for support on such a polarizing subject... My first experience gathering signatures was outside Husky Field during the Apple Cup, and two days later I stood outside Sportsman's Warehouse in Federal Way.

By a huge margin, the vast majority of people who signed in either location actually thanked us for being out there! Often people would see our signs and booth and pull over their cars just to stop and sign. It definitely felt awesome to be out there when people were so appreciative!

The next most common answer is something along the lines of “Oh what’s that again? Repeal gun control? Sure I’ll sign!” There’s very little you’ll have to say to get the point across and the signee puts it together. There were a handful of dissenters but for the most part, it was conveyed through an eye roll or a harsh “Nope!” as they walked past.

In my two opportunities of gathering signatures (a total of maybe 8 hours) I’ve only encountered 3 people who wanted to debate gun control at all. Two of them were gun owners themselves, so therefore not that combative, they just wanted to talk semantics. In these cases, it was easy to say “to each their own, but for this, we’d still love your support.”

As for talking points, Curtis has a handy slip of paper that covers all of the agenda of 1639, but in my conversations it usually came down to saying 1639 1) recategorized semi-automatic rifles as “assault weapons” which now requires extra training, 2) mandatory 2-week (10 business day) wait even with a CPL, 3) indefinitely waiving HIPAA/right to medical privacy, and 4) increased the minimum age of firearm ownership from 18 to 21.

Curtis gave me a great tip for knowing where to start when someone approaches the booth and asks questions... if it’s an older person, start with the waiving of HIPAA/right to medical privacy since for them it might be really important. I also occasionally added the detail that there were no set parameters that the government would use to determine a person’s eligibility for firearm ownership and that it was a dangerous and slippery slope for them to have that kind of power.

If it was a younger person, they might care more about the age limit being raised to 21, so I’d start there.

And if it was a middle-aged person, quite often the mandatory 2-week (10 business day) wait would get them fired up.

It really only took 2-3 people asking what 1639 was for me to get the hang of it! After then it was just tons of fun raking in the signatures, and getting thanked for it! If you have more questions please let me know! I could go into lots more detail if you have further questions.

I’ll be out there again this Saturday and Sunday, and I hope to see you all out there! Let’s do this!!
---- 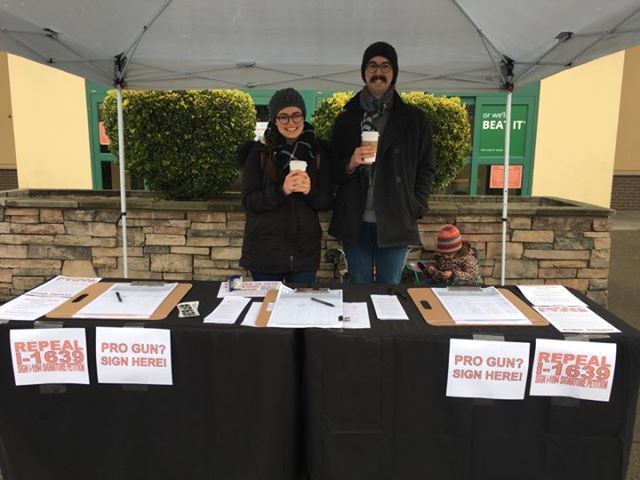 For those that don't know about 1639, this is a good little video which goes through all the lowlights.

Which location can you help us with?

Thanks for all that you are doing, we need every gun owner out there these last two weeks.
I am laid up physically but have called on my circle of friends to come over and sign my petition. Every signature helps so please get out there during the Christmas rush.
Last edited: Dec 8, 2019