So I want to move my Colt 6951 out of the garage safe and into the bedroom. I have young girls and need to secure it from them firing it. Our room is small and I'm thinking of just a rifle bag with mag or trigger lock. I need a light that would work well with the Magpul MOE SL hand guard that I put on. Lastly a green dot sight to co-witness with Daniel Defense fixed rear iron site. I really want green as it seems to work better with my astigmatism.

I did a Google search for "AR wall mount" and got some pretty cool ideas.

Here's one. Hide it in the open.

How is your bedroom set up? Maybe "remodel" your room and install:

One of the hornaday rapid safe wall mounts would work couple hundred bucks but well worth the piece of mind. Or the quick access under bed lockers. Rfid is great sweep it over and it's open. In a late night high stress situation where your getting the rifle out I dont like the idea of a trigger lock or such. Finding key and opening the lock under that stress is not what I want to be worrying about. Just my two cents!

"I have young girls and need to secure it from them firing it."

When my son was a little guy, I was worried about him getting my carry pistol (if I left it lying somewhere - I know I'm not perfect). It was a 1911 at the time. So, I cleared the pistol, and then gave it to him asking him to operate the controls.

He could pull the trigger when the hammer was cocked (which means he could disengage the grip safety). He could cock the hammer. He could take the gun on and off safe. He could get the mag in and out. The one thing he could not do, was racking the slide. After that, I carried my gun with an empty chamber (despite lots of know-it-all advice everywhere to the contrary - bubblegum that...).

Anyway, it's just a thought. Little girls probably can't draw the bolt carrier back on an AR-15. You might even modify the part to give minimal purchase for little hands, just to increase the difficulty. Maybe.

Of course when they get just a bit older, and their brains start to function well enough to take some instruction , they should be taught using Massad Ayoob's methods in his book "Gun-Proof Your Children". Watch out when they invite their friends over, though.

Regarding a dot.
I have astigmatism and was really happy with my Romeo5 Predator when the green dot showed up a lot better for me over the red dot. The triangle shows up nice as well.
I have that mounted on my AR9.

I have Federal HST 147 gn loaded for HD
The 8" barrel doesn't overdrive it and when the meat brakes deploy they should stay inside.
OP
L

powermad said:
Regarding a dot.
I have astigmatism and was really happy with my Romeo5 Predator when the green dot showed up a lot better for me over the red dot. The triangle shows up nice as well.
I have that mounted on my AR9.

I have Federal HST 147 gn loaded for HD
The 8" barrel doesn't overdrive it and when the meat brakes deploy they should stay inside.
Click to expand...

I like the idea of the Romeo 5. If Sig optics have issues can you just take them to Wilsonville? I have the same Federal 147s and out of the 16" barrel I feel that they are hearing safe for the most part, definitely subsonic. I wish that the AR wall mount had 9mm SMG blocks. Maybe I could mill one up. I think the idea that a rifle is under a coat and not always hidden will reduce the mystery of firearms and that they are just tools like knives. Now what about lights. I struggle between a high powered rifle light and something that will not blow me out in the house.

I used this with a support under the stock so that the trigger lock lines up when not engaged. When i was home it got left unlocked. When I went somewhere without it, I threw the trigger lock in. 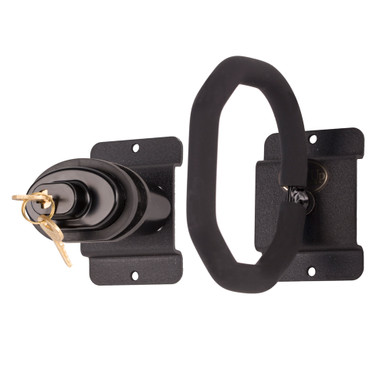 Something like one of the below rifle safes would be my preference over having to fumble with keys and a trigger lock. Note that V Line also has a model that you can mount in between studs...like in a closet.

For lights I'd probably go with something surefire. And I'm sorry but I'm not up on who makes a green dot sight.