Am I crazy or is the GunLawsbyState.com map completely backwards? When I select "Oregon, resident", and "States that honor my permit" , the entire map goes to Red (Permit not Honored). Shouldn't it be the other way around, that Oregon doesn't honor any other state's permit?

Try this one reciprocity maps
B

Heading to OR this weekend from KS to visit family there but have to leave my 2A rights at the border. Unfortunately, Oregon doesn't honor the permit I've had here almost 10 years while KS honors OR permits down here. Maybe by our next visit I can locate another state permit that is recognized by OR and KS...

Check the Utah permit, seems it’s the one most talk about getting.

Bentsight said:
Heading to OR this weekend from KS to visit family there but have to leave my 2A rights at the border. Unfortunately, Oregon doesn't honor the permit I've had here almost 10 years while KS honors OR permits down here. Maybe by our next visit I can locate another state permit that is recognized by OR and KS...
Click to expand...

You won't....OR doesnt have reciprocity with anyone...if you don't have a non-resident OR permit, you can't carry here.

When I got my permits eons ago, I did the OR and non resident UT. UT covers me in 30+ other states ( I mainly got it for WA, since I live close by and go there quite a bit )
I find it silly that I have to keep 2 permits because my state doesnt recognize anyone elses.

Bentsight said:
Heading to OR this weekend from KS to visit family there but have to leave my 2A rights at the border. Unfortunately, Oregon doesn't honor the permit I've had here almost 10 years while KS honors OR permits down here. Maybe by our next visit I can locate another state permit that is recognized by OR and KS...
Click to expand...

The only way I know of is to apply for a nonresident OR permit... that's pretty sorry, IMO.

Jonnyuma said:
The only way I know of is to apply for a nonresident OR permit... that's pretty sorry, IMO.
Click to expand...

He would have to live in an adjacent state (CA, NV, WA or ID)

Not sure if UT covers it or not. Pretty sure AZ does.

SC only recognizes resident permits. So, unless you are an AZ resident, an AZ permit will not get you SC.

BAJ475 said:
SC only recognizes resident permits. So, unless you are an AZ resident, an AZ permit will not get you SC.
Click to expand...

Maybe that's why the paperwork is still sitting on my desk. I sent for it months ago, got it, and never followed through but I'd forgotten exactly why.

Sort of remember that now.

These maps are done using the Android app, MyCCW: 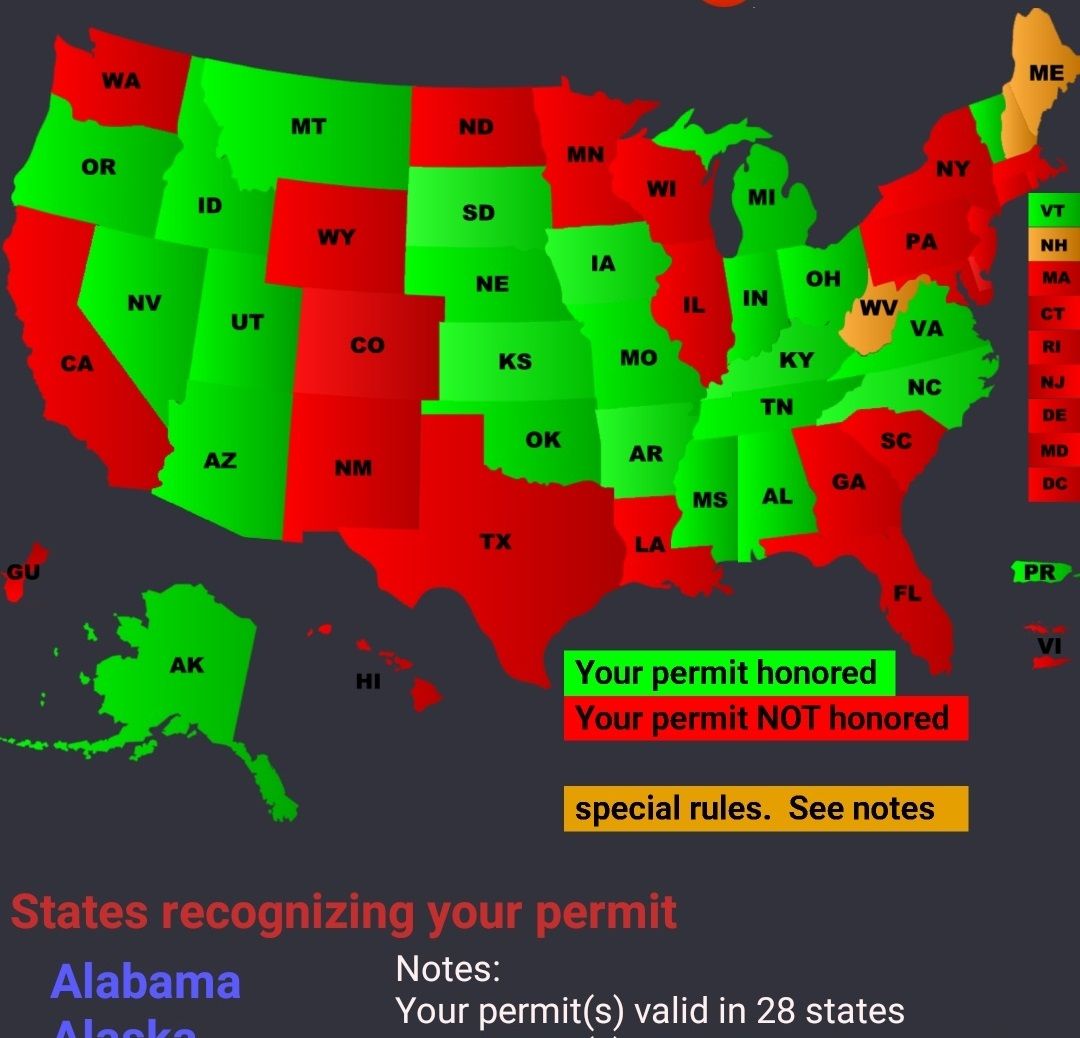 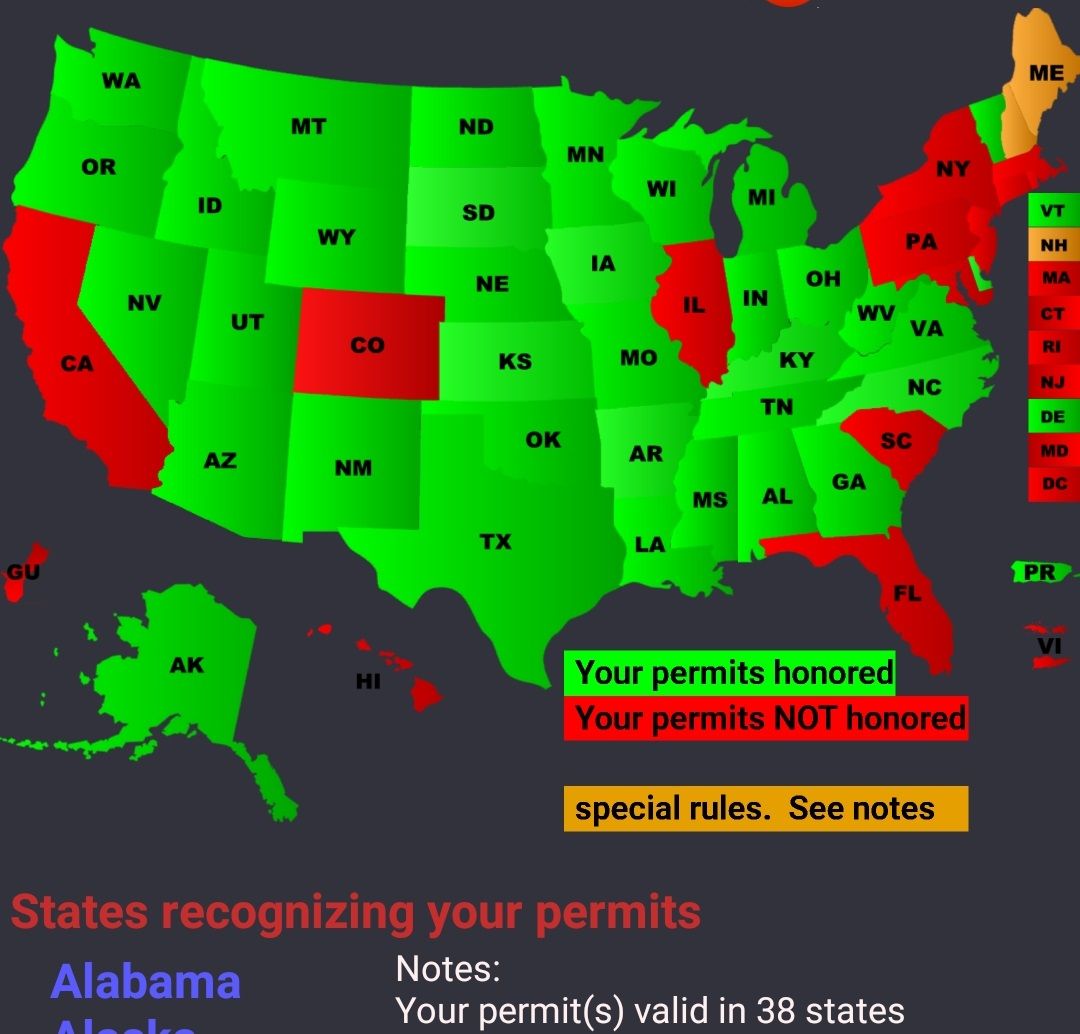 Florida is >$100 and only gets you FL. IMO, not worth it, and I don't go there but once every few years.

^^^This is why constitutional carry is so important. There are many reasons someone may NEED to travel, including work related matters. Nobody should be forced to disarm.
C

Montana honors almost all states conceal carry permits to the best of my memory without looking it all up again.

LAWS not only GUN LAWS change all of the time and I would NOT and NEVER HAVE trusted a map or a website that is supposedly up to date on GUN or knife laws. That goes for outdated gun/knife law books for conceal/open carry and general gun/knife rules for that specific state including using or carrying HP ammo even if it is only a 22lr HP cartridge. I may look at a map and website but I always GO to the .gov official website.

I did this when I moved over 2,000 miles one way to MT after my late husband died. I went to the .gov website and specifically planned my trip ahead of time in ALL ways. I took almost all of my firearms (I sold and gifted a few back east.) and ALL of my ammunition with me in my former SUV and former Coleman pop up camper. I was legal just in case that I got stopped which I never did. I have never even had a parking ticket in my entire life. (I no longer drive now. I am 69 years old.)

A person who travels a LOT should go straight to the state in question .gov website and check it out AND, if needed, CALL and talk to the local sheriff's department, etc. in that specific state if they have any other questions.

I believe that a person should NOT have to get 1, 2 or 3 permits just to exercise their right to keep and bear arms.

I told my husband that if some state does not honor a MT permit - they can kiss away our business and money.

He obeys the gun/knife laws and I do too.

WY had some small town police get after some out of state people who OPENED CARRIED in a safe and responsible manner. Their hand guns were HOLSTERED and the non WY resident was NOT being a donkey.

It was like my former state - NO ccw - one of the last remaining TOP 7 anti ccw states with a lying R governor who promised to change the CCW laws! LOL That was in the NEWS several years ago and I almost did not believe what I read about the WY incident but it was true. It was in WY, MT, and national news and on some gun rights forums too.

I have NO clue what that law is NOW in WY but it was not like that when we visited YNP many times, friends in WY and ate with a famous designer gun man and friend of my MT husband at the Irma Hotel/Restaurant in Cody, WY. (We were legal but the other visitors thought that they were legal too!)

According to what I have READ but not verified tonight - the state of WY does still honor my MT husband's permit. I no longer own, carry or shoot handguns.

Some MT gun laws have changed which I will not type all over. Plus there will be something on the 2020 BALLOT pertaining to what some of you NW people have had to live with when it comes to cities/small towns/counties that want to IGNORE or make new gun laws that go AGAINST THE MONTANA CONSTITUTION. IT - the ballot issue pertains to private sales and some other things. MOST MT people still have NO clue what is going on in gun rights and issues. They were clueless about the crapola with the M. city council and FOX too.

NO thanks to our REPUBLICAN so called conservative (LOL) AG Fox who is running for governor and messed up here in this college town BIG TIME. TOO much to say and my B/P does not need it now.

The SECOND AMENDMENT should rule for all open/conceal carry for guns, knives, etc.

If you are a dangerous CRIMINAL and a threat to society - you get to stay locked up in jail or get the death penalty if you murdered one or more people.

If you are a dangerous INSANE person and a threat to society - you get to stay locked up in an insane asylum and I believe that if you MURDERED one or more people whether you are FAKING being nuts or just plain freaking nuts - you get the death penalty too.

Jcon268 said:
^^^This is why constitutional carry is so important. There are many reasons someone may NEED to travel, including work related matters. Nobody should be forced to disarm.
Click to expand...

IT should apply to arms meaning guns and knives in this case.

The Second Amendment should rule unless you are a criminal or insane. SEE my post above.

My MT husband said that he will not visit WA or OR even if he did in the past.

I did visit WA and OR one time many years ago with him. I wanted to visit again but he said that they can stick it when it comes to our business and MONEY!

I figure that MT must be dense - we CONTINUE TO HONOR so many people with their RKBA and their states continue to screw us!

Gee, what happened to national conceal/open carry laws and hearing protection laws that were supposed to be pushed by President Trump?!

Constitutional carry is the ONLY WAY to go in my not so humble opinion!

So if I should HAVE to travel, which I doubt will happen, I would have to go alone because my MT husband will not travel to any state that takes his rights away at the BORDER.

Yet, the dumb bunnies in POWER let illegal aliens and other home grown criminals literally get away with murder, theft, fraud and votes and HONEST - legal gun people continue to get screwed!

MT concealed carry permits are recognized in 36 states. If you want a non resident WA permit it is easy. Money and a set of prints. Or if you have a MT permit you could get an enhanced nonresident ID permit that would give you 40 states which includes WA. National conceal carry died in the Senate prior to the 2018 elections. If the Rs take the House, keep the Senate and Trump is re-elected, it may happen next term.
C

The point is that he feels that he should NOT have to get an extra permit or an enhanced permit from any state and that they should honor his permit from MT in those states that do NOT honor MT permits from the gitgo.

That is HIS decision not mine but I do agree with him.

He has had his permit for a long, long time. (I think since they first came out with them or pretty soon after the fact. I am a remarried widow to him so I can't name the exact date.) He has been shooting since he was a kid. Competed for a long time even if he does not compete now. Shoots year round in bad weather too. Snow, ice, etc. Passes his renewal easily - clean record. Received his original permit pretty fast too. Worked with federal, state and local officials with a high security check background for all of his working life shy of some HS and college time jobs. He continues to renew his permit.

We the People should have Constitutional Carry and be done with it.

The more that gun owners continue to play the SALAMI GAME when it comes to x, y and z permits from all of these OTHER states who refuse to honor other states permits from the gitgo - the more the game of greed made by anti gun politicos and other control freaks will continue.

Screw them and the horse that they rode in on! My words not his.

BOTH of us feel that we should NOT have to ask the Nanny State for permission to exercise the RKBA issue when it comes to conceal/open carry even though we OBEY the gun laws of this country.

I believe that knife laws should be Constitutional Carry since they are considered 'arms' too.