Just wondering like the title asks...
I do and I have several and owned many .

Single shot shotguns go way back in our history , so that there is a big reason for me to like them.
I have a original flintlock trade gun ( a gun built for use in the fur trade ) and several "Smooth Rifles" all from the early 1800's to the 1820's.
A Smooth Rifle is a firearm built along the lines of a rifle.
It has a front and rear sight , rifle style stock and butt plate , some even have set triggers.
But it was made without rifling on purpose.

For more modern guns I have owned :
Ithaca model 66
Stevens model 94
Winchester model 37
And several NEF / H&R Pardners / Toppers.
Of the modern guns I only have a H&R Pardner in 20 gauge left.
Of the others they were traded or "gifted" to other folks.
I really liked the Winchesters I owned but sadly I could not hit with either.
Luckily it wasn't the guns fault ... The fellow I traded them to does far better with them than I did.

Single shot shotguns are fun to shoot and hunt with.
Light and easy to carry , my arms don't feel like lumps of lead at the end of a hunting day.
They are still fairly inexpensive , but prices aren't what they once were.
Where I hunt having only one shot isn't that great of a hardship ... Lots of cover here and when the bird or bunny takes to it they are gone.
So what this means for me is that after my first shot , I either have dinner or the critter escaping into the brush at Mach 3.
If I had a repeater it might not make a difference.

They also have a non-threatening image and or look about them.
I understand that this is subjective ....
But where I hunt , there is also lots of public use on the land at the same time.
And when I hunt with a muzzleloader or my H&R shotgun , many times the hikers , horseback riders etc ... I encounter during hunting season , seem a little more relaxed than when I hunt with a different style of gun.

They do have some issues and single shots aren't the end all or be all of the shotgun world.
The light weight I mentioned earlier can have severe recoil if heavy loads are used.
Many times the stock profile is of the one size fits none. And if your shotgun dosen't fit you , it makes hitting hard to do.
Some imported brands are "cheap" as in badly made with poor materials.
And while it isn't idea for defense ... I wouldn't curl up and die it that's all I had.

I never had much use for them when I lived and hunted east of the Cascades but I have grown to appreciate them since I moved here.

I had a magazine fed bolt action Marlin 12ga without a magazine so it was pretty much a single shot. It had the rare full-choke 96" barrel.. When I was 12, I shot a doe with it at about 100" (00 buck), that thing died so fast it was funny. 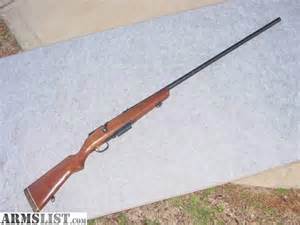 Never had a single shot shotgun. I've always either gone for pumps or doubles. I guess you'd have to reload quick to shoot trap.

My only single shot smooth bore. 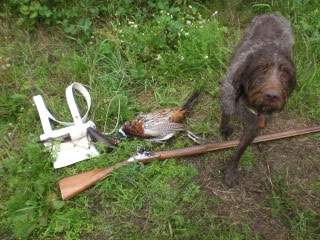 HuckleberryFun said:
Never had a single shot shotgun. I've always either gone for pumps or doubles. I guess you'd have to reload quick to shoot trap.
Click to expand...

Huck if you want a quick re-load ...
What I do is:
In my left hand I put two extra shells between my index and ring finger...
After firing I , break open the gun , with my right hand grab a shell from the left...
Load , fire , repeat...
Works pretty good . I've been known to gets doubles with my single shot this way.
Andy

Good idea. Holding the extra shells that way sounds a little like how big game hunters in Africa would hold two in their hand between fingers ready for fast reload.
OP

Yep! I stole that idea from some pictures I've seen of some of them hunters.
Andy

Nope, never saw much use for them.

I posted this before but after many reiterations of the prefect truck gun, I settled on a single shot 12 ga.
I keep 3 slugs plus two birders enabling me to confidently bag almost anything that comes across my path, Quale or bear, and can reload or switch loads in a heartbeat. Low cost yet rugged reliable performance. I never venture into the woods without it or my fishing pole fulfilling my Boy Scout oath to always be prepared. Pumps or 2 barrels for me.

My Dad had some kind of single shot break barrel shotgun that I started on. Kicked like a fing mule to a 10 year old. I learned how to get on pheasants real quick after missing a few. Blew a lot of gophers out of the ground. At 12 years old, I would sit over that gopher hole for an hour if I even thought I could shoot that 12 gauge.

When I saved my hay bucking money one summer and bought that 12 gauge JC Higgins pump at Western Auto I thought I had went to heaven. Still have that gun 47 years later.

Well Andy,I like single shot shotguns but I use a 22 rifle for birds and bunnies. Doesn't ruin the meat as much. Plus I suck with a shotgun for some reason.
I have a 1900's T Barker 410 my dad gave me years ago. Don't shoot it anymore. My dad fed us with that gun. He was a smoker so he carried the extra shell like a cigarette in his left hand. Shoot,break the gun open ,shove the next cartridge in,shoot again. He said it was his deer gun.
Now I have a cheapo 20 gauge break action for grouse and bunnies. Haven't shot it though. I mean I'm good enough with my 22

Best pump I have I got for $100 pre 2014 - made by high standard for Jc Higgins with an adjustable choke
Click to expand...

I learned to duck hunt with the J.C. Higgins Model 20 (with adjustable choke) that was older than I was. I loved that shotgun and wish I had it today.

It was later given to me by my Grandpa (along with a few other guns) when I was on my way from Ft Campbell to Korea. I couldn't take them with me so I left them at his house. Not too long after that, my uncle came down from Alaska and my Grandpa let him borrow my guns to use up there until I got back. No problem, I trusted my uncle. Well, that was in early 1989 and that was the last time anyone in the family saw my uncle, or my guns. The last anyone heard of him was one night when my Grandpa got a call from a hysterical woman saying "they killed him, they killed Don" and she hung up before he could get any information.

Wow, Sorry, that was a lot just to say that the J.C. Higgins Model 20 was my favorite shotgun.

Andy, I'm surprised you didn't mention Iver Johnson. Those seemed to be all the rage in my family and circle of friends that have owned single shot shotguns. I, however, started out on a 20 gauge stevens model 94 when I was 11 years old (right before my 12th. birthday). I loved that old shot gun and have taken thousands of jack rabbits, quail, chucker, lizards and cow pies with it. Man, does a 20 gauge (loaded with slugs) do a number on jackrabbits . Growing up in northern Nevada, the quarry was endless... Boy I miss those days!!!!! I still have that old shotgun, but I'm about ready to pass it down to my nephew, so he can learn how to make that 1 shot count. I have no regrets learning that way and I'm sure he'll love it just as I did..
Last edited: Jan 22, 2017

Certaindeaf said:
I had a magazine fed bolt action Marlin 12ga without a magazine so it was pretty much a single shot. It had the rare full-choke 96" barrel.. When I was 12, I shot a doe with it at about 100" (00 buck), that thing died so fast it was funny.

Yes, the old Marlin goose gun. I always lusted after one of those. I still think they are very cool. I almost bought one, but didn't think I needed anything with a barrel that long. If I remember right, the one I looked at when I was a kid had a 105" barrel on it. If you were quick enough, you didn't even need to pull the trigger, but smack a duck out of the air with one of those.

I've got one single shot right now, a 12-gauge H&R which also plays host to my Chiappa X-Caliber adapters.

A while back I had an old Crescent New Victor 20-gauge single shot I had picked up in a trade. I spent some time cleaning it up and it ended up looking really nice. After doing some research, I found the manufacturing date was 1910. These were marketed under a lot of different names and were able to be bought from a variety of stores and catalogs at the time. It was chambered for 2 3/4" shells and while some suggested perhaps not shooting it due to age, but the metal looked very solid, so I shot it anyway, and it shot great! I eventually sold it to make room for something else. Here are a few photos of it: