International Gun control in heavily-armed Switzerland faces May 19 vote, and the Swiss are grumbling

Gun control in heavily-armed Switzerland faces May 19 vote, and the Swiss are grumbling
Read More
M

Some years back, I spent time there and was absolutely astonished (given their supposed 'neutral' military stance) seeing the constantly overhead armed, roaring, very low flying jets and deuce and a halves brimming with heavily armed soldiers, everywhere...

Just say no, reject any inclination of gun control!!!!!

An armed society is a polite society...

JustSomeGuy said:
An armed society is a polite society...
Click to expand...


As long as it's not only the "undesirable" part of the society, like the "lawmakers" seem to want it to be.

orygun said:
As long as it's not only the "undesirable" part of the society, like the "lawmakers" seem to want it to be.
Click to expand...

Must be equal for all, levels the playing field...
M

The crime syndicate aka dems want their violent criminals, I mean constitutes to have a safe working environment...

MannyGlocks said:
Some years back, I spent time there and was absolutely astonished (given their supposed 'neutral' military stance) seeing the constantly overhead armed, roaring, very low flying jets and deuce and a halves brimming with heavily armed soldiers, everywhere...
Click to expand...


That's how they stay neutral... who's gonna mess with them?

Gun control in heavily-armed Switzerland faces May 19 vote, and the Swiss are grumbling

This is pretty scary and sad to see a nation whose heritage has revolved around gun ownership and shooting sports is now being forced by the Fascist European Union to submit to its laws or else it will be excluded from the Schengen agreement and no longer be allowed to be part of the European Union's Schengen bloc. I say to hell with the European Nazi Union and its fascist decrees that are meant to pretty much accommodate the leaders of these countries and turn the people into submissive and helpless peasants. As well, the large influx of Anti-European immigrants pouring into the EU countries from the Middle East, Asia and Africa are wrecking havoc on many countries. Racism and hatred against Europeans by immigrants is also spiraling out of control. So, basically, Europeans are losing all their personal rights and freedoms, infrastructure is crumbling, taxation is so high that people are now protesting and rioting in the streets (look at France Yellow-Vests protests as an example).

Switzerland is one of the safest countries in the world with one of the world's lowest murder rates and almost no mass shootings in decades. Yet, Switzerland has some of the most lenient gun laws in Europe. Mexico, on the other hand, has some of the strictest gun control in the world and has some of the highest homicide rates, including mass shootings, terrorism, gang warfare, kidnappings, rapes, etc. And, in Mexico, there is no telling how high the actual murder rates as the corrupt government does not properly report all its crimes accurately.

All I have to say is if the Swiss lose their gun rights it will come back to haunt us Americans too. This would be a great grievance and none of it is for public safety, but for authoritarian control. It appears Europe is going back to its Nazi-era roots of running its countries in a Fascist like manner and taking many lessons from the National Socialist European Party of the 1930s.

It will be a very dark day for gun owners and freedom loving people around the world if the Swiss lose their gun rights. It is time people come together and stand up to the tyranny of these fascist governments before we lose not only our gun rights, but lose all of our basic freedoms and liberties we seem to take for granted in this day and age.

Doesn’t look good for gun rights in Switzerland, at least if you believe the polls: 52% definitely support (bestimmt dafuer) the new gun laws, 13% rather support it, 1% don’t know, 8% rather against, and 26% definitely against (bestimmt dagegen).

The newspaper is one of the largest in Switzerland, and has a good reputation. 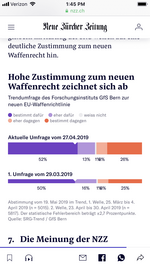 Leftists in the US foaming at the mouth

My cousin in Switzerland has been complaining for years about the ascendancy of wacky leftism there.

DB Wesner said:
Gun control in heavily-armed Switzerland faces May 19 vote, and the Swiss are grumbling
Click to expand...

Noooo they can’t do this! How are we going to be able to buy ex-Swiss rifles in the future? I like the way they’ve been doing it. Don’t change anything! K31s forever!

Looks like the new firearms law passed, with 64% voting in favor. The vote is seen by many, not as a yes to more gun laws, but as a yes to continue the Schengen and Dublin agreements (a point the anti-rights people here will be sure to ignore). A no vote didn’t have a chance.

The worst parts of the new law appears to be that one now has to prove that one is a member of a gun club (Schützenverein), or that one “shoots regularly” (no problem there ) in order to buy a semi-auto firearm, as well as registration of currently owned firearms. So this isn’t disarmament of the Swiss yet, but of course we all know it’s a slippery slope.

The MSM and anti-rights crowds will be pointing fingers and crying “See, even the Swiss can pass common-sense gun control, why can’t we?” in 3...2...1 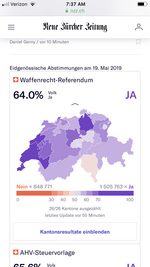 The Swiss bend to appease the EU. I guess they figure that they don't need guns, the Euro army will save them. Hopefully they will at least pass out rape whistles.

"Switzerland — one of the most heavily armed countries in Europe — voted to comply with stricter European Union gun laws in a referendum Sunday.

While Switzerland doesn’t belong to the EU, it is part of the bloc’s Schengen Area which is a zone that can be visited without a visa or passport by citizens of 26 European nations.

Following terrorist gun attacks in Paris and Brussels in 2015 and 2016, the EU tightened gun rules, known as the "EU Gun Ban", the bloc encouraged Switzerland to comply with its laws.

The projections from the gfs.bern polling outfit saw the measure passing in the binding referendum by a comfortable 67-33% margin.

If Switzerland refused, the country could have been excluded from the Schengen Area."

The rules called for:


Failure to adopt the changes could have forced Switzerland to leave the Schengen zone and the Dublin joint system for handling asylum requests.

I find it unbelievable that a nation of marksmen would give up their guns. The Swiss were the last people I would have guessed to give up their rights.

Well, for me and mine I say come and take them.

For those who follow the ex-pat Brit, Bloke on the Range (BotR), who posts very entertaining movies about shooting in Switzerland on Youtube, here is his take on the referendum that was undertaken today.

But first, I'd like to have a couple of words of my own.

This day will live forever as the day that the Swiss nation, a shining light in the personal ownership of firearms, dropped their collective pants and bent over for the nay-sayers. Just a reminder that they are NOT in the EU, but their elected cantonal majority cr*pped in their hats anyway, and have made anybody who didn't vote their way look like criminals.

And now, from BotR -

Bloke on the Range
1 hour ago
A quick (heh) FAQ:

Yes, unfortunately we lost the referendum. The new law is likely to enter into force on 1 July (people have been saying 1 June, but the Bericht des Bundesrates says 1 July).

Yes, it could have been far, far worse - initial drafts of the law were jaw-droppingly bad. Small mercies and all that...

No, this will not affect the continued existence of BotR. We will keep calm and carry on.

Yes, this will be a bit more of a PITA for acquiring semiauto rifles with 11+ round magazines or pistols with 21+ round magazines in the future. Cost mostly. And having to prove you're a sports shooter (club membership or regular private range shooting, no German-style nonsense with "disciplines" though) or collector.

No, "collector" is not defined. So each canton will make it up for themselves.

Yes, buying exactly the same firearm with a smaller magazine is unaffected.

Yes, it's whether the firearms is equipped with such a magazine, not whether it's capable of receiving one.

No, what "equipped with" actually means isn't finalised (the rules contained a provision that was clearly unworkable and would have criminalised 2 people sharing a car to the range if 1 had a 10-round Stgw 90 and the other a 20-round Stgw 90. Hopefully that definition will go away).

No, affected firearms already acquired before entry into force are unaffected.

No, there is no change with respect to full auto or downconversions from full auto.

Yes, there's a variant of an SBR law coming in - semiauto rifles which can be folded or telescoped down to under 60cm OAL without losing function are affected too. The wording doesn't affect fixed stock carbines that are always below 60cm OAL and doesn't seem to affect folders/telescopers which are already below 60cm OAL with the stock deployed.

Yes, this will probably result in newly-sold short rifles having their stocks fixed or a firing mechanism disconnect built in.

Yes, I have bought ahead pretty much everything affected I think I need for the channel.

No, we won't be doing a video on this until the Implementing Regulations ("Waffenverordnung") are finalised, cos there are too many loose ends at the moment. I'm planning on doing it with Ines Elena Kessler who did excellent work as a leading light of the No campaign in the media and is part of the Kessler Auktionen family.

No, we won't be relocating to the US just yet

Yes, the EU are extremely likely to come back in a few years' time for another bite at the apple.

Yes, if you have a general question not in this list, the answer is likely "we don't know yet" cos the Waffenverordnung hasn't been finalised.

National The NRA Might Be Weakened. Gun Rights Voters Are Not.