I recently picked up a used XL650 on here, and going through all the parts and pieces I've come across a couple of bushings that aren't marked and I’m struggling to determine what they are. The Dillon website is useless for this, since all the photos are generic, and a call to their tech support didn’t yield much more.

First up is this item - which I THINK might be an older nickel “Large and Magnum” casefeed arm bushing (PN 14397). It doesn’t sit down in the arm like the other plastic bushings I have, but it does sit in there and seems to fit if not sitting a little proud. 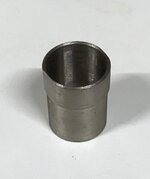 Second is this item, which I’m sure is a casefeed body bushing but it has no markings/words on it to identify which one it is (the other two I have say “Small” and “Medium”). Also, is it supposed to look like that on the end, or did someone beat the tar out of it with something? I am thinking it might be the XL/Magnum/45-70 casefeed body bushing, but without the markings, not sure. The ID appears close to the same as the above item. The edge almost looks like someone hacked at it with a chisel... Thanks in advance. I’ve got 9mm dies on the way and a few other loose parts, and looks like I need to get a few more to put it to use on other calibers, but I’m stoked to get started using it.

um...
Why not ask the seller
sorry for posting the obvious,

I managed to find his contact information again and reach out. He recognized the one, but not the other. I then went looking for the Dillon email address and discovered they had a way to upload pictures into their chat window (hadn't seen that before). The first guy couldn't help me, even with pictures. The second guy was able to identify the part other part.

So, for someone else looking for the same answers...