The US government has purchased a significant supply of radiation-injury drugs as the Russian president threatened the use of nuclear weapons. 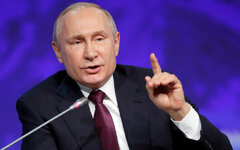 Vladimir Putin - AP© AP
A $290 million procurement of the drug Nplate, to treat acute radiation syndrome (ARS), was announced by the US Health and Human Services (HSS).
The government confirmed it was the first purchase of the drug, manufactured by the California pharmaceutical company Amgen.
The purchase comes after Vladimir Putin renewed his threat of nuclear war. In a speech last month he vowed to use "all the means at our disposal" to protect Russia and its people. "This is not a bluff," he said.
The US government said the procurement of Nplate was not in response to the war in Ukraine.
An HSS spokesman told The Telegraph: "This is part of our ongoing work for preparedness and radiological security. It has not been accelerated by the situation in Ukraine."


It is understood the HSS has been working with Amgen, and similar companies, for some years.

The US has maintained a stockpile of Leukine, a drug which also treats ARS, since 2013.
In 2017 the HSS partnered with Novartis, another pharmaceutical company, to determine if a product used for patients with low blood platelets, known as thrombocytopenia, could be used to protect people in the event of a nuclear incident.

The supply of Nplate has been procured "to save lives following radiological and nuclear emergencies", according to the HSS announcement.
"ARS, also known as radiation sickness, occurs when a person's entire body is exposed to a high dose of penetrating radiation, reaching internal organs in a matter of seconds," it said.
"Symptoms of ARS injuries include impaired blood clotting as a result of low platelet counts, which can lead to uncontrolled and life-threatening bleeding.
"To reduce radiation-induced bleeding, Nplate stimulates the body's production of platelets. The drug can be used to treat adults and children."
The Telegraph understands Nplate is approved for use in Europe and the UK to treat low blood platelet counts in adults, but there is currently no license to use it for other purposes such as blood injuries following ARS.

All fear mongering for billions in fun and profits, always. With all that NATO has done over the years, Putin has to be the most patient dude on the planet. Only a complete, corrupted media could paint a President trying to defend his borders from imperialism and encroachment as some form of evil madman.

"A person is smart; people are dumb" Agent K People today are nothing more than fear-driven zombies. It is sad to watch. The government says that there is "no linkage" between buying the drugs and what's happening in the Ukraine.

Been hearing reports on other boards about the mil moving a lot of equipment and supplies around and that it's related to post-nuclear prepardness. Again the official line is: "no linkage, just every day army stuff".

Stockpiles locked away in government warehouses will not do the public any good if they aren't distributed BEFORE the bombs go off. Playing with high energy atoms has its downside. Not only weapons, but electric power generation. When Chernobyl melted down in 1986, the supply of radiation treatment drugs wasn't available until later.

This is the second time around for me to live in a world with nuclear weapon saber rattling going on. I don't think it's wise to downplay the danger.

Do we honestly believe those meds are actually for the American public? $'s to donuts... if there is a nuclear use event all that gets shipped overseas to the locals with a, "A Gift from the American Taxpayers" card.

By the time radiation crosses our borders it'll be, "Sorry, but we're fresh out!".

Our government officials all have hardened bunkers. What do THEY need meds for?

Your tax dollars are paying for ISIS and other terror groups to fight in Ukraine. Could you imagine if you financed such a thing as an individual? You'd be thrown into a hole and never seen again. All about our global expansion, control and $$$$$$$$.

Burt Gummer said:
Your tax dollars are paying for ISIS and other terror groups to fight in Ukraine. Could you imagine if you financed such a thing as an individual? You'd be thrown into a hole and never seen again. All about our global expansion, control and $$$$$$$$.

They prosecuted Iran-Contra. Lt. Col. Oliver North knows a little about that.

The world is much more corrupt now. WEF, Klaus and their central banking FED Trillionaires run the show now. There will be no prosecutions or revelations about NATO, Ukraine, or Russia. Just what scripted narrative lies the MSM is directed to implement 24/7. As in most duped Americans are cheering on Terrorism, War mongering/profiteering, death and misery because the boob tube and SM says it is the politically correct thing to do now. Clown world. Or as Putin said so well, we are The Empire of Lies.
Share This Discussion
Link Email Facebook Twitter Reddit Pinterest Share This Discussion

After a big quake, a likely jigsaw puzzle of "islands"

Yesterday at 8:44 PM
Tony617
B
Can’t buy fish antibiotics on Amazon and other sites anymore?
2

Is the US better prepared for a nuclear blast today than it was 60 years ago?
2