I have a handful of old rifles that have been passed down. Many of them don’t have any bluing left. Some are considered family heirlooms, but have little monetary value. Several have old worn out or broken scopes on them.

I‘d like to get these shooting again, but don’t want to spend a fortune to do so. What do you all think? Find some old scopes, re-blue them, etc?

Is there a budget scope out there that still matches the old school look?
Here is a picture of an old Savage that needs a replacement scope, and the rear sight possibly removed.

This is the best kept secret on the interwebs! I have used them many times to match a vintage rifle to a nice optic, mostly old Red Fields! Ask your local gunsmith. Chances are they have a few old or cheap scopes customers swapped out and didn't want to take back.

Bit different scope on this one. The rear lens is bouncing around. Looks like it was dropped and landed on the scope.

Hunting for old scopes is difficult with the stay at home thing.

I collect old El Paso-made Weaver scopes from the 50's and 60's, as I bleeve that they represent THE definitive American-made rifle scope of that time. I have a few K4s and older designs, and the 3 -9 variable on my K31 that I leave set on x4 to comply with the rules. I paid $40 for that great scope, but I also bought four others at the same time for $80, so I don't feel I was ripped off.

I think that the earlier one looks better, but that's just my opinion.

Here's a real oldie, though - a Walther Sport Modelle 2 from 1930 with a contemporary scope - 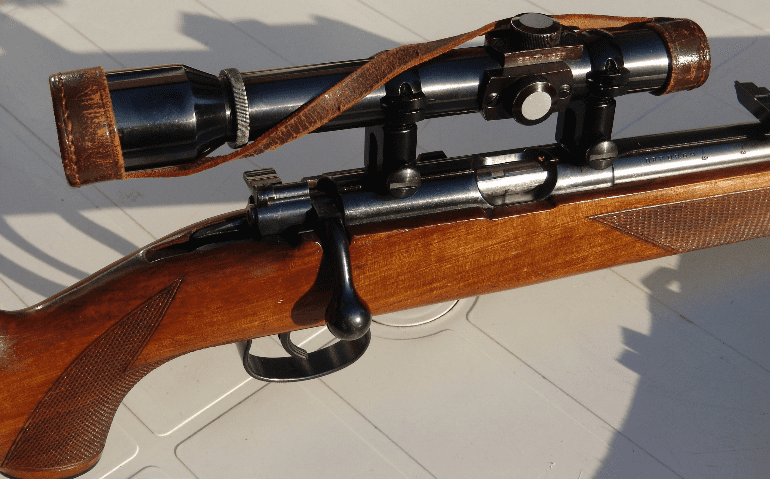 I'm embarrassed to say that you've seen them all before, but it's true, you must be sick of seeing 'em by now.

I also have a little collection older scopes from around 1905. I might dig them out and take a pic for you if there is any interest. Oh, and a v. odd US-made prismatic scope for cheapskates...

Ura-Ki said:
This is the best kept secret on the interwebs! I have used them many times to match a vintage rifle to a nice optic, mostly old Red Fields!

Thanks for sharing this secret OP. I won't tell but it may cost me some $$$ for new rings
D

Awsome collection tac! Thanks for sharing.

I was recently amazed by the selection of weaver and redfield etc scopes on eBay. Search for “vintage scope” and go from there.

Hey @tac what mount is that in the Schmidt?

Rings from Warne. Made in Tualatin, OR.

If you DO deal with them, tell them I sent you, father and son team of Piérre and Latigo St Marie are like family, capisce?
Last edited: Mar 26, 2020

The only old El Paso Weaver I have mounted at the moment is a K2.5 post recticle on my 1893 Mauser, which was a Boer contract rifle (1898) that was part of a shipment that was turned around at South Africa by the British blockade and returned to Berlin. Most of the shipment was sold to Chile, but this particular rifle was retained and made into a sporter at the factory, my guess by an employee for himself. The wood tooling marks in the mannlicher stock are identical to another Chilean DWM 1893 I have. Did I mention the 7X57 is a shooter too...? And the scope is still in great shape for being over 70 years old.

I had a Win 88 that was missing the front sight so I picked up a Weaver KV 2.5-5 from Ebay for $50-60. I think it'd been re-worked in El
Paso while they were still doing that because it was just as clear as my Leupolds and Nikons. I sold it with the rifle and I'm kind of wishing
that I'd have kept the scope. It'd work nicely on my Marlin MN 22 mag.
You must log in or register to reply here.
Share:
Facebook Twitter Reddit Pinterest Email Link