because you asked: AK-47 trigger

sweetbeard said:
I would be interested in your proccess.. I have a ( bootleg ) dvd on how to tweak an AK trigger, its called FROM AGI

I wonder what you have going on..

Maybe we should get a few people together and do a few Triggers at once.

I'll make this a dedicated thread, rather than hijacking your thread on your WASR-10, upstairs...

About 8 years ago - over on gunsnet.net - I posted threads concerning the "Left Hand AK" that I built, essentially reworking the rifle to have a left side charging knob for the bolt carrier, along with using a FAL selector for the safety, and replacing the rear sight leaf with a Weaver rail, upon which was affixed a Tasco Optima red dot sight.

Also in the threads, I outlined the proceedures for reworking an AK trigger/hammer/disconnector so that the release characteristics most closely resembled a finely tuned 1911. Indeed... when the "LH AK" was sold to an Army Ranger friend in Pasadena, he remarked that the trigger was better than the 'smith tuned Timney trigger in his Remington 700, in .308. (Rick314, if you post at gunsnet.net) 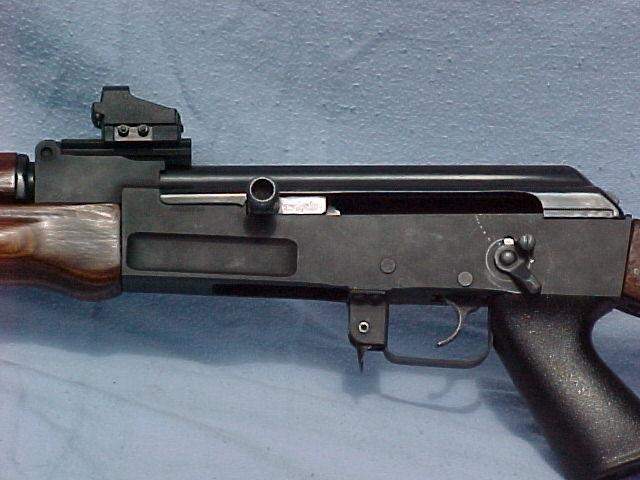 A close-up of the bolt with the SKS bolt knob welded to the left hand side of the bolt carrier: 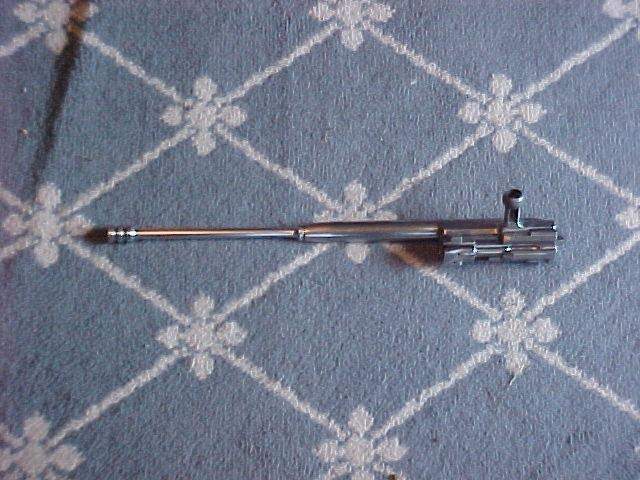 First step in re-working the trigger group is to trim the "wings" on the hammer; I prefer to use the milled double hook hammer and trigger even in stamped receivers for a few reasons...

1) since the engagement of the hooks onto the hammer surface is so short, you have twice the area of hook engaged for safety concerns.

2) you can get a crisper release with the double hook trigger.

3) you do not have to weld an over-travel stop onto the trigger, just file the left side in front of the pivot until it just barely releases before making contact with the base of the receiver.

If you look at the modifiede hammer on the right, you can see the scribe line demarking the engagement depth of the hooks onto the hammer wings; in my first attempt, I merely ground away on the hammer wings until the engagement was cut in half... which cut trigger movement required to release the hammer to half. In later versions, I got abit "greedier"...

Recommend you start conservative, and work your way up; it is easier to grind more metal off than it is to weld it back up, or to throw away the part and start on a new set.

I used emory cloth to strip the finish off the metal, then polished with Mother's Mag Polish until it has a mirror like finish. The more "stiction" you cut away, the smoother the release, 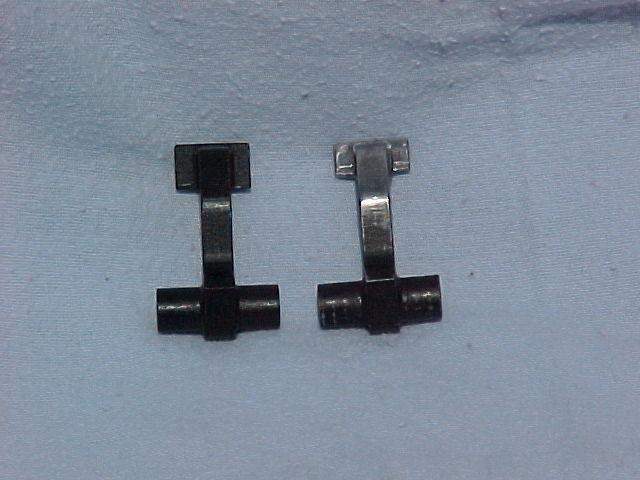 Interesting, I am going to grab a few $7 trigger assemlies on gunbroker and try this out.
OP
T

On the trigger, I squared the edges of the hooks where the engage the hammer wings, taking away most of the "creep" (which comes from the multi-angle engaement portion of the hook). This alone would make the release more crisp...

In front of the pivot - and above the trigger pad iteself - you can see the welded up place which formed the over-travel stop. The idea is to have the trigger just release the hammer as the stop makes contact with the floor of the receiver.

The welded up section at the back of a leg of the trigger is to make the safety operable, once again; indeed... with the work being done, the trigger would release the hammer before the trigger would contact the block portion of the safety, even with the safety "engaged". I build it up and then file it back down until there is absolutely NO trigger movement possible with the safety engaged. When you have zero take-up, it releases in 1/16th inch of movement, and absolutely zero over-travel, you want that safety extremely tight when engaged. Because you haqve chamged the release characteristics of the hammer and trigger, you must also modify the disconnector, or the disconnector will NOT catch the hammer on its reward movement, and you will find yourself hammer down on a live round (requires a "safety sear" to retard the hammer until the bolt has seated to become a "full auto" rifle... more likely is that you MIGHT experience an out-of-battery ignition, also known as a KA-BOOM... hazardous to both rifle and user). Observe the foot of the disconnector and how it has been filed away, increasing the angularity of the disconnector until it will once again engage the hammer. Because the hammer, the trigger, and the disconnector all work in harmony with each other, it is critically important that they are modified to each other as a group. If you get it wrong, you might also have built a trigger group which will fire when you pull the trigger, and again when you release the trigger. While you might find these double taps entertaining... the BATFE most certainly will NOT!

CONSIDER THIS YOUR LEGAL WARNING SO AS TO PREVENT YOU FROM BUILDING AN ILLEGAL RIFLE! Every surface which engages ANY other surface, I polish to a mirror finish, and then lubricate with Tetra Gun Grease (white).

The best trigger which I have ever done was in a PSL, using a Russian milled receiver AK's trigger group, when the displayed rifle was set to be destroyed from the museum at the airbase in Spokane. The "grain" of the Russian steel was exquisite, and it gave me a woody (rhetorically) working with this fine steel. The PSL? Cut its group in half with the trigger work, and the trigger had a 2 pound pull, smooth as snot on glass...

There is a certain SEAL type vet in the Spokane area that has a PSL which will put up repeatable 1/2" groups... at 100 yds. And it maintains that accuracy... for an "undisclosed" distance.

Most are unaware of how much the trigger release affects the accuracy of a rifle. That LH AK? Would deliver 1moa on Sellier/Bellot ammo... (milled receiver, cryo'd barrel, and more than just a few "proprietary tricks")
OP
T

The heart of the "LH AK" was the FAL selector...

Because the AK receiver is wider than the FAL receiver, the barrel of the selector had to be extended to reach across the with of the AK receiver; I used a standard AK hammer pivot pin to do the job.

The notches in the FAL selector barrel were welded up, and then a single groove was filed back into place to allow trigger movement when in the "fire" position.

The Israeli version selector was chosen because it is held in place by a circlip on the inside of the receiver, and you can see the groove for that circlip. I spaced it by putting a thrust washer between the wall of the receiver and the circlip.

And yes... I mocked up a FA version of the trigger group; before our SpecOps went into Afghanistan, there was a contract on the table for an M-16 which could use AK-47 magazines and ammo, enabling "resupply" on the run. Since the concept of a fussy M-16 gas system attempting to survive the generally dirty burning AK ammo is rather the monumental brainfart, the "LH AK", with similar controls, AK reliability, and greater accuracy than the best of the M-16 pattern rifles.

Unfortunately... I did not get the FA version completed in time to submit it... sweetbeard said:
Interesting, I am going to grab a few $7 trigger assemlies on gunbroker and try this out.
Click to expand...

Please read the whole of the thread BEFORE you start grinding/filing/polishing.

Don't want no ND because someone did not read all the way through...

When I first built an AK with the trigger mods - an SLR-95 with an Ace sidefolder "Paratrooper" stock - I tried it out at the indoor range just south of Clackamas Town Center (P.S.T.C.). Since they require "proprietary" "non-lead" "eco-friendly" ammo... I had to purchase two boxes from them. I loaded up five rounds into the magazine, then fired extremely slowly, attempting to discover if the rifle could be MADE to mis-function and fire when releasing the trigger. Good to go...

I loaded five more rounds, and slowed the release even further, dragging out the release as long as I could. Good to go...

Having done my testing and finding all was good, with 30 rounds still remaining... I loaded up the magazine, then fired away ten triple-taps. Got the ROs all excited, all over themselves... They came rushing in demanding that I prove that the rifle was not "select fire". Guess there is something about a series of half-second triple taps that gets people's attention.

And? Just as icing on the cake? At 25 yds to the target, the triple taps averaged 2 inches from first round to third round, angling up toward 2 o'clock.

Take your time, and you can massage your trigger group to do the same.

I wish I still had my AK to try this with.
D