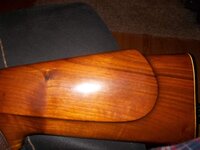 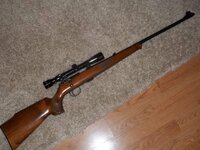 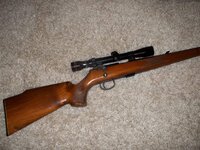 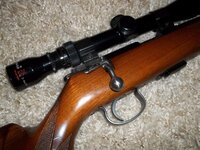 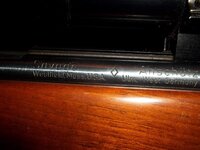 Hello, I am new and this is my first forum. I inherited my fathers anschutz 22lr bolt action. He purchased it new I assume. I just don't know how to find the model or value. The sentimental value is more but I need to know if I can bang it around or should I handle it with care. Thanks for any help

If it doesn't looked banged up, I wouldn't be the one to do it!

just saying if it was worth keeping nice and pretty. Or if I did bang it up would it matter, I just would like the model, it looks like a 164 sporter but I am clueless

End times is in a couple months I think so it probably doesn't matter.

To my eye it looks like a Savage imported Anschutz 164...If it was mine I'd shoot and hunt with it.
I know that they are uncommon and can be pricey , depending on just who is selling the rifle...but they were meant to shoot after all.

Speaking only for myself , marks of use , be it a loss of bluing or a ding in the stock really don't bother me...neglect and abuse is another matter altogether...
Andy

Please dont bang that pretty rifle around. Your dad kept it in great condition, you should do the same. Shoot it and take care of it. If not, sell it to someone that will appreciate it.

Have you tried to price-compare on auction websites? GunBroker for example? Have you tried contacting Savage, or gone to their website, to track the serial number?

As you can see your father took very good care of it. Definitely do the same and pass it to your kids. Take it out on occasion and run a few rounds down range. Clean it, wipe it down, cover it (to save from safe-kissing that wood with something else in your safe) and enjoy it, the memories, and pass along those stories to your kids every time you take it (and them) to the range.

What do you consider beating it around?

I would love to own that rifle. If you abuse it or just plane trash it, then that would be a insult to humanity. IMHO of course.

Oh and welcome to the forum.

Its "value" will only decrease if you don't use it. If you abuse it, your value to your fellow man will decrease.

jodybrox said:
just saying if it was worth keeping nice and pretty. Or if I did bang it up would it matter, I just would like the model, it looks like a 164 sporter but I am clueless
Click to expand...


If you are the kind of person who can 'bang up' a beautiful older rifle in almost mint condition, something that many of us here (me included) would tear out of your hands and run, then go right ahead and be my guest. To replace this rifle today with one of similar grade and specification from the world-famous Anschutz factory would likely cost you about $1000 [Price edited, thanks to Bud's Gun Store]. Plus the scope, of course.

These Anschutz rifles shoot out-of-the-box like a target rifle, but than that's what J G Anschutz are famous for. Almost EVERY gold medal for shooting .22cal rifles since the early 1970's is down to this company. The DOM can be found as part of the 'half-stag antler' Ulm proof mark, in the form of the last two digits of the year.

This rifle, without the scope and barrel harmoniser, now over 65 years old, is STILL valued north of a thousand dollars. Y'see, it has the magic name on it that guarantees that it will shoot the *r*p out of most lesser rifles, and continue to do it forever - more or less.

This is how it looked after I'd removed the thin layer of rust, but before I refurbed the stock. The left-hand side had been really badly dinged by carelessly putting it back in the sharp-cornered gun safe over the years. The shooting log tag that was tied to the bolt - separate and rusting - show it had last been used in 1982. I got asked to clean it up for resale. Pushing a brush up the bore resulted in the production of a six-inch-long dust bunny, and shooting it, to see if it worked, resulted in a one-hole group of eight rounds - all I had left in my box. I paid the club £25 for it.

It had been hidden away in a corner gun safe that everybody had ignored since at least 1982. The thin layer of dusty-rust was taken off using a succession of Birchwood-Casey lead-removing cloths - VERY carefully. The varnish was hand-sanded off using great care and attention to ensuring that all those sharp edges stayed, uh, sharp. 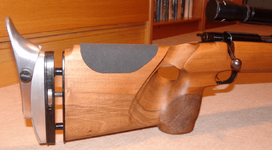 The chequering was freshened up using a screwdriver and more care. The alloy butt plate system, still available for around $700 from Anschutz, was brought back to life using good ol' Mother's polish. Never saw anything but a lovely piece of wood an any Anschutz, either.

Got a x36 Weaver T36 as well, but it was too modern for my taste, so I sold it to a guy to put on his Savage-something - making a decent profit doing so.

The doodad on the muzzle is a German-made barrel harmoniser that allows you to tune the barrel to the ammunition you are using. I don't pretend to be any kind of a crack shot, but this thing sure do shoot some. That device cost ten times more than the rifle, BTW. 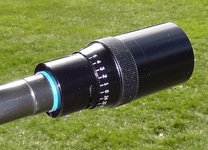 Based on sold auctions on gunbroker, your rifle is worth $500 plus or minus. I have a target model that is quite accurate. Savage imported these and put their name on them. Although they are identical rifles, the ones marked Savage are worth less.

Fantastic rifle with a great heritage for you.

I can't say what you should do with yours, but I inherited my dad's Anschutz 1418 mannlicher in fantastic shape after a lifetime of hunting small game with it. I use it when I take my son out in the woods and hope to leave it to him as well cared for as it was left to me, and that means using it. It's my favorite rifle.

Plus like people have said. They shoot lights out!

The amount its worth, depends on what the future holds.
If you might sell it, then as mint as possible would be sound advice.

But if you are keeping it, why let it it another 50+ years in a safe doing nothing.

Beautiful rifle...I would take it out and shoot it, but definitely handle with care. This is what you would consider an “heirloom” rifle.


Yup, a whole five bucks less than a thousand.

I posted a 99% rifle with box and a national audience to find the right buyer. That's about as good as it gets.
This gun would probably be a $600 rifle here if sold in our ''Rifles for sale'' section.

I have plenty of firearms, I just didn't have one of those, banging around to me is using it to shoot and hunt etc, I wasn't going to use it as a hammer, I guess I sounded like a person that just got his first 22, thanks for the replies I'm not going to beat something up now that I am informed. The usa Savage rifle I have had is a 200 cheap 0, so when I saw savage on the 22 I naturally wondered, When I saw West Germany then I put the hammer down, I collect West German Sigs,

Medic! said:
I posted a 99% rifle with box and a national audience to find the right buyer. That's about as good as it gets.
This gun would probably be a $600 rifle here if sold in our ''Rifles for sale'' section.