I’m selling off some safe queens third on the list is my S&W .38 spl victory WWII revolver it’s in OK/ GOOD shape. it’s one of the revolvers given out to the civil defense after WWII had ended. You can tell because of the V stamped in the the serial number. I’m looking to get $DELETE. new price $550.00 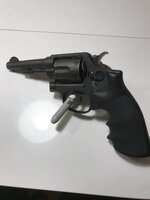 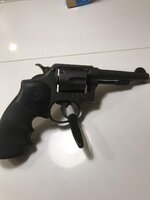 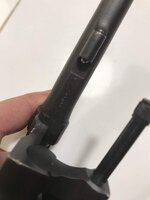 Did someone scratch "civil defense" on the left side of the frame there?

Is there a "property of" marking?

Certaindeaf said:
Did someone scratch "civil defense" on the left side of the frame there?
Click to expand... 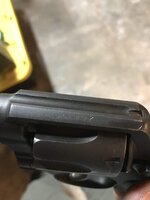 Any chance you might still have the oiginal grips?

Nope I never had them, the pervious owner lost them

I don't know the full history on the civil defense but it looks like yours isn't the only one with these markings.

It's possible a certain number of Victory S & Ws wound up in the same lot and location and were inscribed as such by the same person with some sort of electric engraving/scribing pen. It would be an interesting story if ever revealed. My US Navy Victory fortunately is free of markings!

RVTECH said:
It's possible a certain number of Victory S & Ws wound up in the same lot and location and were inscribed as such by the same person with some sort of electric engraving/scribing pen. It would be an interesting story if ever revealed. My US Navy Victory fortunately is free of markings!
Click to expand...


Basically best I can tell these revolvers were originally contracted for the US Navy and then transferred to the Office of Civil Defense where they were engraved with the civil defense markings, The OCD transferred them to police departments to arm reserve officers in the event of a national emergency. Definitely, some interesting history on this gun its a shame its been modified.
The Collection - US Military Revolvers

I so wish I had the funds for this revolver....Its so cool!
Good luck with your sale!
Andy

My Mom would reminisce about her dad. He was a guard @ local steel plant in PA during WWII and took his job very seriously. It was his contribution to the war effort. She would describe him coming home, taking off his helmet and gun belt, wiping down his gun, telling her "for the umteenth time" that this is not a toy and carefully putting it up on a high shelf. She didn't know guns very well but described a revolver. Very likely one of these S&W's. I think Colt made something along these lines too.