The cylinder on the Wrangler is made of steel.

Mister Bisley said:
I think I’ll be getting one as well. They’ll be available for under $200. Jeff Quinn seems to like his...

That review makes them look VERY nice for the price. For people who want a SA .22 like this I can't see how this will not be a huge hit.

Found a place that will have all 3 models. I will most likely pick up all 3.

I will get one or two

Still Waiting for mine to ship ...

Ruger tried an aluminum alloy cylinder in some early single sixes and they were a flop. I bought one for $300 and made about $1000 on it. Now I don't have the gun or the money. I think I'll buy one of these

Mine has shipped!! got shipping notice on Friday! So, they are entering the pipeline ... got a notice from Kentucky Gun Co as well that it was in stock, but by the time I went to look they were again out of stock. I think these will fly out the door for a while ... anxious to get it to the range!

Given the price point on these compared to the other choices, and the (so far) very positive reviews, I can see why these are flying out the door.

Yes I can see that too.

I am not a fan of the older SA grip styles though. I also prefer the option of DA in revolvers - especially for centerfire.

But for .22 RF, I would almost always shoot it SA so not having DA is not a big deal.

Maybe Hogue will make rubber grips for it? Maybe the Single Six grips would fit?

Another Wise Move by Ruger: Single Six Grips will fit, so lots of nice options IF necessary ...

I have a Heritage. 22 that probably needs to be retired. Timing is off and it's not worth fixing.
When the hype and hoopla dies down, I'll be filling that niche (and my western crossdraw holster) with one of these little guys.
Smart move by Ruger, gonna really hurt Heritage Arms' sales.

Saw one at LGS and resistance was non-existant. Followed me home after I left.
First impressions are:
It's not a single-six for $180, but it's as close as you'll find
I like it better than a Rough-Rider, feels more refined
The gap where grip meets the frame bugs me a little
Swing open the gate and there is no click indexing for loading
Looks are growing on me, but still a kinda homely looking piece
Weight, balance, fit and finish are quite good.

I have not yet shot it. I will put it to the test this week. 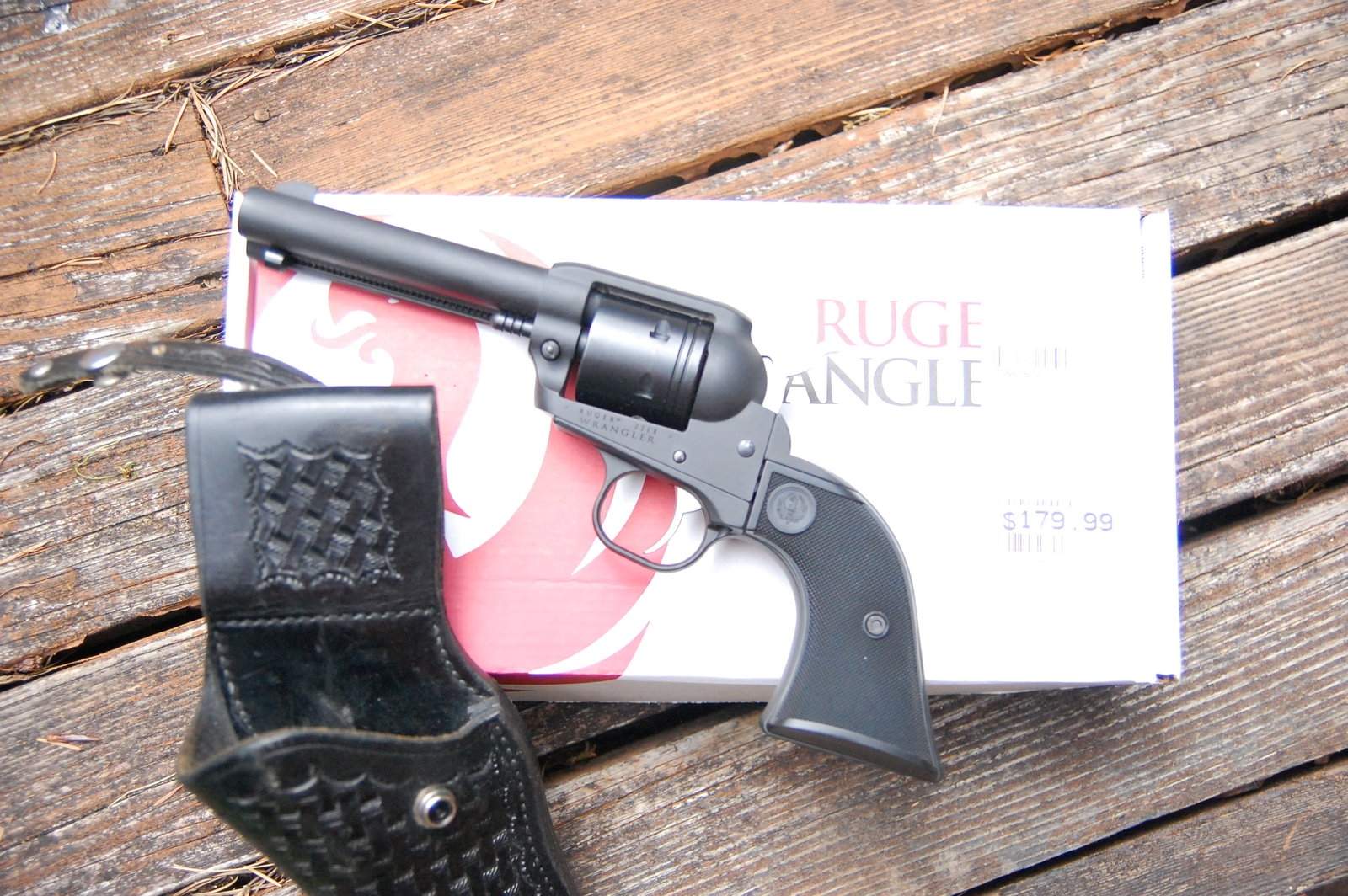 Well a health hiccup kept me away from the range, but I got out today to try it out. Shot very well and as usual for .22 handguns, various ammo performed differently. Best was with the Winchester M22. Shot at 15 paces with little to no wind. First target was offhand and splatter target was resting grip on solid surface.

My ability with old eyes and fixed sights leaves much room for improvment, but this fun little shooter will provide needed practice.
Biggest takeaway was I didn't think twice about banging it around as far as laying down on the tailgate, etc.
It seems to be what it's made for. And for putting the hurt on tin cans. 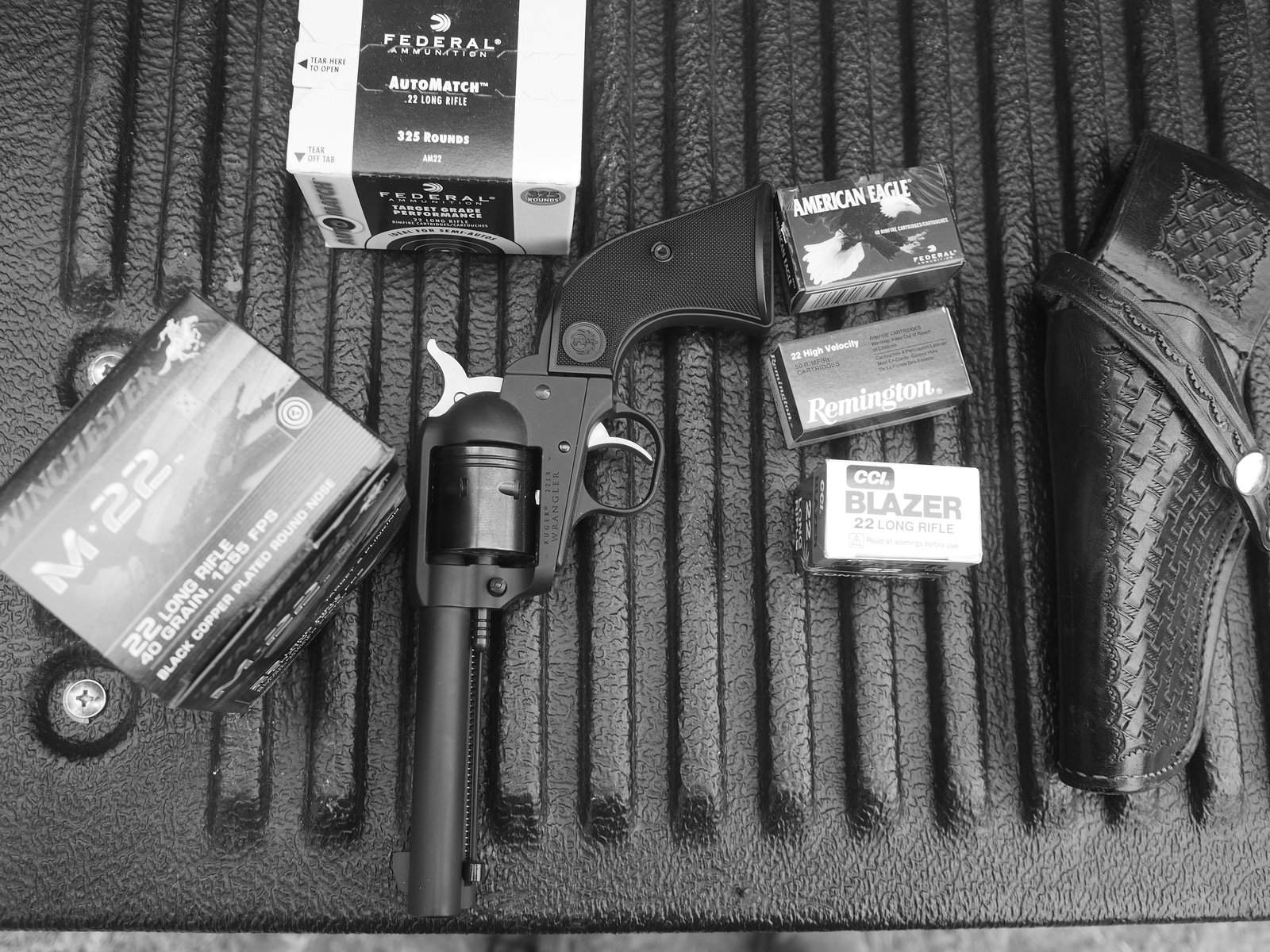 Fondled one of these two days ago and at $199, I resisted so hard not to come home with one.

Only had black and I would prefer the silver. But I could do all black, just need more pinky finger on the grip.
M

I think they're gorgeous, but I have some objections preventing me from buying.

The idea of shooting 6 rounds and then taking a lot longer to laboriously reload the cylinder than it took me to shoot it just doesn't appeal to me...

I wonder if there are others with a similar objection...?

I recognize they're a bargain, but it comes with ye olde fashion, bothersome (for me anyway) too long a time reloading for the fun reward, bargain or not...
Last edited: Jun 6, 2019

Well, you're either a classic Single Action revolver fan ... or not! To me, the speed of ammo consumption is not the only measure of fun in shooting ... the ability to dispense large quantities of ammo in record time is obv iously not the thing with an SA Revolver. I do know this, just as big a smile on my face while cocking and firing and reloading this little guy! Ruger has done a great job with this gun ... it works great, feels great in the hand, they've done a masterful job with the cerakoting of 3 different metals used, and I'll even say it has very decent trigger ... it's a .22 plinker that anyone can afford, and hallelujah, ammo is cheap and plentiful ... and it's NOT FUSSY about ammo like ALL semis, especially in .22. That said, I find I go through a lot of ammo each time I take it to the range, usually 200 rounds in short order, and it doesn't feel like a slow, cumbersome process. It's just FUN!

Bottom line, it's a real Ruger SA pistol for under $200. If you hate it, folks will be standing in line to take it off your hands, and may not lose a dime!

You make some great points.

What's fun for some is a pia for others.

Heck, I even know some to actually shoot black powder muzzle loaders...I use to be one that did that too, but eventually lost interest as it took longer to clean than I got to shoot.

I saw one at the LGS. and after handling it, had a very hard time not to whip out the credit card. It seems built to last, and at that price, seems like a solid buy. But, I saw my Single Six saying that I was cheating on it, and held back.

Single actions are tons of different type of fun.

But a 6 round single action brings a slower, you must take time to hit things challenge, to the game of plinking.

They are also superb training guns. They teach new or younger shooters to take their time, because if you go fast and miss, your stuck reloading to try again.

My dad gave me his Colt single action, it was a gun I grew up shooting. It was a great pistol to learn on. Now, I hope to use it to teach my son in time.

I still might pick one of these up if they drop down to $150ish. At that price, once comfortable, I can literally let the kid beat it up and I wouldn’t be as concerned as if he was shooting the generations old color case hardened Colt.
You must log in or register to reply here.
Share:
Facebook Twitter Reddit Pinterest Email Link