No load data_ what to do?

gmerkt said:
Bottom line, at 34.0 gr., you're up to the max. recommended load using a substituted bullet and a ball powder.
Click to expand...

Theres no load data for Hammer bullets. Once you replace a major component like the bullet your on your own. I do suspect there is something to Hammers PDR drive band technology, I dont have much experience but these Hammers shoot different than all others ive handloaded... they all shoot the same accurate group regardless of seating or charge, as advertised. I think this is why many hunters are raving about them right now.
Im also not just only going by primer condition. Im including velocity and even fireforming size. At 34g my velocity was way low for any 30-30 and the brass shoulder barely fireformed. If I was even close to max at 34g I woulda blown up my rifle now at 37g.
yeah, I ignored the guy claiming 2800fps.

I did some loading this week and in my unscientific way checked for compression and do not think I am compressing the load at 37g but am close to full capacity. Im going to zero at 37g/2400fps... Im not going to chase another 100fps if it means compressing the load but did load 4rds at 37.1g to check velocity and pressure signs. Im hoping to get out shooting today so I gotta get offa here.

Maybe Hammer has reinvented the wheel with bullet technology. If this product is superior to other bullets offered, it's too bad they don't provide data for it. Basically, Hammer bullet customers must rely on the same process as Tesla self driving cars, that is, so-called Beta testing. You try something and see if it works. All that ballistic testing that goes into published data by the major manufacturers is expensive to compile. The biggies have the money to do it, smaller companies do not. So both bullet customers and Hammer are flirting with liability issues, to some extent.

We see this some when sellers offer surplus and Brand X powders. "It's like (plug in a known canister grade powder) only a little faster / slower." Another example, some of the factory seconds bullets that Midway sells from time to time, one-offs, manufacturer unknown, weird weight, etc. I admit to having concocted my own loads when no known data was available. In one or the other reloading manuals, they advise against extrapolating your own loads. Which some of us do anyway. Sounds like you're on top of it.

gmerkt said:
Maybe Hammer has reinvented the wheel with bullet technology. If this product is superior to other bullets offered, it's too bad they don't provide data for it.
Click to expand...

Ive been following them on the LRH forum where the owner himself participates in discussion (he gets 2525fps with this bullet...) and answers a lot of questions and my impression is Hammer is a relatively new company . I dont expect a new company with a new technology to immediately get load data published but my guess is they are gaining a following because their bullets simply are performing on game and their PDR grooves are really simplifying load development.....

What I'm experiencing with their bullets is not only interesting but exactly what they are advertising. They greatly reduce load development time, as advertised just work up to your (safe) desired velocity and zero. Hammer bullets are not sensitive to seating depth. This is what Ive experienced with my ladder tests they all grouped very well and in the same spot despite the increasing charge weights. The first time Ive experienced that. I still haven't hit pressure signs...

I got out shooting today and zeroed in on my 37g load. I tested 4 rounds at 37.1 and they grouped the same. Im home and just starting to go over my velocities and targets. This is the first time Ive shot groups less than 1.5" in my lever gun. I'm glad it's working for you.

Winchester came out with the Angle Eject feature on 1894's around 1983, so there is no reason a scope couldn't be easily mounted on a .307 chambered rifle.

gmerkt said:
I'm glad it's working for you.

Winchester came out with the Angle Eject feature on 1894's around 1983, so there is no reason a scope couldn't be easily mounted on a .307 chambered rifle.
Click to expand...

I was sooooooo tempted this year to buy this Henry lever gun in 45-70, it was so perfect for me with blued steel octagonal barrel, CCH reciever and beautiful dark wood furniture.
I didnt....

I love my old 3030 and have no need to replace it. My dad gave it to me under the tree when I was 16. I'm not trying to make it something more than it is, I'm just simply maximizing my handloading for it. My average velocity is still a tad under 2400fps and I'm calling it good for this year because I need to get back out scouting and there's only a 6 weeks till deer season. I'll still slowly creep up on velocity over winter for next years hunting, I also ordered some CFE223 to try as I think the HLVR is too slow for the lower friction Hammer bullet (I do think I'm right near or at case capacity...). Anyways.... I'm planning on loading up about 40 rounds and this time heading to my gun club and shoot from a real legit benchrest and group it at 100 and 200yds. I need to make certain I can repeat my handload. I should be able to verify that with less than 20 rds and save the others to hunt with.

I have a bolt action rifle for elk but its caught up in gunsmith limbo waiting on a new barrel and wont be ready this year, which is why I'm using my old 3030 this year like old times when it was my only rifle. I cant complain.

A follow up,
I was tempted to run another ladder and chase that extra velocity but decided im compressing the load, I think...
I dont feel any compression or get any bullet creep so this was the only way I could think of to check....
the length of the bullet is seating past the neck/shoulder jct where it appears my charge is at. I dont see how this isnt compressing the load...? 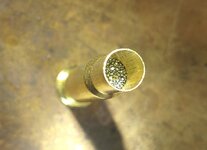 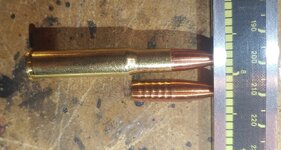 It would certainly appear that way.

DizzyJ said:
It would certainly appear that way.
Click to expand...

So then this leads into some questions, especially if its not good to compress spherical powder.

I havent seen any signs of pressure, I also havent achieved the minimum velocity typical for this cartridge without hitting 37g compressed. Ive zeroed my rifle on this, no signs of pressure. My take is I should be ok but just stop where Im at. Its probably a very light compression.

Koda said:
So then this leads into some questions, especially if its not good to compress spherical powder.

I havent seen any signs of pressure, I also havent achieved the minimum velocity typical for this cartridge without hitting 37g compressed. Ive zeroed my rifle on this, no signs of pressure. My take is I should be ok but just stop where Im at. Its probably a very light compression.
Click to expand...

Without further information that would be my suggestion.

DizzyJ said:
Without further information that would be my suggestion.
Click to expand...

I think its safe where Im at, but I ordered some CFE223 to try. I cant really say for sure, but feel the HLVR is not the right powder for this bullet.

Load development closure.
Today I got an answer. I loaded 4 rounds at 37.1grains. No pressure signs until the 4th shot was a slightly "heavy" lever extraction (no other sign of pressure). I'm glad I didn't try to go for more but changed my mind after confirming earlier this week I was indeed compressing the load.
14rds of 37g ran smoothly, again. I will call it there and hunt with that this year.
Share This Discussion
Link Email Facebook Twitter Reddit Pinterest Share This Discussion