UMATILLA, ORG.A man was attacked by a mule buck deer Thursday near McNary Dam in Oregon.

Oregon State Police say the victim was hiking with his wife when he stopped to take a photograph of the deer. He got too close and the buck gouged his lower legs. He was taken to Shepherds Medical Center.

A Wildlife Biologist says it is mating season for deer, which makes late October and November the worst time to get close.

Kirsch says the area is still safe. Deer won't attack unless they feel threatened. That means stay 30 feet or more away.

"These mule deer are use to seeing people. They are somewhat habituated to people so an aggressive response as apposed to a flight response is going to be more common," says Kirsch.

KNDU is told a hiker has never been attacked near the McNary Dam before.

Now the Oregon State Police and Fish and Wildlife are searching for the buck. Once found, the deer will be euthanized and tested for disease.

"They seem so cute and gentle in the movie Bambi"

What are the odds this couple have an Obama bumper sticker?

I wonder if he got any "action" shots for his photo album?

Hopefully he learned his lesson...
D

I wonder if the guy actually got a pic of the deer for the officials to be able to identify the suspect and have a mugshot.

Yeah, they are pissed off and 'aint gonna take it anymore!!
M

He should have been packing!

he obviously didn't show enough respect for the deer's diversity and was penalized for his intolerance.

Way over there on the left
Bronze Lifetime

How about again but in English. I can't believe he spays that in his mouth..

To protect the public ODFW has now suspended all hunts in the area...

Would you really be surprised if they did that?
C

Several years ago in late October I was fly fishing on the Deschutes around Maupin. That night around 8:00 I was taking a walk outside of the motel where I was staying and didn't notice a herd of deer, one buck and 3-4 does, munching on some apples under a little tree. I stopped and the buck looked up at me and started shaking his antlers and doing the stiff legged walk towards me. I was packing, but I just backed up slowly and he went back to munching apples. Got my blood pumping for a little bit. The buck prolly thought the hippy hiker chick was hot and decided to fight the unarmed animal lover over her. It is mating season after all
P

iusmc2002 said:
The buck prolly thought the hippy hiker chick was hot and decided to fight the unarmed animal lover over her. It is mating season after all
Click to expand...

its funny when people think that wilderness is a playground.it is if your a gun toting ,republican.. lol.just kidding. but seriously the wilderness is full of dangers seen and unseen."lets take a picture of that grizzly bear, how cute" give me a break. i guess we need some more MUTUAL OF OMAHAS WILD KINGDOM, to really get peoples attention and see how the wild REALLY is.

das_napeth said:
I wonder if the guy actually got a pic of the deer for the officials to be able to identify the suspect and have a mugshot.
Click to expand... 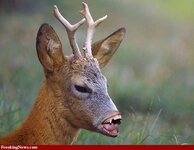 Man Attacked by Black Bear Kills It With an Axe