Venom VCN-1000 nitrous system including an add-on purge kit. Model# is N10-129 which is listed for an Integra. Not sure what else it fits or how universal it is.
-Has 25, 50, 75, and 100hp nozzles.
-The hose is 13' long. 10lb bottle feels pretty empty (light) still has something in it.
-Kit appears to be complete and undamaged with the exception of the missing bottle mounting brackets ($20 on ebay).
I have never run this. The guy I got it from never did either but told me he got it in trade from a friend who did. You can take that for whatever it's worth. I've come to the realization that I'm just never going to get around to this project so it's time to move on.

Priced at $200 because that's about the value of the hard components since I don't know for a fact that the control unit works. If I knew that it worked, the price would be double.
I'd prefer an outright cash sale but might be willing to work a deal in trade. Maybe something in .380, 7.62X39 ammo, a HD 12ga, generator, quality tools or shop equipment. Can't hurt to ask. 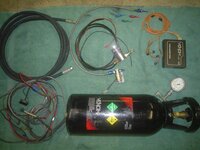 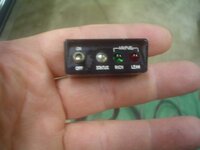