It's not much of a project really, but it might encourage some folks to give it a try.

I bought a Stevens 511 12ga. SxS from a member here last week with the intention of cutting it down.
So I did and here's how.

Removed the wood from the shotgun then measured very carefully and cut the barrel down to 18.25" just for the fudge factor.
I used a cutoff saw with a mineral blade. It got very hot, so I took my time & used lots of WD40 for lubricant.
Anyway it came out nice and square.

Edit in:
I wiped the barrel down well with acetone then heated it in the oven at 170 for half an hour. Cold blue works better for me if the steel is warm. Then took 0000 steel wool and oil and lightly rubbed it down. It blends the blue and generally evens it out.

I stripped the wood bits and reshaped the foregrip. The wood isn't particularly attractive but it's much better. It was painted a semi opaque brown under the varnish. At least now you can see the grain.

I used a rosewood stain for a base then several coats of dark chestnut, then finished it off with four coats of boiled linseed oil, the last two applied with 0000 steel wool then buffed.

Along the way I discovered two cracks in the stock. One just behind the tang and one on the same side close by.
I drilled them out carefully then filled them with JB Weld, my favorite epoxy.
Then let it dry and sanded it to shape.
The original gun pic is the third one down. They got out of order, but they're pretty self explanatory. 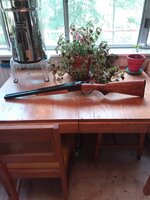 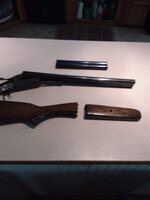 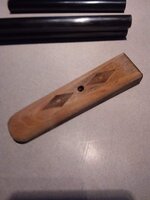 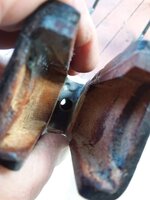 Thank you. It came out pretty good. I'm going to have to edit in the cold blue part. I just plain forgot.

Awesome work. Thanks for posting the pics.

Always fun to work on a gun and do things to make it yours...
Nice work.
Andy

Nice job, and glad to see this. I've got a 311 that I picked up awhile ago with the intention of doing exactly the same thing, maybe this will inspire me to move it up on the priority list . One question, is the barrel rib hollow, and if so, how did you fill it, or did you? Thanks!

very nice work! also thanks for the tip on the cold blue and heating the metal

Pricing and thoughts on buying a project revolver with issues to practice on?