Hi, I am looking to participate in adaptive sports. One of the events that disabled sports and adaptive sports host is Shooting. I am new to these programs and over the past year I have been trying to find adaptive programs that are local and affordable. Unfortunately, most are not around or cost efficient since I live on SSDI. In any case, going down the list of paralympic sports, I came across shooting and now looking for ranges in or near Tigard - or at least by bus. If I were able to compete, I would probably be a #3 classified seated athlete. Which means I am in a wheelchair, with limited mobility and sever range of motion issues. With that being said, I would like to know if anyone there has worked with someone that has a disability. Briefly, I can tell you that I can not raise my shoulders too high, my elbows do not straighten and my fingers are curled. Although, with my off hand I can probably raise my other arm to a certain height. I give you that information in case someone would like to know. Look forward to a reply or hearing from you guys.
Read More

You sounds a lot like a friend of mine who had a C3, 4, and 5 fracture.
He has similiar range of motion. He doesn't shoot, but I'm sure you could easily make something so you could pull the trigger with a hook bar attached to a hand strap.
The hard part would be aiming and/or moving the firearm.
You could also rifle sled that holds your rifle and straps it down.

Thank You for continuing to enjoy your activities. I know it helps you and helps inspire others.

Let us know what you come up with and what your progess is with the sport.

I would suggest that you contact Tri County Gun Club which is located just west of Tualatin. Excellent gun club and I'm sure there are disabled shooters there plus people that are able to train and assist you. Firearms are a very enjoyable activity and I personally would like to welcome you to the shooting sports. I used to live in Newberg, now I'm just north of Eugene so not much good to you down here but if the response is slow don't quit, keep bangin on the door cus I think you'll find the shooting sports a great time. Good luck E Moore.

Clearconscience, your profile pic looks similar to my scooter. Aiming may be the only part I have difficult with. My fingers are curled, but fairly strong. I get pretty adaptive and creative, so I could figure something for moving and aiming.

41Slinger, I looked up Tri County Gun Club and the site is familiar. I can't remember our communication, but I will reach out to them again.

Thanks you guys for the information and support.

Best of luck to you, Mr Moore, I hope Tri-County can help!

I don't have anything to offer. I just wanted to say good luck with your training.
With perseverance you're capable of great things.

In this video there is a look at some equipment towards the middle part. I didn't listen to the interview, as I was more interested in equipment and techniques. What I did see is that the gentleman is wheelchair bound, but also has some lack of use of his hands.

That video is helpful. His examples is exactly the way I pictured shooting. Can't wait to get out there after I figure out the cost of everything. Thanks for that link, bbbass
O 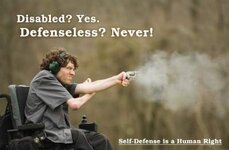 Good on you! Where there's a will, there's a way. In my life, there's only one rule: Never Give Up!

You are most welcome. Enjoy your new hobby!!!

I was finally able to get out and shoot in Newberg and it was great, had a blast. Now I have a couple goals in mind to keep this activity going and continue learning. So, I use a bus for disabled and its within the tri met limit. Part of Sherwood, Clackamas, all of Portland, and down to Forest Grove. Pretty much where the tri met buses and max run. I live in Tigard, so I would like to find the nearest one where I can shoot rifle and pistol. Second, where is a good place to buy accessories locally ( I TRY to help local business if I can afford to). I would need a stand, because I couldn't hold the rifle up due to severe limitation and lack of strength. This feels like a good sport. Its all about accessibility. Oh, and I can't turn my wrist or straighten my fingers, so a manufacturer or store with many stock options would be helpful if you know of any. Hope to see you guys out shooting one day. T


Also look thru the supporting vendors here on NWFA

Cool, Ill look into that. Pretty close. Thanks.

Keep up the good work, E Moore! You will get there! SRG

I feel like. Pretty upset I didn't look into these sports when I was able bodied

I was finally able to get out and shoot in Newberg and it was great, had a blast. Now I have a couple goals in mind to keep this activity going and continue learning. So, I use a bus for disabled and its within the tri met limit. Part of Sherwood, Clackamas, all of Portland, and down to Forest Grove. Pretty much where the tri met buses and max run. I live in Tigard, so I would like to find the nearest one where I can shoot rifle and pistol. Second, where is a good place to buy accessories locally ( I TRY to help local business if I can afford to). I would need a stand, because I couldn't hold the rifle up due to severe limitation and lack of strength. This feels like a good sport. Its all about accessibility. Oh, and I can't turn my wrist or straighten my fingers, so a manufacturer or store with many stock options would be helpful if you know of any. Hope to see you guys out shooting one day. T

Glad you had a wonderful time! Was it the Newberg Rifle and Pistol Club? We used to have an RO that was in a wheelchair so it's pretty accessible. Did you ever get a hold of Tricounty?
NWA is a great place and there is a new gun store called Rifle Works in downtown Tigard. Stopped by there earlier this week, very nice people.

It was Newberg Rifle & Pistol Club, very accessible. The table they swing around at the 50 yrd mark was perfect. I called a few clubs, Tricounty I am sure was one of them and they said something about a waiting list. However, I will try again tomorrow morning. Next couple of weeks I should look into Rifle Works and NWA

I had polio as a kid so I'm unable to raise my arms & have a few other difficulties. I bought a Prairie Dog Shooting Stand (look about halfway down the page) about three years ago & have re-engineered it because I can't NOT change things. It's a disease called "Modificitus" which basically means I have to modify everything I own. The stand is large & sturdy but I bought a used camera tripod at a garage sale, made an aluminum plate that screws onto the top and can rest my hands on it when I shoot pistols. I also have a Vortex V shaped barrel rest and it's threaded 1/4" x 20 which matches a camera tripod. Although the V has been discontinued I've seen them and similar things on various web sites.

Some of you may know Darrel Von in Carlton. He's been a paraplegic since he flipped his motorcycle at 17 y.o. & he's now 63. Search 'Darrel Von' on FaceBook to see the types of things he does and what he's accomplished. He's a guy who doesn't let ANYTHING get in his way and I met him online in 2009. I lived in CT and we were on the same Polaris forum but I moved back to OR in late '12 (moved away for work in '81) and got to meet him in person. He has two ranges; one on his 150+ acres that goes to (I think) 1300 yds and another 50 acre parcel about a mile away. He created the second range because of a family squabble but he encourages anyone with a disability to come use his adapted side by sides & shoot for free. I met a guy from Seattle online & he brought out a full-auto Ma Deuce .50 cal & some other assorted toys. He can't have them in WA so he stores them on OR. That was a fun day!

Darrel won't take a dime from anyone so when I go, which I haven't done in a while I bring a box of clay pigeons for targets. I'm going to be there on July 31st along with my son and we haven't gone shooting together in at least 20 years. Hopefully I'll have my Tax Stamp by then & can bring my 8.5" AR-15 SBR.

Mr. Moore - I'm pretty sure we can work out some sort of method to get you out to Darrel's. If you use a manual chair & can transfer into a car then it's a piece of cake because I have a Ford Flex with a scooter lift in the back. With the seats down it'll hold an "arsenal" so there won't be a shortage of toys to play with.

Regarding hearing protection - In March of 2014 I had a pair of custom molded plugs made by a guy named Kevin Shaw & he charged $55. I went to his house, somewhere near 110th & Burnside (?) and they've been a great investment. The polio affected my balance so when I wear the plugs they're so tight it affects my eustachian tubes and I have to be even more careful that I don't step wrong, etc.

Hey, that's sounds cool with me. How often do you travel own there or maybe I can inbox him through facebook to go another day. During the summer, I usually go to California and the last weekend of July I will be attending a Scleroderma conference.

My mobility scooter folds and can be broke down to pieces if needed. I use it because I was able to rest my elbow on the arm rest and I can stand just not for long, but can transfer easily into a car or truck.

I just went through a few months of posts on Darrel's page, and I can see he is all about helping. That's pretty cool of him.