For anyone who has owned one of these, what are your thoughts? Good/bad/in general. The online reviews are pretty good. Seems like a pretty good value for the price.
Read More

Not horrible. I really liked mine. Was very reliable and accurate. The best festure is the frame mounted safety (and in some models decocker)

I ended up going the 92FS route and like it much more. It felt a little more solid than the PT92.

My wife and I love ours. Super smooth trigger and action. Even with it in my wife's smaller hands, she has no problems shooting it. She is very comfortable (and accurate) with it.

Even though I've already got one, I am always on the look out for another decent priced one. I'd have no problem having 2 or 3 of them (in various locations ).

BTW, we have put numerous flavors of 9mm through it and have absolutely no problems with it. Not one FTE or FTF.

It was the first gun my wife commandeered from me. She was attracted to it because of the polished aluminum/stainless look but soon loved the way it fit her hand. I really like it as well with the previously mention frame mounted safety/decocker. It has been a great gun in the 12-15 years I've had it. No issues to speak of that weren't ammo related. I think you will generally find this is one of the highest rated Taurus guns out there. The 1911's are great as well. My only slight complaint is that the mag catch is slightly different (bigger) than the beretta and they mags aren't quite interchangeable.

Taurus bought the plant and kept making the guns, how is that an imitation? I've had two and they both work just fine.

Thanks all. Yeah, I'm trying to figure out if there truly is a quality difference or if the Beretta name alone warrants the extra $200.

I do prefer the frame mounted safety.
M

The only one I have shot handled like my 92FS, they are less money than the Beretta and seem to be good shooters. Well they last as long as a Beretta, offer the same reliability and accuracy? You can find good buys on 92fs's and 92g's, that's what I did. I got this used for $300, lot of surface wear but fired very little. 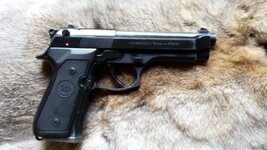 I have had a PT92C for years. It was my first CC weapon. I found it accurate, comfortable to shoot with acceptable trigger action. I moved to a Glock 22 after a friend of mine was shot by his roommate 8 times, one round went thru his arm into his torso = 9 holes. He walked next door and had the neighbors call 911 for him. Meanwhile his roommate reloaded and shot himself in the head,,,DOA.
O

edslhead said:
Taurus bought the plant and kept making the guns, how is that an imitation? I've had two and they both work just fine.
Click to expand...

but a buddy has one he loves.....I haven't owned either one, most people seem to like them

I would look for an OLD PT92, without the decocker. Why? Because it will be inexpensive, and will not be worn out! I don't know what the quality control is like now, but with the early ones it was impeccable! I had one of the early versions with an aluminum alloy frame and a blue steel slide. GREAT! I will always regret having to sell it. It NEVER failed to fire or function, and was more accurate than I was capable of. I added Pachmeyer rubber finger-groove wrap-around grips and the thing would just suck itself into my hand. The frame mounted safety is superior, even with a double action gun, but it does allow single action carry if you are in a hot zone. The Berretta does have a chrome-lined barrel, but only warriors who can't clean their pistols need that. Those who bad-mouth the Taurus PT92 have never used one much!

I have an older PT92. It works perfectly as designed. People talk bad about Taurus pistols. Mine has been very dependable. I don't carry it around. It is to big and heavy but it is nice for shooting. It's accurate with minimal recoil.

I personally like the PT92's better than the Beretta 92's and I've owned three variants of the Beretta and two of the PT92's.I don't think really think there is good reason(especially after owning and shooting both),that someone would choose the Beretta over the Taurus unless you are a brand snob or prefer the slide mounted safety.(yuck)

I like that with a PT92 you can carry cocked and locked and flick the safety off real quick during the draw like with a 1911,I think it was a huge mistake for Beretta to get rid of the frame mounted safety.
Having owned both I did not notice any difference in accuracy or reliability.The only real con to the Taurus version is that the new ones come with a rail,if you don't want a railed PT92 you have to buy a used one,the rail can be a hindrance if you plan on making it an EDC.

Rykdean said:
For anyone who has owned one of these, what are your thoughts? Good/bad/in general. The online reviews are pretty good. Seems like a pretty good value for the price.
Click to expand...

I have had a PT92C (compact) for years, good accuracy, no problems.

The PT908 is also something to consider.

It did not seem like there was a good way to put night sights on the one I had. Other than that it was a nice pistol if you liked 9mm.

In the sticks, Willamette Valley

Bought a new stainless with decocker 15 years ago and a blued used without decocker 5 years ago. Both shoot fine. Use MecGar mags with no issues. Only thing is the locking block will break after extensive use, have done in 5 or 6.
Taurus used to warranty them as exchange parts. but now they want the pistol returned for warrenty. Costs more for shipping than the price of the replacement. Have long since had spare block so as not have the gun down.

I had a PT92af, never had an issue with it. I got it because it was cheaper than the Beretta I had to qualify with. with a few minor differences, it is basically the same gun. The only reason I got rid of it, needed to consolidate and downsize for economic reasons.

Taurus makes good copies of things. The PT92 is one of the few Taurus (taurii?) that I would be OK with owning.

aksu747 said:
...I don't think really think there is good reason(especially after owning and shooting both),that someone would choose the Beretta over the Taurus unless you are a brand snob or prefer the slide mounted safety.(yuck)
Click to expand...