Something to be aware of if you have older stock AP uppers.

I had planned on doing a partial tear down and rebuild to swap out a gas block, change a FF handguard and strip the flip up sights and red dot to mount a scope. All well and good, but as an afterthough I figured, why not upgrade to a billet aluminum dust cover. Purely one of those... an opportunity came up to snag a couple of them (the same).. now what should I do with them situations.

The rifle is built on an M4E1 upper, which, of course, doesn't allow you to pull a dust cover rod without removing the barrel nut. Great..... That hadn't occured to me before I got started. I wasn't really excited about that, but what the heck, right?

Pull the nut and what do you know? The billet aluminum cover hangs up when rotating from open to closed and won't latch.

So here's all I can figure. The orginal M4E1 and the AP standard are fairly older stock (maybe 5yrs-ish(?)) and the other M4E1 and RTB are new purchases in 2022. It would "appear" that the older AP's are ever so slightly different spec that won't accomodate the thicker billet type cover designs, or.... at least the Timber Creek billet covers, anyway.

I could be wrong, but it sure seems that way and thought it worth mentioning.

I know that feeling. When you go through all the work only to find out it’s not going to work together.

On the bright side, at least it wasn’t a part that you needed to test fire it to confirm function. Those are the worst of days.

Reno said:
On the bright side, at least it wasn’t a part that you needed to test fire it to confirm function. Those are the worst of days.
Click to expand...

Very true~ That would truly suck! I really don't like pulling and reseating a barrel nut, but you're right. I got off easy.. all things considered.

Yarome said:
Very true~ That would truly suck! I really don't like pulling and reseating a barrel nut, but you're right. I got off easy.. all things considered.
Click to expand...

All things considered, any day working on a gun is a good day. Even the days things don’t go as planned.

Hell, one time I offered to help a member here put on a free float rail on a piston gun with plain ole plastic hand guards. He brought it over, I took off the gas system. Removed barrel nut and installed the new barrel nut. Installed the gas block backwards upon finishing. Yep backwards. Wasn’t paying attention talking to the guy about stuff. Killed 3-4 punches and a way too much time trying to get the gas block off as the tapers where now backwards. At the end it turned out to be a two piece rail, clamping style, and the gas block didn’t even need to come off. Meaning I spent all that effort for literally nothing.

try these no disassembly required!!!

Hell of a premium for this, but I might need this. Reno said:
Hell of a premium for this, but I might need this.

AP isn't all its cracked up to be. Here my upper from them. The one reference point was out of spec. And I know this item was out if spec too. Barrel is fully seated and torqued and yes the pin is properly clocked (if you can't tell) and the barrel is a BA barrel (AP partner co.) The feed ramps were barely there. You see where I had already fixed the one and the other I just started to dremel it out to correct it. 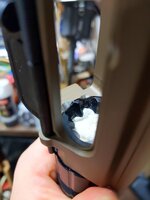 Can we get a clean, locked thread with a link to the hearing tomorrow?