Here comes the latest attempt to impose a so-called "assault weapon" ban. Senator Frank Lautenberg, along with his willing accomplices in the Brady Campaign (AKA: Handgun Control), has released a "study" entitled "Firearms, Explosives and terrorists: A Looming Threat: A Major U.S. Vulnerability."

The recent Heller and McDonald Supreme Court rulings, confirmed our Second Amendment rights, but because of the necessary narrow focus, left the door open for restrictions on our rights. We knew this fight was coming and here it is.

The NRA, SAF, GOA, JPFO, etc needs your help. If not already a member of one or more of the gun rights groups, please join. We need your help. These law suits to protect our rights are expensive.

By the way, if Harry Reid looses his Senate seat on Tuesday, and IF the Democrats keep the Senate majority, Frank Lautenberg will be the Senate Majority Leader, able to call the shots in regards to legislation.

Follow this link to the Brady Campaign web page, which has a link to the Senators report. 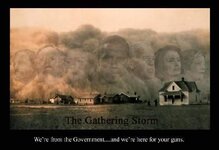 Eh, Brady campaign blowing hot air out their bum as usual. They are always going on about all those EVIL semi automatic assault weapons. (Which of course isn't even a real word. And if they said semi-automatic assault rifle it would be an oxymoron since being select fire is part of the definition of assault rifle. Not that real assault rifles should be regulated in any way in the first place...) Seems doubtful that anyone's going to come to steal all your guns.

Besides, anyone with half a brain cell will see that clearly the way to defending the country against random terror attacks with assault rifles is to arm every citizen with assault rifles. Severely restricting guns sure worked out well for those OTHER countries that were attacked, right? It's not like international terrorist organizations would find weapons sources other than typical US gun stores or anything.

Definitely do join NRA and GOA though, even if you don't agree with everything they do it is good to have everyone grouped together to push pro-gun legislation.
G

sometimes I think these anti-gun groups are actually funded by the gun manufacturers. They know nothing would ever come of all this talk, but it sure does motivate people to buy more guns....

Since I really got into guns in the early 80s,I have never seen anything that has done more for the firearm industry than the election of Obama/Biden.
Nothing.
K

I didn't see where there was a proposal for an "assault weapons" ban as the OP states. A report was written by Senator Lautenberg's office providing support for legislation that would add being a terrorist or suspected terrorist to the list of reason's you cannot legally own a firearm and also require a background check on all transactions at gun shows. ( I have bought firearms at gun shows and always had to pass a background check so I assume the loophole they are referring to is the folks that walk around with the flag sticking out of their barrels trying to sell their guns.) I have no problem with denying a terrorist the right to purchase or own a gun, bottom line. I think there can be a discussion though on how we determine what a "terrorist" or "suspected terrorist" is. At this time it appears the F.B.I. terrorist watch list is probably the best way to identify these folks. I do have some concerns about innocent people being put on this list and denied their right to own a firearm which would be a terrible injustice. But until someone comes up with a better identifier than that I would have no problem with that legislation. In regards to the gun show "loophole" it was my understanding that this was already addressed with current laws but maybe I'm mistaken. That's just my two cents and I'm sure most disagree but oh well.

Also, by making fun of liberals who call any semi-automatic firearm an "assault weapon" is not going to help your cause, it just further entrenches the two sides. We've had nearly a decade now of television coverage showing our soldiers and marines in battle. When people then see these same rifles at the local outdoor store you are never going to convince them otherwise.
C

People being mistakenly put on a terrorist or no fly watch lists is a HUGE problem. For instance, my son was in the WSU marching band. He has a "John Q Smith" type of name. When they were flying to California one time for a bowl game, (Yes, it is true. WSU was actually in a bowl game.

), he and the entire group he was flying with were delayed while they had to do a background check on him. I am not saying that we shouldn't be concerned about security on our flights. It is just that if you get put on one of theses lists they won't tell you why you were put on there and it takes a lot of time and determination to get off of it. He had to write several letters to DHS and TSA to eventually get his name taken off. Whenever he travels by air now he takes a copy of the letter from DHS with him just in case.

I guess my point is that this law would make it very easy for someone to get listed as a "suspected" terrorist who was no threat at all and consequently have their rights denied.
K

Cougfan2 said:
I guess my point is that this law would make it very easy for someone to get listed as a "suspected" terrorist who was no threat at all and consequently have their rights denied.
Click to expand...

A second look at the Pressure Cooker Threat