This is going to be a long story so please bear with me here and please pay attention to the details. I am selling items that I never use and do not see myself using in the future so I am trying to do some downsizing.

Back in the early 2000's I found the joy of silencers and found out about the 300 Whisper and decided I needed one. Only a couple short years later the 300BO became a thing. The 300 Whisper and BO are interchangeable.

Barrels were hard to come by so I decided to have one custom built by Lilja in MT. I paid roughly $700 for it. The barrel is 16" SS with a 1/8 twist, fluting and 5/8x24 barrel threading. My only use for this rifle is with Sub Sonic ammo. I worked up some loads with 240gr SMK's that fed well. In a search for a less expensive bullet that sill stayed SS I ended up with some Hornady 220gr bullets. Here is where the bad comes in, they did not feed well. In an attempt to improve feeding I followed the M4 cuts on my receiver and opened up the lower lugs of the barrel extension. This did allow the Hornady to feed and I put about 200rds though it with those bullets.

The brass is mixed head stamp, mostly LC though and now once (loaded ammo and primed cases) or twice fired (assuming once fired LC brass was used, I bought it already converted). The ammo is being sold as components and you should verify if you chose to use it. I will provide the buyer with the load data. I can pull the bullets and dump the powder if you chose prior to shipping.

I am trying to find reasonable pricing but it is all over the board. At this time I am not really interested in separating.

$600 shipped OBO. If my price is way out of line please PM me so I can make adjustments or hang onto this. 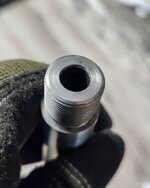 Yesterday at 3:57 AM
Tomato seed