My understanding is that these were police used guns in germany. It comes with a sig sauer box, police holster, 3 mag pouches, and 5 mags. It also comes with a really nice new right hand leather holster ( I believe desantis). Also included is a complete replacement spring package (hammer spring included) and roll pins I think this package was around $26. This is a good shooter. This handgun is very comfortable, and shoots very well. The rifleing is very good, probably not shot much. The blueing in the slide is worn from holster wear. 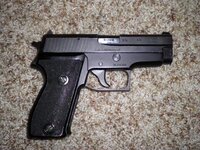 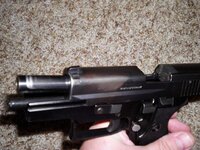 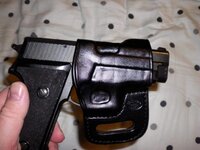 What is the new price ?
N

I'm no expert on sig handguns by any means, but I believe that it is "dot the i" sight. I had plans to remove the sights, have the gun refinished and put on night sights, but I have too many projects, and am working on some hunting rifles now. I have found this handgun to be very accurate, however after decocking, the first pull is double action, and it takes a little getting use to. I normally shoot a striker fired handgun. I also had plans to put in a new spring kit, the ones I found online are about $20 ( I think) I've read this will help with trigger pull and reset. I have held the p226 ( which I think was what the p6 became) and also a p220. They felt about the same to me. however, the p6 has a single stack mag.

hopefully someone here can answer better than me, since this is the only sig I've owned.

Not really looking for any trades at the moment.
N

I wish you were in WA
N