This is going to take more than one post, so please bear with me. If you read the initial post, please come back and read about this unique man.

As I mentioned in the other thread ARGONAUT!!!, I spent this Saturday outside of Weiser, ID, at the ranch that belonged to David and his wife Karen. I didn't know it at the time, but the family had a Celebration of Life in Byron, CA (east of SF/Oakland Bay) on February 17, 2019 a month prior. I guess there was just soooo much to celebrate, and they still have a lot of family in that area.

There were about 30 people at the ranch for his memorial. We arrived between 1pm and 2pm. I have only met some of the close family, so I didn't mingle much. But I enjoyed talking with them, having some good food, and petting the friendly dogs.

The family had just returned from a ceremony at the Weiser American Legion where Karen was presented with a U.S. flag and thanked for David's service. The Celebration of Life began at 2pm, and was very informal. It was led by a shooting friend of David's that had known him for about 4yrs. He read a cowboy poem that he had adapted from Amazing Grace, even tho David was not a cowboy. Ted said David could have been one if he had wanted to. Many funny stories were told about David's tendency to take on impossible projects. After the service, stories continued person to person. 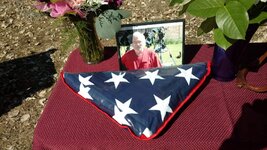 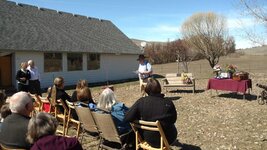 ​
David's step-daughter, Emily, built this bench for her mom (with plaque), Karen, to put up on the hill behind the ranch house. David had finally been able to purchase the 80acres he had been seeking for so long. Now his ashes will rest there, with a view, where he and Karen can commune and contemplate. A LIFE WELL LIVED - CELEBRATION OF A REMARKABLE LIFE 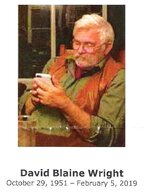 His early years were spent in northern Idaho. His extended family were pioneers in the Lewiston - Grangeville - Winchester area where his paternal grandmother taught him the love of fishing. At age 6 his family moved to Spokane, WA where he would graduate from Lewis and Clark High School. Even before graduation, David's dynamic personality benefited the Boy Scouts where he taught at scout camp for 5 summers. Prior to entering the military, he attended college and earned a degree in photography.

David served our Country for 13 years in the US Air Force as a Pararescueman or PJ. During his four years in Germany, he eagerly expored all corners of the continent. He also served covertly at times around the world. He "cleaned up the mess" in Jonestown, rescued people off the MGM Grand in Las Vegas, and was part of the team that attempted to rescue the hostages during the Iran crisis.

While still in the AF at age 28, he developed Type 1 diabetes, ultimately changing his life path. He spent the remainder of his life avoiding the 9-5 grind. He was independent and creative and loved rescuing anything from old Porsches to horse drawn carriages to military equipment with the hope of bringing them back to life. If it wasn't rusted or missing a piece, he wasn't interested.

His "tales" were bigger than life. He went out of his way to meet anyone he deemed impressive from our newly elected governor to Richard the Giant (actor Richard Kiel). But he didn't "suffer fools" or "toxic" people. Even up till Tuesday morning, he was planning his next adventure, his next enterprise, his next scheme to live large. And he lived with the hope that one day his world class cardiologist would find a cure to his diabetic induced heart disease.

Topics David mastered were cars, history, genealogy, mechanics, boats, airplanes, horses, dogs, politics, guns, knives, old westerns, old actors, geography, gravel, unique dining, hunting, fishing, wildlife, etc. He read something once and it was committed to memory. There were things he didn't do - like dance. As he said once when coaxed out on the dance floor (from Quigley Down Under): "Said I didn't have much use for 'em, never said I didn't know how to use 'em. 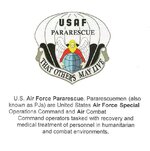 Vaya con Dios, brother. We are ALL Diminished.

Thank you @bbbass for bringing this to our attention and sharing his life.

Thank you @bbbass for bringing this to our attention and sharing his life.
Click to expand...


You're very welcome. It was a task of love for a brother. I wish I was able to share even more, but I think most of us experienced the man as he was in life... bigger than life.

Something I'll add... Emily related how David never got angry... oh, he would get mad, but not really angry. And how he had a way of taking your side of the argument and going with it until you were agreeing with what he said in the first place. That was something I did notice about Argonaut... you could not win an argument... he was tenacious!

He loved everything European. Especially German guns and glass. All those safari hunts. And I guess his appreciation of glass came from his degree in photography.

I bought a card, signed it from all of us at NWFA, and gave it to Karen. She was very appreciative of all the kind thoughts!

We had worked out that we were kin, my maternal grandfather was named Robert Orville Wright. Seeing (for the first time) his photo I see the family resemblance! DANG!!

I’m not at all surprised by the documented mechanical aptitude stated above, as it runs strong in the males (I’m no exception either) of the “Wright clan”.... you know, the ones who brought you powered manned flight? LOL

Every Wright male I’ve ever known has had the innate ability to observe just about any mechanism and “intuit through it”, or just start building wicked projects in great detail just from a mental image they come up with. My employers oftentimes call me “the machine whisperer”, and “Jedi Master” because of the things I’ve pulled off.

Thanx BBBass, I wasn't aware that he had passed...

Having NWFA be sort of a place away from home. I’ve gotten to know many in person, and even more via their online personality. Even those I may not see eye to eye with, I still look at you all as damn good people that I’m happy to hang out with in our little virtual realm.

It cuts deeper when an old thread comes up where they posted or even a thread they started.

I’ll miss having you around NWFA.

Stomper said:
Every Wright male I’ve ever known has had the innate ability to observe just about any mechanism and “intuit through it”, or just start building wicked projects in great detail just from a mental image they come up with. My employers oftentimes call me “the machine whisperer”, and “Jedi Master” because of the things I’ve pulled off.

Offtopic: I know who I'm calling first if DARPA ever grants my request for a B-52 or B-1 as a "research testbed"...

Thanks @bbbass, glad you could make it out to Weiser. RIP @Argonaut

Though there were times we saw opposite sides of a subject I wish him and his family peace. He is onto the next big adventure. Good bye Argonaut. Sleep well good sir.

I was under the assumption that we were gonna get some kind of "something" for our peeps that are no longer with us? Is that NOT the case? Theres members here that I think should be recognized....just sayn......

I've haven't been on here much at all the last month and a half and missed the original thread. Sorry to hear of his passing! I didn't know him but always enjoyed reading his posts.
RIP

Rest in peace my friend!

Glad his ashes are where he wanted them. RIP Argonaut.

Thanks for representing us, @bbbass. Crossing over on a 55m boat would have been a hoot.

P7id10T said:
Glad his ashes are where he wanted them. RIP Argonaut.

Thanks for representing us, @bbbass. Crossing over on a 55m boat would have been a hoot.
Click to expand...

Anyone heard from Argonaut lately?
2