Located in Pendleton, OR. I will be in PDX this weekend but won't bring it with me unless someone wants it.

16" barrel with less than 500 rounds through it. This rifle shoots commercial ammunition flawlessly and it shoots German MEN surplus(all I've tried). I've installed a POF G3 butt stock to replace the lighter PTR made unit, but otherwise it's all stock. Includes 40 military mags of various European makes. Also has an HK91 Port polymer port buffer installed that prevents the brass dings. Brass fired from this rifle is reloadable because of the port buffer. Rifle includes box, manual, 3 rails that bolt onto the aluminum handguard, 40 aluminum mags, NEW HK firing pin, and NEW in package HK G3 locking piece. 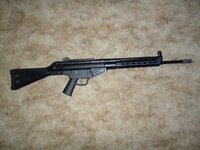 The HK33 wide handguard and bipod shown, not included. 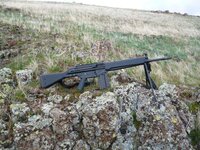 Looking for $1000 cash. No trades. Buyer has the option to purchase a NEW German G3 Navy lower with trigger pack for $80 and an HK33 handguard with bipod for $200. HK33 handguard was clearanced around the front to fit the heavier PTR barrel.