A few weeks back a buddy traded my an Armi San Marco 1848 Pocket (sometimes called a 'Baby Dragoon) .31 for a pair of custom grips. Being me I decided to convert it to fire cartridges. I'd already redone one in .22LR and another in .251 TCR, so I thought I'd do this one in .32 S&W. These guns are small- here's a pic of the gun as I got it, with a .45 ACP cartridge for comparison.

First off I slugged the bore at .315; a bit big for .32 S&W (normally .311-.312) but I figured sot lead bullets would 'bump up' to caliber easily enough. I actually had an extra 5-shot cylinder that fit and worked, so I used that instead of the one that came with the gun; good to have a back-up. I pulled the nipples, turned down the back of the cylinder, then carefully bored through the chambers. I used a modified, slightly undersized drill bit to ream the chambers, then =finished them to size with sanding drums. I made a breech-plate with a loading port, and bored it for the fixed firing pin I mounted in the hammer-face. Once that was working properly I re-contoured the under-barrel lug, then stripped and rust-blued the gun. I'd hoped to leave the color case-hardening, but while I was cutting the loading port in the blast-shield a tool slipped and marked up the side of the frame. I also reshaped the back of the trigger guard a bit, as it was uncomfortable with my rather large hand. The end result came out pretty good. I left the barrel stock length- 5-3/4". I did refinish the original grips.

Naturally with the local shooting ranges closed I couldn't test fire it with standard ammo, so I came up with some low-powered 'gallery' loads.' I swaged some 65gr wadcutters out of soft lead, and loaded them over 1.2gr of Red Dot with a Federal #100 primer. They have just enough power to firmly sink themselves into a 2x4, and proved quite accurate at 5 yards, that being about the maximum distance I can shoot in my workshop. They're pretty quiet, too. I ran them over the chronograph and got these results:

Just about perfect for indoor target shooting. Here's the 2x4 I tested them on- So, fun little range toy. With some proper loads I might take it out for small game.

Just the thing when attacked by Lumber Zombies.
Great build. Thanks for taking us along for the ride.

will you try a black powder load ?

homeuser6 said:
will you try a black powder load ?
Click to expand...


Yes. Well, Triple-7; actual black powder is kind of a PITA to get locally.

My only question is, what do you do for an extractor?

My only question is, what do you do for an extractor?
Click to expand...

Do it Man With No Name style... replace the cylinder. My only question is, what do you do for an extractor?
Click to expand...

These are the best I have- I you need me to I can take some better ones tomorrow. 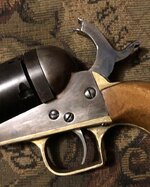 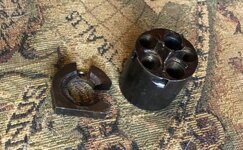 that's ok, i see what you did. is this your own idea or based on a known conversion ? looks pretty creative to me.

homeuser6 said:
that's ok, i see what you did. is this your own idea or based on a known conversion ? looks pretty creative to me.
Click to expand...


I'm pretty sure it's similar to the conversions folks used to sell a few years back. I've done a fair number of conversions in the past, so this was just more of the same, scaled down.

did you post any of these previous conversions ? if not, can you ? (i have to duckduckgo this now)

A great book on Colt black powder revolvers and their conversion to cartridges is
A Study of Colt Conversions and Other Percussion Revolvers
By R.Bruce McDowell
It has large clear photos of the revolvers and excellent text to explain , just what is what.
Andy

homeuser6 said:
did you post any of these previous conversions ? if not, can you ? (i have to duckduckgo this now)
Click to expand...

I can't recall if I posted them here. I'll post some more later.

Just added the scope to my AR10

Wednesday at 8:13 AM
3MTA3
H
Dillon Square Deal B with Five Caliber Conversions