I'll start out by saying I'm up in the air about what I'm looking for. Make an offer, and I'll think about it! I'll also note that these are old, inherited revolvers, only one of which is functional at the moment. Please read everything about any before making an offer. Ask any questions you want and I'll answer to the best of my ability!

DEFENDER is SOLD
Iver Johnson Defender '89, 7 shot .22 Short. Based on my research, manufactured between 1889 and 1895. This revolver is NOT functional at the moment. The frame, cylinder, trigger, hammer, and cylinder pin are all there, however there is a part missing inside that makes it non functional. The cylinder pin release seems to be missing as well. 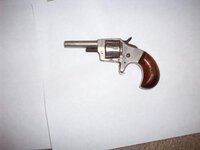 S&W is SOLD
S&W 3" Hammerless Nickel New Safety "Departure" in .32. Manufacture dates are 1880 to 1919, though I believe this one is on the earlier side of the range. It comes with the original box and brush. The bad news: It seems to be seized up, the grip safety, trigger, and cylinder don't move, and it doesn't break open either. I believe it was functional at one point, but time has made it seize. I think that if someone had something they could soak it in, they could clean it up again, but I make not promises. Lastly, H&R Double Action Model 04.32.6 shot, 32 S&W. The model puts it as a 1904, but beyond that I don't know much about it. It seems to be entirely functional, but I would still have a gunsmith look over it first. 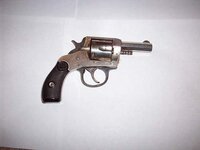 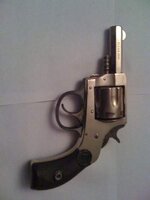 cool old guns, TIP -don't "soak" a nickel plated gun, odds are it will pop the plating from the surface.

My understanding was that only a problem for WTS ads. I'm looking for a cool trade of some sort. I'm interested in a bunch of stuff... a CCW automatic, a home defense shotgun, a henry lever action, some sort of bolt action, etc. I don't know anything specifically.