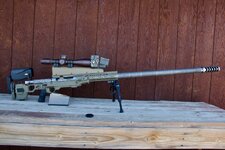 Is this repeatable, or another case of enough monkeys with enough long range rifles?
D

What, no customised .50 BMG? Make mine Ma Deuce!

I'm not as impressed with these types of headlines. After all, duffers can hit a hole in one and gang bangers can take a life of someone with a stray shot from a Glock 19 held sideways a 2000' away. The proof in the pudding is % of follow up shots with equal success. Absent that info, I just yawn and move on

jbett98 said:
68 previous tries. I guess you can lob a bullet a long ways and get a hit eventually.
Click to expand...

bionic knees said:
not a major accomplishment in my view, shooting at something the size of a car if you are persistent enough you will hit it eventually. woopie!
Click to expand...

Yeah I pretty much agree. And if you throw enough money at equipment I don't really think theres a lot of skill involved in the reloading either. Its not like there is some secret sauce they are using a bunch of other people aren't. Its just most folks can't afford $600 primer seaters, $2000 Prometheus scales and so on. Like Erik Cortina said he had his young daughter making his ammo after getting that equipment and its so good he shot a 3 shot string to verify velocity for quals and they all shot literally the exact same speed, the judges thought their equipment broke etc or something was fishy. The fact is. If you have that kinda cheese to spread we are at that point where the average Joe can get that kinda consistency fairly easily if your somewhat paying attention.
There's things that can have a lot more impact if you have the right equipment.

waltermitty said:
I'm not as impressed with these types of headlines. After all, duffers can hit a hole in one and gang bangers can take a life of someone with a stray shot from a Glock 19 held sideways a 2000' away. The proof in the pudding is % of follow up shots with equal success. Absent that info, I just yawn and move on
Click to expand...

Yup.
What would be funny to know is how much $ those 69 shots of 416 cost them to accomplish this mostly odds based shot? Wasn't cheap!

"Fire for Effect" is what I was thinking.

I was going to ignore this thread even if I was interested in the 4.4 mile hit.
That is the equivalent of shooting a parked car in a parking lot in Bellevue from Capitol hill in Seattle Washington.

To me, a record is doing something very, very difficult beyond what anyone else has done in the category. Number of attempt or not. Especially if the nearest attempt was 4 miles.

So the amount they spent, most of which may have been a write off for the shop, doesn't approach the amounts spent by others on their hobby. Anyone race cars or boats, or fly for fun?

And at it was NOT shot from a machine rest. Even though it was a stable position with an incredible heavy gun, the alignment adjustments and trigger pull were still by a person.

And also goes without saying even though true, "please don't feed the troll"

In closing just like rocketry, both are fairly Dependant on weather on somewhat luck. But also. Luck is what you make of it.

This long article describing the incredible lengths to consistently shoot a projectile though the same bullseye target hole at 100 yds. is the exact opposite of what is being discussed with this thread.


Secrets of the Houston Warehouse Secrets of the Houston Warehouse – Lessons In Extreme Rifle Accuracy

Back in 1993, Precision Shooting Magazine printed a landmark article about the findings of a group o...

The World we now live in!