Most recent UPDATE EDIT: Nevermind! I got it! Much easier than I thought and did not require full selector dis/reassembly.

It looks like they simply reassembled the firing pin with the selector in the fire position which locked it up. Pulling the spring allowed repositioning of firing pin and the selector to the half-cock position then reassembling. Problem solved!

I'll leave some of the original in case anyone else runs into this issue.

This is no fun! I had it reblued and it would appear that when they put the bolt back together they assembled the selector in the wrong position(?). It's stuck in the fire position but will not move into half cock or into safe. It goes about half way into half cock, but it's a hard stop there. (And yes. It was no fun removing the firing pin assembly without being able to lock the pin back with the half cock

I figured I would pick the brains of the more learned around here and see what your thoughts are. 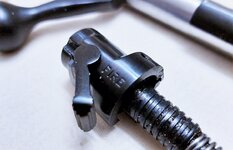 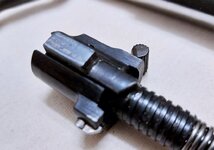 This is that collar. (no typical spring retainer) Someone was asking how to compress the firing pin when it's released like that without marring the cam. I use the boot lace method... if that's of any help to anyone.

They sell a specialty tool, of course, but kind of spendy.

Anyone happen to have specs on the firing pin spring? Uncompressed length?

It looks like I'm getting about 5.7lb's on it. Civilian primers... that should be about right but I admit I have no idea what it "should" be. Anyone?

Loose bolt handle on a Remington 512