What did you do today to prep?

AshWilliams said:
We make awesome pine tar soap. Even sent the recipe to a member here.
Click to expand...

Have you done the lye soap deal….. I just set a bucket of water (rain) aside with hardwood ash. Is it as easy as YouTube says. Can I add good smelly stuff to it?

I took my old Mosin out for some exercise. 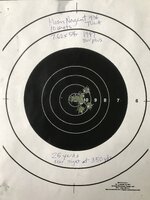 My son took his newest toy out too (Accuracy International in .308 Win). He said the ZQI ammo was shooting like C#@* while the LC ball ammo was doing much better for him.

And, Nope. He's not making a move, to getting back to the reloading bench.

Do not want to wake the neighbors...lol Last night I decided to clip up some Mosin Nagant ammo. Yes, that can on the far right is what the ammo came out of. 440 rounds to the can. Factory code "188" and the Date code (looks like a) "K" or maybe it's "H"?

I transferred the 20-round paper-wrapped packets into the middle can. Yeah.....I didn't want to accidentally cut my hand while reaching in.

Which also meant, that later in the night (after I was done), I had to pound down the sharp edges on the middle can. Yup......I'm keeping that can for more duties around the house while the can on the far right is going into the trash.

The clips are made by Izhevsk and recycled from a can of ammo on clips from 1947. BTW......that 1947 ammo was terrific. Never a problem with it. I guess that says something about properly stored "old ammo".

Me.....I would have started out with a single load and tweaked it a little at a time.

But, I guess that he was in a hurry to find what works for him and his bolt gun. The ammo passed my headspace/gauge test and testing for COAL. YES, I'm thankful for that. And BTW, he said he used 43.3 grn of H4895. Whatever. I'm glad that he (at least) got back to the bench.

Added additional energy bars, batteries, and trekking poles to mine, my wife's, and our daughter's trunk bug out bags.
Last Edited: Jun 15, 2022

AlwaysOnTheGo said:
Added additional energy bars, batteries, and trekking poles to my mine, my wife's, and our daughter's trunk bug out bags.
Click to expand...

Don't forget the tampons with your family gender makeup! They also will make a good bartering product right now!

Agreed! We already have them and plenty of tp in all of our bags.

Changed a tire on the truck today - old tire was sitting so long that it wouldn't hold air anymore (I do have a full set of 6 studded spares too).

May seem like a small thing, but the wheels on a dually are not trivial, and getting the spare off its mounting was even harder - had to resort to a cheater bar on a breaker bar. The pneumatic wrench would not break the nuts loose on the spare or the flat tire.

Yesterday I used the truck to pull some large limbs out of the woods that fell in my ad-hoc range space.

* Took the old non-operational hose cart apart and made wheel sets for 2 kayaks so I can roll them into the water with human power.

* Bought another 25 lb bag of rice and have mylar bags and desiccant on the way. Used the lads Swix snowboard waxing iron to seal the mylar last time -worked great.

* Planted Sunchokes in the area at 4 different locations and Camas at another spot. (this is public places generally, the goal being to have many options for food in the event of need)

Freeze dried about 4qts of corn, 2qts in jars, 2 quarts in a bag (its like eating candy, my wife loves it).

Downloaded Kiwix and I am downloading various ZIM files to read in it, like Wikipedia, PHET, Wikimed, Wikibooks, Wikisource and so on.

Now that I have Starlink this is much much easier and faster.

The Heretic said:
Downloaded Kiwix and I am downloading various ZIM files to read in it, like Wikipedia, PHET, Wikimed, Wikibooks, Wikisource and so on.

Now that I have Starlink this is much much easier and faster.
Click to expand...

Filled up my SSD. Going to offload the files onto a 1TB SSD that fits into my wallet.

I should be able to read the files on any of my devices if I install the right software on them.

50yds with the precision first time shooting 22lr at that range... Bought some more 6.5 for the hunting rifle, bought some ammo cans so my ammo is more organized, and visited the holy land (bi mart) for some more freeze dried meals to supplement my food preps

Taste tested some smoked/peppered herring. I liked this better than the mustard or tomato sauced herrings by far. I think I will try to jerk one of these in a dehydrator and if it turns out well, then put that into a vacuum bag and see how long it keeps.
Share This Discussion
Link Email Facebook Twitter Reddit Pinterest Share This Discussion

Prep for today, fed the dogs.

Dec 22, 2012
knuckle Head
T
Current events, and political winds, what do these factors suggest for prep?
2

Feb 15, 2016
Provincial
B
How do you store your prep supplies at home?