jebediah said:
Winchester model 74 semi-auto .22LR 1939 - 1955
I like the heavy stocks and longer barrels. The one with the vintage 3/4" scope is in mint condition its just to bad someone drilled and tapped the receiver. The other one is a little dinged up 25% blue loss, both rifles are great shooters and quite accurate

I have one of those, its minty

Yeah....we all get old someday.

I hear ya' on this ^^. Though I force myself to do 50 yards, maybe a bit more. I don't see how even the young soldiers of the long past could use those teeny tiny sights out past 100 yards.

Mikej said:
I hear ya' on this ^^. Though I force myself to do 50 yards, maybe a bit more. I don't see how even the young soldiers of the long past could use those teeny tiny sights out past 100 yards.
Click to expand...

When I was younger. Yeah.....way back when.
I shot hi-power (service rifle) with my M1a. We actually shot out to 600 yards with iron sights.

I GUESS I could see that far, back then.

I only started playing with long guns 5 years or so ago. So...
600 yards, boggles the mind.

Mikej said:
I GUESS I could see that far, back then.

I only started playing with long guns 5 years or so ago. So...
600 yards, boggles the mind.
Click to expand... 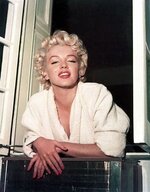 Is this what you boomers ment...

Yeah....we all get old someday.

ya I get that.

sp_saff said:
Still new to milsurps. But here's what I have so far. Thanks to the folks that helped me jump start my collection, and educating me (y'all know who you are).

Love the helmet and gas mask.

I was literally daydreaming today at work about trying to find a pickelhaube and period correct trench warfare gas mask.

I went shooting today and brought along this old fashion R.F.I. (Rifle Factory Ishapore) 2A1 in 7.62 NATO (calling her an SMLE is ok by me too). 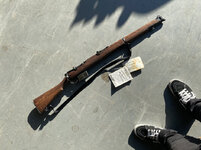 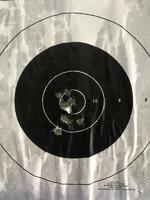 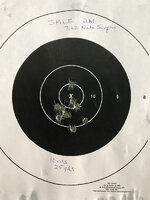 1) The trigger is ok for a military rifle and could certainly could use a work over. But it's not a BIG complaint and it's NOT a Match Rifle. So, who cares?
2) The feeding was sometimes a problem. You don't want to baby it. It's cock on close. Which I am NOT used to. Perhaps, that was the reason leading to/causing my feeding issues?
3) Cock on close also had me pushing the rifle away from me. Thus, I had to readjust things more often. And, it was an even slower process (for me) vs with a Mauser. "Mad Minute"....whatever.
4) Just opening the bolt took a bit of effort. And, it's difficult to slowly slide the bolt open and still get a good reliable ejection. Not....like when using a Mauser.
5) Speaking of the Mauser comparison. Yeah, IMHO the Mauser is better. Working the Mauser action is a joy, compared to this SMLE variant. Slow or fast. IMHO, the Mauser is just much smoother to operate.
6) Then....the bolt knob on the 2A1 would frequently strike my knuckle during recoil. It's a pain.
7) The front sight was small and those darn protective ears. Yeah, they look like a fat front sight. I'd bet, that it could be confusing under stress. Conclusion....
If YOU like the SMLE platform (say even in .303 caliber) well, that's your choice. Good luck with that.

And, Sorry.
But, I had no stripper clips to play with.

And, being that my ammo was "grungy old surplus stuff". Maybe that contributed to the feeding and extracting problems. Not to mention, that .308 NATO ain't the same as .303 British. Yeah....the amount of taper to the cartridge.
Last Edited: Dec 13, 2021

A pair of Cold War era bolt-actions. On top, an Indonesian Model 1954 in .303 British which started life as a Dutch Mannlicher in 6.5x53R but was converted in 1954. On the bottom is just a fairly typical Ishapore 2A1.

Since my guns don't like collecting dust. I took this one out shooting today. Springfield M1 Garand with surplus HXP M2 ball ammo. 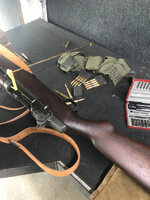 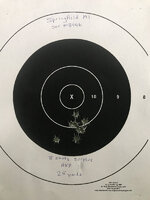 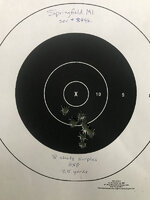 ZigZagZeke said:
Colt 1903 "Pocket" model, type I, in .32 ACP. Made in 1915. With original grips and ivory replacements. Custom made vintage holster. This was Sam Spade's gun of choice in all those Humphrey Bogart movies (e.g. The Maltese Falcon). Original magazines for this go about $200. If you see one at a garage sale, snag it!

Actually made in 1906 according to the serial number. My mother had told me it was 1915.

I completely forgot about this post, but After not being able to any parts, I fired up the Bridgeport mill, made the side plate and grip for it and fired it using 44 special brass and a black powder load, it was FUN!

This is a 1946 FMAP licensed colt 1911a1. I picked it up last summer at Castle Guard in Centralia; nice shop worth noting. A good shooter. 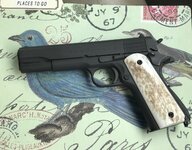 1969-dated Chinese Type 56 SKS-clone. This was imported from a stockpile in Albania, apparently. Lovingly de-cosmolined by yours truly. 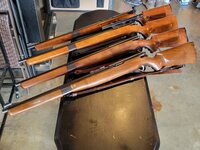