We Arm The Saudis So They Can Arm Islamists In Syria

We Arm The Saudis So They Can Arm Islamists In Syria


The official word is that the Saudis are buying weapons from the Pentagon. But they couldnt get these weapons if our government did not approve of the transaction. These weapons dont seem to have much use except to arm Islamists in Syria.

No one is expecting a tank invasion of Saudi Arabia anytime soon, but the kingdom just put in a huge order for U.S.-made anti-tank missiles that has Saudi-watchers scratching their heads and wondering whether the deal is related to Riyadhs support for the Syrian rebels.

Its a very large number of missiles, including the most advanced version of the TOWs [tube-launched, optically tracked, wire-guided missiles], said Jeffrey White, a fellow at the Washington Institute for Near East Policy and a former intelligence analyst at the Defense Intelligence Agency. The problem is: Whats the threat? 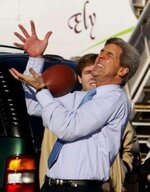 So how does the party that claims to hate war get away with starting or ramping one up. I guess its ok if its not done directly but through allies

And most of the twin towers terrorists were of Saudi birth!!!
These are our allies????
It is an end around run for O's agenda to arm our enemies! !!!
U


NEW YORK  A threat to Hillary Clintons much anticipated 2016 presidential campaign appears to be developing in Egypt where that nations government is taking steps to criminalize the Muslim Brotherhood.

Specifically, a new criminal complaint has been filed with Egypts attorney general, Hisham Barakat, alleging then-U.S. Secretary of State Hillary Clinton collaborated with Naglaa Mahmoud, the wife of ousted Egyptian President Mohamed Morsi, in seeking to incite domestic insurrections to topple Abdel Fattah el-Sisi, the Egyptian general who has been commander in chief of the Egyptian armed forces, as well as minister of defense, since Aug. 12, 2012.

Researcher Walid Shoebat, a native Arabic-speaker and a former Palestinian Liberation Organization operative, has reported on his blog that credible news sources in Egypt have reported in Arabic that criminal charges have been brought against Hillary Clinton and Morsis wife.
S

None of these guys can be trusted.....from the terrorists in Syria, to the Saudis and especially the Democraps in Washington.
U

simon99 said:
None of these guys can be trusted.....from the terrorists in Syria, to the Saudis and especially the Democraps in Washington.
Click to expand...


The total disregard they have for life warrants ruthless opposition.
I see Hillary in the same light as with anyone in her circle.

Many have tried to debunk this including snopes, but they can't effectively do so.
The debunkers stutter ans stammer all over the pages.
The numbers are too great and far too much coincidence for the truth to be hidden and
even they cannot do so with any credence.

To even consider her for that position will tell you what is behind her.

They are both as anti gun as it gets.
This from a quote by Bill C

FOODS DOGS CAN & CAN'T HAVE DURING THE HOLIDAYS

For Pete's Sake Can't We Muster Up A Police Detail To Protect This Poor Paranoid Family From The 3 Letter Agencies.

This is one of the reasons why we must get out there and vote! The purposeful destruction of America..