Just wanted to say hello to everyone.
First post here.
I'm out in Poulsbo.
Been in the state since 1966.
Used to do a lot of hunting with my Dad when I was a kid, but that's been a while ago now.
Grew up with guns. Used to read my dad's reloading manuals when I was younger.
Went skeet shooting a couple of weeks ago. First time in probably 15 years.
"Rusty", doesn't even begin to describe it (

). Had a great time, though.
Would like to go hunting again.
Pretty much only interested in upland birds, though.
Do they still do the Community Hunt out in the George/Quincy area?
I've still got my button's from the late 70's.
Anyone know if there's still a bird release in Tahuya?

Sorry for the repeat post.
Just checking out the picture posting capability. 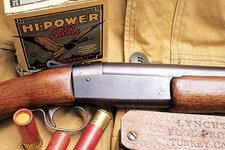