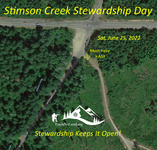 We have Les Schwab tires on board with supporting this event! They will accept any discarded tires we find in the Tahuya on the 25th! Nice!

Some gun shops are supporting it too! Donations for the free prizes coming in! Will post about them soon.

This is turning out to be a good time!

I've had great luck with asking Les Schwab Tire Centers to do that. All over WA & OR, not one has turned me down! We don't always find tires, but when we do, it's nice to know we can drop them off.

DNR has reported some break-ins at their dumpster locations where people have started the tire stack on fire! Then they've ransacked the dumpsters and stolen anything of value (mostly metal stuff and wire cables). By getting the tires out of the forest completely, we eliminate the fire problem. Same with the metal... We're having someone load the metal separately and take to a recycle place. They can keep the cash, but it gets it out of the forest.

We usually don't have to worry about the brass. Tweekers already picked it up at night!

Thanks for your tireless efforts Bill (pun not totally intentional).

Although I live in Portland.

I own vacation property just a few miles from this sight.

I never knew I could shoot there!

After DNR closed the suicide pit years ago, there official position was that I had to travel about 75 miles to the next nearest designated shooting area.

Anyone up for camping in the Tahuya Friday night?

I got a spot at the horse camp, about 5 minutes from the meeting site.

I need to let the camp host know if anyone else is camping.

Hi Bill,
Not going to make this one. Busy with another volunteer work party. Really do want to see that part of Washington though.
Craig

Rem700..300 said:
Hi Bill,
Not going to make this one. Busy with another volunteer work party. Really do want to see that part of Washington though.
Craig
Click to expand...

Trust me, We would much rather do the clean up. Installing water meters for our neighborhood water system and doing yard work isnt real high on my fun meter.!!

Sorry Bill, I’m less than an hour away so I’m driving.

So we've arranged for some free prizes when you volunteer for the Stimson Creek Stewardship Day cleanup event in the Tahuya State Forest! (Lots more than shown here!)

Everyone who signs in at 9 AM gets a free raffle ticket. Drawings at lunch time!

Full details in the link below! 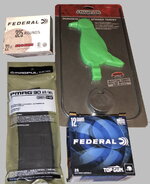 I've got 30 burgers & 30 dogs ready for this event. Complete with lettuce, cheese, tomatoes and condiments. Two different salads, watermelon and chips. For the morning meeting, there's coffee, bagels and muffins (someone bring donuts!).

Is anyone going to come help me eat this?

Oh, I have water, but no soft drinks yet. Might pick some up in Belfair on the way through Friday.

I take it no one is up for camping Friday night? I have a spot at the horse camp. It's no charge camping and first come, first serve, however, the camp host is holding a spot for me. If anyone else wants to camp, I need to let her know ASAP!

Awesome looking weather in the Tahuya!!!

I will be there, for the cleanup.
Last Edited: Thursday at 3:20 PM

I’ll be there to help out and donate 5) NEW Pmags for the cause.

What a day!!! 80* and sunny. Not enough to put Caveman down, close but no cigar. Bill, what was that what was the number? 625 yes!!! I've been to five of these cleanups first time I ever won anything (that I remember) that's all right I don't come for door prizes, the grub, you bett!!!
Thanks to everyone that came out and lended a hand to clean this place up.

The count was 29 volunteers! 4 trailer loads of trash that DNR took to the dumpster, and 1 pickup bed full. It filled that dumpster up real good! And all that was from the one main Stimson pit area and that other no shooting place down the old road.

Yep, the food was real good, the prizes were fun, the people were a lot of fun and awesome to see so may families with kids! Then, when we're all done and I'm loading the truck, several other families came out to shoot with their kids!

While camping Friday night, at the Horse Camp, I crawled into my cot at 8. At 8:05, angelic voices began to fill the air with beautiful singing! I laid there listening and then heard a guitar, then a banjo and finally an awesome harmonica. These ladies had such great harmonies it was totally cool!

It was the Camp Host and her two friends who came to camp with her. I found out the next day, she has a band and plays gigs all over that area.

I couldn't help but smile myself to sleep.

My NOT so favorite part...

While camping Friday night, about 12:30 AM, KABOOM!!! An explosion. 5 mins later, KABOOM!!! another one. 5 later, SAME FREGGIN THING!!! It went on until 3:30 AM! Then followed by pistol and rifle shots! It was going on just to the North of our camp.

Someone dumped a lot of cash on explosives! I listened intently and tried to listen for the thunk of a firework, followed by the explosion, but no, no pre-noise at all. As each one went off, they all sounded the same in tone, with some smaller and some larger. I was real sure it was explosives.

NOT NICE! I had to get up at 5 and this BS was pissing me off!

Bill, you are the man with the drive, determination and planing expertise. Thank you for all that you do.

Awww shucks Bill, you shouldn't have. Always willing to help if health permits. Caveman Jim said:
Bill, you are the man with the drive, determination and planing expertise. Thank you for all that you do. View attachment 1229195

Awww shucks Bill, you shouldn't have. Always willing to help if health permits.

Thanks, @Caveman Jim , but this award was about you and all you've done for public land shooting. (Yes, folks, it does have his name engraved in it).