It's not a site issue, it's because all my .22 handguns were taken off me by a 'grateful government' intent on keeping children safe.

Joe Link said:
Please send me a convo if you're having issues
Click to expand...

You can fix the broken UK gun laws

Dammit @tac , that just ain't right.
My condolences. Knowing a bit of your taste in fireams, I'm sure there were some gems.
Bastiges!

There were some beauties, including the Jurek Free Pistol Serial #2 and a 1936 Olympic Games Walther Olympia with all its weights and two mags....sigh.

tac said:
There were some beauties, including the Jurek Free Pistol Serial #2 and a 1936 Olympic Games Walther Olympia with all its weights and two mags....sigh.
Click to expand...

Man, that flat out sucks. What did they do to them just melt them down or something? A damn shame!

Continuing to play around with the finish on my heritage 22. Previously created a shiny “jeweled” look on the aluminum frame. This time I was thinking go opposite route and make it look like an old SAA. So I put two coats of bleach on the aluminum to give it an old antiquated look.

But now I would have to remove the bluing on cylinder and barrel if I keep going with that look and antique the stainless hammer somehow. Fun to experiment with appearance of a $125 (new price) gun.

I might try to jewel the cylinder just for fun. It’s really easy to do with valve lapping compound and any kind of rubber tip on a dremel. I hear a pencil eraser in a drill press also works well. 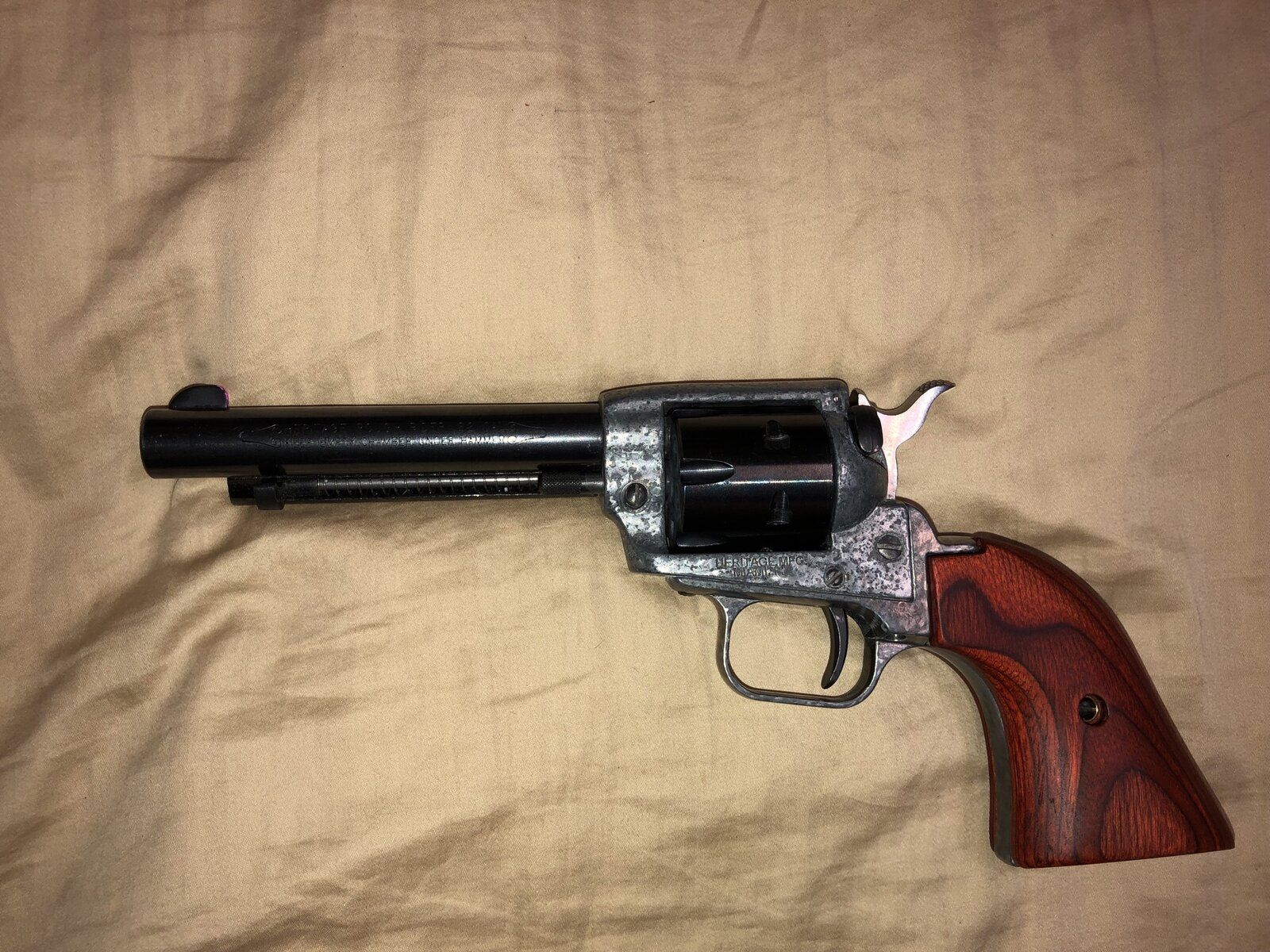 Took off all the bells and whistles and returned hk 416 .22 (made by Walther) to a more or less stock configuration today. The build quality of these makes u smile every time u pick it up. Light years different than my SW 15-22. I like the 15-22 just because it will accept a binary trigger though. These are all metal not polymer. ilikegunspdx said:
Man, that flat out sucks. What did they do to them just melt them down or something? A damn shame!
Click to expand...

No, the Jurek and the Walther went into the Pattern Room Collection, now located at the Royal Armouries in Leeds, but the couple of dozen others all went somewhere else, we know not where, but have our suspicions.

All of my centre fire handguns bar seven went to the same place...
H

WA - The dry side
Diamond Supporter

A couple of mine.

Just built this last night from a Brownells Receiver and spare parts I picked up from gun shows and forum members.
Lots of plans to pimp it out. Definitely needs a brace.

ilikegunspdx said:
Man, that flat out sucks. What did they do to them just melt them down or something? A damn shame!
Click to expand...

Apologies for not reploning before. Not, they were not melted down - NONE of the handguns handed in were melted down, in fact. Anything deemed to have been of interest, and that would have been more than obvious from the amount that had to be paid in compensation, was sent to the National collection, co-located with the Royal Armouries in Leeds [look it up, it is the treasure trove of historical guns and shooting] for inclusion in what used to be called the MoD Pattern Room. As I know some of the staff there from earlier I was able to find out that they are both 'alive and well'.

All of the guns that were of no use to the police - I had four Glocks, similar to the police service firearm - went into store at one of the military ordnance depots where I guess they are still.

Needless to say, we are not supposed to know about this, but remember that there were, in the whole of the mainland yUK, only about 103,000 legally-held handguns. Less, I was reminded by a friend who lives there, than there were in Nacogdoches County, DET.

Back in the early 90's I modified a MK10 to be my .22 rimfire bowling pin pistol. The compensator is actually screwed onto the muzzle end. Can you find the seam between the comp and barrel end? :

A "not-so-common" Ruger Mark II MK514. This pistol has the 5¼ Heavy Taper barrel. My walk-about pistol when venturing to the back of our "empire". :

Not one of these pistols are "safe queens". All have seen live ammunition and spent some time in this contraption, just to find accuracy potential: