Not really an optic, but it is (has magnification of the sight itself - so it has optics).

Most (if not all) of the reviews I have read are good to raving about how good it is.

They now make one that is smaller and has tritium. 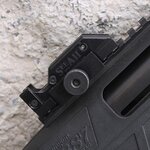 Since they have a sale on them, I am thinking of getting one and trying it out on various guns.

Then if it works well, I may get some more as I have a number of guns that need sight upgrades.

Anybody have actual experience with these?

I have a family member that would probably really benefit from this as they have a dominant eye issue that I can't quite figure out using the usual process to determine which eye is dominant/etc., plus they have little shooting experience and poor technique. I am going to experiment with this with them and see how it works for them.

Been looking at them for almost 4 years now. Really like the idea, but haven't been willing to fork over $100 on it. Reviews seem either pro or con, and middle ground reviews are just shrugs. Really would like to give it a try though.

Its a neat idea, kind of a better option then a holo sight or dot sight. A tiny bit slower to "Get a bead" but more accurate.
I got one a few weeks ago and have been using it on the carry handle on my C.A.R. and it seems to work very well, amd also run some CQB drills on my FAL with it, works quite well, may add one as a back up whem running as a DMR!
So far, im impressed! Just wish there were more options, especially a very compact low pro option for shot gun and pistol!
That said, i do like how its more low pro then holo or dot sights and dosnt snag on stuff or is as fragle as one of those!
Well worth it in my opinion.

Guy I used to work with brought one in years ago. Never have been able to try one but it did look interesting. Just now when I checked Amazon the basic Delta or Cross hair version in down to $65. Still seems a bit much for what it is but it is tempting to try. Especially since if I do buy one from Amazon and don't like it, can just send it back.

I see it best used on bull pups like the Tavor, PS-90 HK MP-5 types and other very compact carbines as it replaces bad sight radius irons from the M-16/M-4 with something far better!
As to cost, look at what a set of good quality Irons cost and then complain about this being expensive! I got mine for $129.00 on sale and in my opinion that was well worth the price!

Anyone tried it as a pistol optic?

bivy53 said:
Anyone tried it as a pistol optic?
Click to expand...


I am thinking of trying the new version of the sight on a number of pistols - I have several SIGs that have just plain sights that would probably benefit from these sights. Thinking about it for my Five Seven and PS90 too. They have dovetail inserts for the FNX and FNS handguns, not sure if the Five Seven has the same dovetail?

Well, I finally got one today. Saw it in a pawn/gun shop while doing a transfer - they had a new one with tritium for $100 so I shelled out that cash after looking at it. I got it home and put it on the scout scope mount on my .30-30 and I like it so far. I went outside after dark and it works pretty well IMO - at least for now until I get a chance to shoot with it. The size of the sight is small, but much larger visually than 3 dot tritium night sights, so much easier and quicker to pick up, at least at night - IMO.

It doesn't seem to suffer from the backlight issues like the Meprolight M21 or PS90 ring sights do (I have both on various guns). Seems to have plenty of light - but I haven't tried it in a really sunny environ from a dark into light area - haven't had the chance with the crappy/rainy weather we have been having.

I do not like that you can't see thru it, so I am not sure what or how to use the gradations in the reticle are to be used.
P

Reviews say much slower than a red dot. Half the view is obstructed with no fixed alignment reference. I don’t see what it does better than other sighting systems.

Watching.
Forgot all about these sights, but remember being interested when I first heard about them.

Pepe-lepew said:
Reviews say much slower than a red dot. Half the view is obstructed with no fixed alignment reference. I don’t see what it does better than other sighting systems.
Click to expand...

everybody has their own preferences and impressions.

i have read some reviews where some people said it was faster, and some said it was slower. I think maybe some people were not as good at breaking old habits/training as others. Or maybe it is their eyesight? I have eyes that are increasingly divergent in their focus - i.e., one eye focuses at a higher elevation than the other, so I sometimes get double vision (especially at night and/or when I am tired) - normally our brain adjusts for such divergence, but as we get older the divergence gets worse and/or we have more trouble adjusting to it. Just 15 minutes ago I was trying the SeeAll again (it is still raining outside so I have not shot anything with it mounted yet) and my eyes were really acting up with the sight?

With eyesight there are all kinds of issues.

So I won't know for sure if it works for me until I have used it for a while. Some people can't use most red dots because of astigmatism - I personally prefer reticles instead of dots, especially on rifles.

Some people say lasers slow them down - I find that I am more accurate with them, and I haven't timed myself, but I think I might not be much slower if not just as fast, but more accurate.

In short, YMMV. You won't know until you try it. I do know the stock peep sights on PS90s suck and therefore I need something better. Also, the Five Seven adjustable sights have a reputation for not being very durable, so I am thinking I may want to replace those (not a big fan of adjustable sights on combat handguns anyway).
Log in or sign up to reply here
Share:
Link Email Facebook Twitter Reddit Pinterest Share