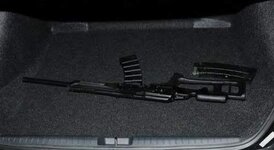 lucifermonkey said:
Who in real life has a trunk this clean? And he killed his mom with .22lr? Why not .223 or the 10mm? 
Someone with ADD or ADHD which I believe Lanza had. Its not the norm as you say.

Just another in a long list of staged events using patsies. Every single attempt to neutralize the 2A will fail horribly except one: Deception.

"By way of deception shall we make war"

I don't think there's any "might have" about it.
If there had been an armed defender on the premises, and Lanza knew about it, the cowardly little **** never would have started his spree.
Much less carried it out.

With each, it was after the stopping of taking prozac type drugs.
They need to outlaw that crap.
People are too easily manipulated with it.

Oregon, in the boondocks

Taku said:
With each, it was after the stopping of taking prozac type drugs.
They need to outlaw that crap.
People are too easily manipulated with it.
Click to expand...

It is not quite as easy, as blaming psychotropic medicine.


What is Always the unknown, is this: "was the individual
1. ~correctly medicated~
2. Correctly Using the medication.


I recall a VietNam Veterans "group therapy" that I once was a part of ( I left, in part, Due to the following...) Where one Vet was complaining his Psych Meds were not working ~Correctly~ .... Only Fifteen Minutes later, he is asking his Buddy, if he wanted to hit the Tavern, "for a few..." After the Group was done.


My question, Straight to Him, was "How do you expect your meds to work, Correctly, when you Drink & smoke Dope, all the time?


Also, it is Not ~Just Psych Meds~ that can add up to a Sandy Hook shooter, other meds, when InCorrectly taken, or even Stopped, can cause a person to ~wig out~ That there is a Six-Bit technical term, for losing it.


Many of the shooters have also had major ~Game Playing~ addictions.... I forget most of the titles, but HALO, and the other Gory blood & guts roll game playing By Themselves, can produce abnormal reactions... So should we take away the games????


The can of worms is endless.... We do not blame cars, for drunk drivers, We Know, that Guns are just the tools, it is the End User, who is guilty, and I humbly suggest, that we should not place a BLAME, upon Psych Meds, without full knowledge.


Todays Video Games, shown at speeds upwards to 300 FPS, can & DO ~Add~ suggestions... On the verge, the cutting edge of awareness.


What could be inserted, into the minds of those using those games?


Could they Be Linked, in anyway possible, to a potential Brain Disorder(s) ????


If they were, what KIND(S) of disorders would a perpetrator be looking for, and link to????


Yes, I do understand, what I have just written, sounds Outlandish.


And so did "buy popcorn" in the 50's.... Subliminal Intervention is a science.


It ~is~ a science that can be used, to alter states of mind.


HOW, it Alters, for What Reasons are the Alterations being done, is the question.


One last FWIW, Zero won the first election, Partially via the use of Neuro-Linguistic Processes. It is why most of us "Got Sick" of hearing his voice... Really. And that goes back to scientific programming of our thinking.

Jamie6.5 said:
I don't think there's any "might have" about it.
If there had been an armed defender on the premises, and Lanza knew about it, the cowardly little **** never would have started his spree.
Much less carried it out.
Click to expand...

ummmmm. Adam lanza had NOTHING to do with sandy hook other than they said his name on the news.. This was a compartmentalized and staged drill made to look real.. One of the kids from the school even slipped up and said "bad guyS" as in more than one AND he said "we were having a drill".Not to mention the video on youtube of the supposed father of one of the kids laughing and smiling like nothing happened and then right when he's about to give his public statement he whipped up some tears and funny breathing to make it look like he was upset. AND same of the actors in this event were also acting at the boston bombing AND the LAX shooting. ALL of these are drills staged to look real so they can set policy against the 2nd amendment, They are trying to take our guns brother. False flags have been happening since WW2. When hitler blew up the Riechstad' and blamed it on the opposition to start a war. Gulf of tonkin ON RECORD was a false flag. it actually never happened. but they used that as an excuse to start vietnam war. 911 was not "staged" obviously but WAS carried out by the govt to go to war, make the patriot act and to start the NSA, DHS and TSA. slowly taking ALL our rights away. Sandy hook was carried out by the CIA. So was the boston bombing. you can see special ops walking around aLL OVER that scene with black back packs just like the one used in the bombing. notice u NEVER heard anything about the second bombing. That was used as a distraction to set the stage quickly with the "crisis actors. do not believe ANYTHING the govt tells u

SRI's are bad for you. period. They are used to zombify the public so they are more easily controlled. SRI's stop your brain from producing the chemicals it needs to achieve critical thinking. the govt doesnt want critical thinkers. only "obedient workers". just like how they put rat poison (fluoride) in the water. 5 mgs will KILL you in 20 min. and dannon puts fluoride in baby water.. fluoride ON RECORD causes autism and lowers IQ by 30%. hitler used to give it to the jews.
Log in or sign up to reply here
Share This Discussion
Link Email Facebook Twitter Reddit Pinterest Share This Discussion

National U.S. Commission on Civil Rights has finally released its report on “Stand Your Ground” laws.