The lower revolver is a Smith & Wesson N-frame 2nd Model Hand Ejector made in 1937 for the Brazilian Navy. Caliber is .45 acp or as I shoot it with handloaded .45 AutoRim using 200, 230 and 250 grain cast bullets. Its a very accurate revolver. The upper thing is the clunky Colt New Service .45 Colt. It couldn't compete against the Smith if it's life depended on it.

The Brazilian m/1937 is similar to the U.S. Model of 1917 but these later mfg revolvers have 3rd Model Hand Ejector patent dates and were off-the-shelf commercial models with a high polish blue. 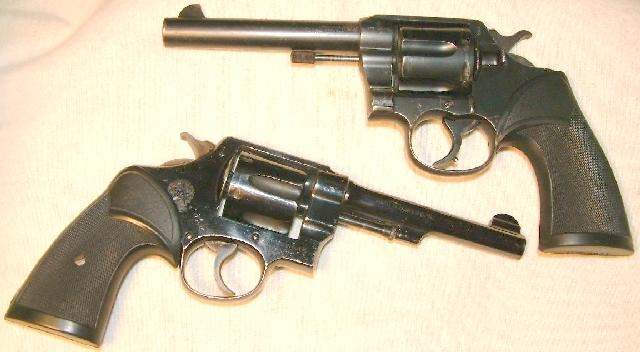 Radical cross-draw that I made myself. This has been an excellent trail gun.