Last Saturday, November 6, 2010, on a local gun range, a Springfield 1903 exploded peppering owner's face and right eye. All shooting immediately stopped after an uncharacteristically loud detonation occurred and a "brother in arms" laid on one knee covering his face sprinkled with dozens of blood oozing pin pricks. Owner of the vintage rifle chambered in 30-06, who was not wearing any eye protection at the time, admitted he thinks he double charged one of his cast bullet hand loads.

Within minutes, what appeared to be three generation of concerned family members surrounded the shook up shooter. His children, who were at the range with his father, showed great courage. The young father received first aid, did not immediately pursue professional medical care, but instead stayed around until the shooters meet finished.

Later on, as the shooter's and everyone's initial shock wore off, onlookers appeared to lament the destruction of the old beautiful rifle more than the shooter's injuries. 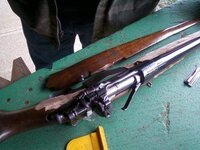 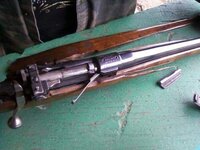 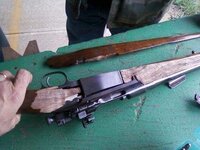 I can't see the serial number or arsenal on the rifle, but I'm guessing that if it was an early number, combined with a doublecharged cartridge, then failure was assured. I'm glad the shooter was only superficially injured. Let this be a lesson regarding shooting safety.

It is a Mark 1, a high number Springfield. I see no receiver damage, just typical damage from high pressure gases released in an action.

I sure hope the shooter is ok, for those of us that reload learn from this. Always be sure of your loads, double check, tripple check......

Brandon44647 said:
I sure hope the shooter is ok, for those of us that reload learn from this. Always be sure of your loads, double check, tripple check......
Click to expand...


was thinking the same thing. I always do visual of my loads to ensure that i have not double charged them.

i wish guns and ammo would do an extreme torture test in this area. I would like to see different cartridges overcahrged to see what the effect would be.

some would blow the gun up, but perhaps others would not.

thats bad news for sure, have to damn careful.
K

just another reminder to always be extra careful around firearms. And for goodness sakes, wear eye protection!!!

Last Saturday, November 6, 2010, on a local gun range, a Springfield 1903 exploded peppering owner's face and right eye. All shooting immediately stopped after an uncharacteristically loud detonation occurred and a brother in arms laid on one knee covering his face sprinkled with dozens of blood oozing pin pricks. Owner of the vintage rifle chambered in 30-06, who was not wearing any eye protection at the time, admitted he thinks he double charged one of his cast bullet hand loads.
Click to expand...

I can think of a number of times that I might fire a weapon without eye pro.

On a static one way range shooting reloaded ammunition isn't one of them.

bcp gets the "trained observer" award.

General Hatcher set about trying to blow them up (tlfreek, here ya go):

He was successful blowing up the early, untreated ones, and the later different steel alloy ones. (this means actually blowing up the action, as bcp correctly observes did NOT occur here).

General Hatcher could not blow up the double heat treated action, despite "blue pills" that were completely off the chart:

"This rifle, selected at random from production on May 3, 1918, was first tested with ten 70,000 pund test shots, then was fired with a 125,000 pound test cartridge. The receiver and bolt held, as they invariably did with this double heat treatment..."

Page 200: Hatcher's Notebook: An indispensible reference work to anyone interested in firearms, especially of the military type.

I batch load all the time EXCEPT the powder. I will mass prime,size,case prep, but when loading time comes it is individual one case start to finish. This with single stage press of course and everyone has their preferences. For me, I feel it is safer to do one at a time and when you are ready with bottleneck cases it is just add powder, add bullet, seat....your done. If you weigh each powder charge and put it in the case and immediately seat bullet, you cannot put more powder in. No loading blocks for me....gets too confusing if you are interrupted etc....you can double charge using the blocks, or knock the whole lot over. It does not save me any time. Once you have cases prepped you can go faster than you think with this system.....but not TOO fast ....thats when boo boos happen.......
Log in or sign up to reply here
Share:
Link Email Facebook Twitter Reddit Pinterest Share

Hunters Gun Blows Up In His Face

I hate Halloween but I love blowing up pumpkins with tannerite!

Oct 16, 2013
U201491
U
National team markswoman beats up past Olympian Shooter after he allegedly rapes her

Rimfire Challenge
Later today at 8:00 AM
Canby, OR