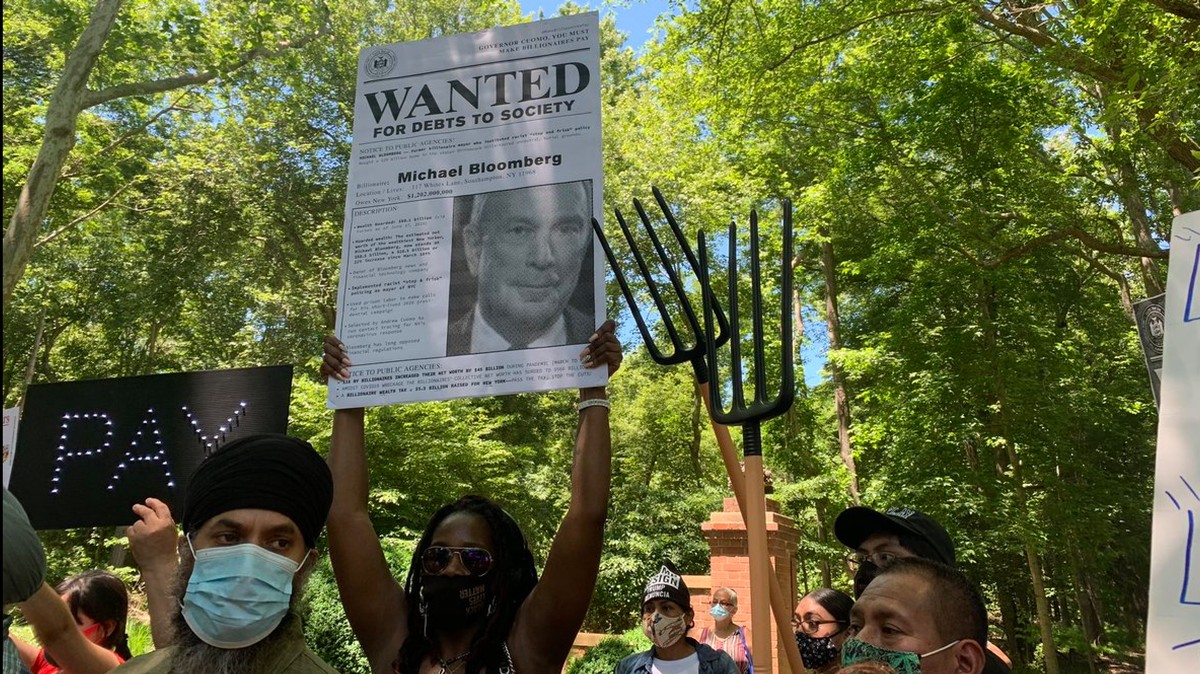 If some of the nation’s wealthiest were planning on a quiet, leisurely retreat to their Hamptons estates ahead of the July Fourth weekend, they’re off to a bad start.

“Tax the rich, not the poor!” protesters chanted outside the 22,000-square-foot, $20 million mansion of former NYC mayor and presidential candidate Bloomberg.
Click to expand...

If some of the nation’s wealthiest were planning on a quiet, leisurely retreat to their Hamptons estates ahead of the July Fourth weekend, they’re off to a bad start.

Let’s see how long this is permitted to last...

Some folks, evidently, have way too much time on their hands. (Though I am not going to deny I cracked a smile at the idea of one Michael Bloomberg being annoyed.)

CountryGent said:
Some folks, evidently, have way too much time on their hands. (Though I am not going to deny I cracked a smile at the idea of one Michael Bloomberg being annoyed.)
Click to expand...

I think the plastic pitchforks are a nice touch.

Lit tallow torches would have completed the ensemble.....

Doesn't ex-president Obama have a shack (+/- $11M) out there in the Hamptons? Why'd they leave him alone and go after dopey, ineffectual Mike Mike Bloomberg? I guess Barry's old S Chicago community is as organized as it's gonna get. Nice job, Barry.

Remember when it used to be embarrassing to ask for a handout?

Does VICE lack an editing staff? How do you let this kind of statement go through to print without calling the writer out for stupidity?
"... millions of low-income Americans are either out of a job — with Black and Latinx Americans being particularly hard-hit— or deemed “essential” enough to risk catching the virus while earning low wages."

Uuuuhhhh.... okay, yeah.
In another blockbuster headline, VICE will declare that Water is Racist... but ya gotta drink some or you'll get dehydrated. Fight The Man!

They forgot to mention that it's Trumps fault.
Yer slipping, VICE.

1) Great idea!! When can we expect them to show up in Medina? Bill Gates has a big enough yard to support an Independent Tantrum Zone.
2) Actually those are plastic spade forks.
Pitchforks are for pitching plant material. (hence "Pitch"fork)
Spade forks are made for digging. (Not far fetched see this as a call for burying the people they plan to visit, especially with rallying cries like "Eat the Rich!")
3) I totally love the idea of protesters discomfiting the people who support them.
4) Anything and everything are racist.
5) A visit to Urkel the Terrible's crib would undoubtedly be taken as a threat by the Leibstandarte SS, and you can bet they would not be welcoming the mob.

They forgot the tar and feathers.

When I was a kid they were called manure forks, at least the ones with wood handles and steel tines were. Used to muck out stalls and the paddock. In any event, those soy-fueled protesters probably bought them at a costume shop. Environmental deductions for using a plastic, made in China, protest accessory.

Believe I’ll start using such in any conversations regarding “protests”.

Camelfilter said:
I like it! I’ll ad in “Totally”, as in:

You might want to find out if @titsonritz has a copyright on that already...