Anyone hear of riots in Montana or Wyoming? Idaho? Alaska? Maine?

(redheaded wife looks over my shoulder...)

The lad has not yet learned that redheads do not come with instruction manuals...

SifuGreg said:
I just want to put a reminder out there.... the best way to avoid a violent encounter is to not be there in the first place. Don't go looking for a fight and please don't put yourself in a situation where you are protecting property with a lethal weapon. Should "simple violence (not aggregated assault) escalate, just entering a weapon into the mix will escalate it to aggravated assault with you being the guilty one. This is not intended to be a debate about what should and shouldn't be legal or right but it is what it is. Not to mention that any non-discriminate use of firearms in these times will do irreparable damage to what we're are trying to do to change the perception of the anti-gunners. Avoid any scenarios where there is violence if you are a firearm carrier (or not for that matter). I also recommend the right kind of training (or course I do, right?) but seriously, building the skill level and having the confidence of knowing exactly what you are capable of during an ambush attack goes a very long ways to keeping your gun in it's holster. Not to mention gun retention training. This is why we train with inert firearms. At the DAC we go hands-on in our training to learn at this level. I really don't want to make this a commercial so I'll stop there.
Click to expand...

Recommending one’s products or services within a post without clearly spelling out your affiliation IS a commercial.

Hueco said:
COINTELPRO & nothing ever changes.
Click to expand...

Oh... Things have changed.
Be sure.

WillametteWill said:
The lad has not yet learned that redheads do not come with instruction manuals...

26 years now...
Nobody has any idea.
I must have been a real bastard in a previous life.
Happily admonished by God I guess.

The Heretic said:
they do not need to be downtown, they could be anywhere in the greater Portland area...
Click to expand...

In a perfect world, that is such a good statement. Unfortunately, in areas of higher risk & crime, property rent goes down (as does many things). There is a lot of emotion that goes into opening a business you are passionate about. I certainly didn't get the facility in the location that was perfect for me. I had to make sacrifices and take some percentage of risk based on budgetary constraints. As humans we suffer from a "normalcy bias" which I translate into a "safety bias" where we are fairly certain nothing bad will happen to me if i can just get to .... (insert goal here). There is a TON of psychology that could go into this conversation but I don't want to be "that guy" so I'll stop there.

This kills me... on top of the apparently low education resulting in "LOTTERS will be SHOOT"there is a whole lot of flaggin' going on there. This does nothing to promote intelligent gun safety... sigh.... can we please STOP giving ammunition to the people who see us in this stereotype?

"can we please STOP giving ammunition to the people who see us in this stereotype?"

It looked like a false flag to me. Don't get too worked up over it.

Stomper said:
My wife is an auburn haired 2nd gen. Australian woman of Scottish decent..... she cooks with a claymore!

I hope the front of that thing is always pointed towards the enemy!
A

One thing that would be really funny to watch. If in cities hit hard by the looting scum there was a lot of people showing up to protect places? The media would be demanding police arrest the people stopping the scum. It would be racists that not all places got protected to the solution would be to of course force the protectors to let the scum run free. After all if the misery is not shared it's got to be racism.

I live on a hilltop in Central Oregon 12 miles from the nearest town. I am sure there are really good people who live in Portland, / Eugene, many on here I know. But at my old age and attitude, I really don't give a f if they burn the whole fing town to the ground. Urban renewal it is called.

When the business leave after being looted or burned out, the fronts are all boarded up and it is all left to the roaming Mad Max hoards scraping up the remnants for themselves. Just search some and you will find the abandoned boarded up buildings and sh*thole streets of Dallas, Memphis, Baltimore, Detroit and a host of other cities. Portland and Seattle in them. The decline in the standards of living, and human decency over the last 20 years especially will not be reversed anytime sooner than the 20 or more years it took to get that way. Nothing will change short of full out civil war or insurrection, and in fact will get worse. We are now seeing just how crazy sh*t is getting with the way the liberals are letting things go. Later on when these rioters have their way, they will turn on their handlers if the handlers attempt to rein them in.

There is nothing to be gained by the roaming maggots to come to a place like Central or Eastern Oregon, everybody carries a gun, and most rigs also have long guns (gophers, sage rats, badgers, rock chucks etc) and open carry is fairly common. LE loves the CCW crowd, they look at them as the needed backup they may need some day. I can guarantee if you decide to damage somebodies property, burn a building or hurt somebody, you just may find yourself tossed into somebodies hog lot way off the road somewhere never to be seen again.

The decline always starts in cities and over time spreads outwards. Inaction and enabling by the leaders of the larger metro cities is going to cause full scale hell soon, because they refuse any assistance from the Guard, per our governor.

Us older guys can't do much to help out, but I can still put 10 rounds inside the 8 ring at 350 yards with a .308 any day of the week for whatever that is worth, elk meat at least.

III%ers were guarding storefronts in salem this weekend. a salem LEO friend of mine who was working, getting objects and ”liquid” thrown at him, said they(III%) were nice, respectful and pleasant to talk with.

The difference between downtown and 5 miles away, urban or suburban, is that most people live outside of downtown. Start tromping thru someone's neighborhood with Molotov cocktails and you will eventually get met by people with shotguns. That would be very stupid of Antifa.

If they went rural, you would probably never hear of them again.

And BTW - one of my Shockwaves is now hidden in my daily driver - with ammo.

WillametteWill said:
The lad has not yet learned that redheads do not come with instruction manuals...

Had one of those in my life in my much younger days. Certainly was not going to be marriage material, but it was one of the more interesting 6 months of my life, and tiring at times. But she did have a 68 Camaro.

EHJ said:
Anyone hear of riots in Montana or Wyoming? Idaho? Alaska? Maine?
Click to expand...

Hard to start a riot in places where tractors outnumber humans.

oneharmonic said:
Hard to start a riot in places where tractors outnumber humans.
Click to expand...

There's more farm tractors in these places than there are humans living there
Edit. In other words... theres not enough humanity to get together to riot.

CamoDeafie said:
There's more farm tractors in these places than there are humans living there
Edit. In other words... theres not enough humanity to get together to riot.
Click to expand...

I know what he meant.
And he knew what I meant. 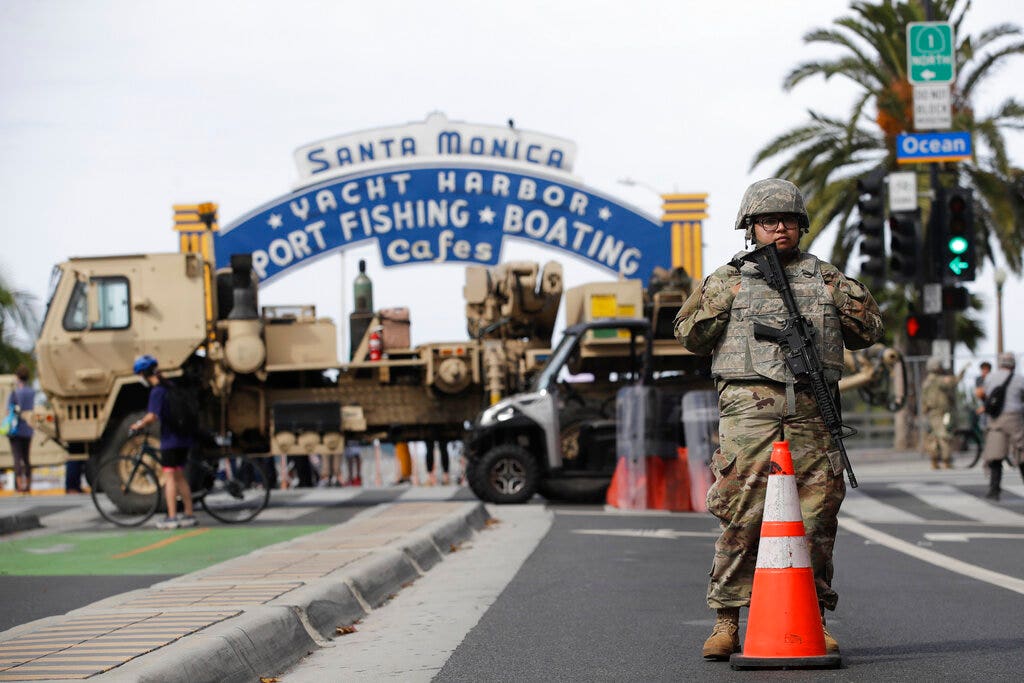 A California liquor store owner kept his business safe from looters in Santa Monica after standing in front of the establishment armed with an AR-15.