So I’ve got this ludicrous thing… 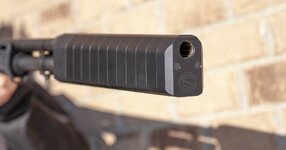 If I’m being honest, I only bought it as I butchered a Saiga Clone shortening the barrel too far and I was unable to open the gas port up enough to get it to reliably cycle low brass. With the can it cycles low brass wonderfully.

Being me, I’m always looking for the next “project”. A recent thread about big bore revolvers had me thinking about big bore rifles. Well, one thing I’ve always been interested in is bolt action 12g shotguns. Especially since savage released the 212. I’m a weirdo, so pumps and semis don’t really scratch the itch the same as something quirky like a bolt action 12 gauge would.

Well my noodle is got me thinking that might be a worthy addition now. A bolty big bore, well quasi big bore.

Im looking at either the Turkey model (smooth bore) or just get the rifled model. Not sure, never owned a rifled shotgun before, could be really fun to reload for.

Whether shooting subsonic Gucci ammo or custom reloads to factory 300 grain sabotted slugs, through the salvo it could be quite interesting.

I have ZERO need for the longer barrel, so I’d likely SBS it and bring the barrel back some or cut it to legal 18”. Likely would kick like a mule, but what’s a big bore without some oomph?

I'm thinking you could have your own division in a 3-gun match with all the quirky.

Hueco said:
I'm thinking you could have your own division in a 3-gun match with all the quirky.

I imagine I’ll need to practice my reloads!

Reno said:
The 2 round mag might make that difficult!

I imagine I’ll need to practice my reloads!
Click to expand...

Pull pirate blaster for final near side target

Pull pirate blaster for final near side target

Still need to get myself a holster for that pirate blaster.

How do you like the salvo? I know that's not the point if this thread but I've been looking for a K model with zero luck for a while. And don't know anyone who owns that can give me much of an opinion
Last Edited: Jul 3, 2022

TTSX said:
How do you like the salvo? I know that's not the point if this thread but I've been looking for a K model with zero kick for a while. And don't know anyone who owns that can give me much of an opinion
Click to expand...

I’m undecided on it this far. I’ve only had it on one gun and it’s not the best example of its use. I’m hoping something like a Savage bolt 12g might be a better use for its capabilities.

Anyone own a slug gun (rifled shotgun)? How often do you use it and for what reasons?

Anyone load brass 12 gauge shells? Can solids be loaded? Be crazy to load up some sort of lead slug that can be shot through the Salvo. 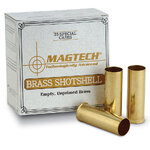 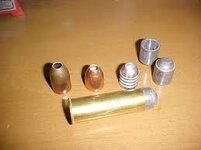