arakboss said:
I had this same view until I started helping out an FFL. There is much more work involved in handling a transfer than I realized. And now Measure 114 is adding extra steps to the process. Tigard Pawn has been one of the least expensive around at $27 but they are going to have to raise their price and other FFLs will have to do the same.
Click to expand...

If its so difficult they could have pushed against implementing the system.

"challenge only Measure 114's restrictions on large-capacity magazines and claim these restrictions violate their rights under the Second and Fourteenth Amendments. Plaintiffs do not challenge Measure 114's permit-to-purchase provision, the implementation of which this Court has stayed for thirty days following a request by Defendants."

EDIT: I think the Judge did more with another order in the OFF lawsuit. Sounds like she rejected consideration of OFF's filings on December 5 as being untimely. She says plaintiffs had notice of the provision for a long time. But left it open to consider that info later.

Not good. Drop the flags to half staff.

Nope. 3 day allowance is gone as of today for anyone that has not started the process. 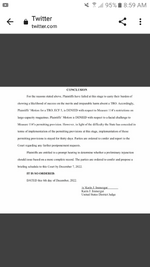 arakboss said:
Does the 30 day delay apply to 3 day rule?
Click to expand...

I believe the only thing is the permit system, everything else is in effect on the 8th. Get strapped in folks this is going to be a long bumpy ride.
T

The judge does have a point that most mass shootings have involved bad people with capacity beyond 10 rounds however, on balance lawful citizens should not be disadvantaged.

Does not seem that new purchases can be cleared within the next 30 days. Lots of ffls will likely go out of business. Awful...

Pepe-lepew said:
Nope. 3 day allowance is gone as of today for anyone that has not started the process.
Click to expand...

Pepe-lepew said:
Nope. 3 day allowance is gone as of today for anyone that has not started the process.
Click to expand...

Umm... how exactly is the 3day law pre-empted by a stay on the purchase permit requirement? The two are not related... AFIK.
P

Because in the DOJ request they specifically mentioned closing the 3-day.
P

Yarome said:
Umm... how exactly is the 3day law pre-empted by a stay on the purchase permit requirement? The two are not related... AFIK.
Click to expand...

The 3-day is closed by the measure. The DOJ specifically wanted the 3-day ban to go into effect but the permit requirement to be delayed.

Yarome said:
Umm... how exactly is the 3day law pre-empted by a stay on the purchase permit requirement? The two are not related... AFIK.
Click to expand...

So, basically, if you don't have a CHL guns are essentially banned as of now for Oregonians.

Because... the measure did not provide a provision to stay the federal law nor instate a waiting period for firearm purchases. The judge also does not have the authority to stay a federal law.

BuckWallace said:
So, basically, if you don't have a CHL guns are essentially banned as of now for Oregonians.
Click to expand...

LEVO knew what they were doing. Devious weasels.
O

To some extent I'm not un-happy that the judge isn't going to stay the magazine-ban portion of BM-114. Not because I agree with it (I most definitely do not... her reasoning is completely specious), but because it just adds more ammunition to the multi-state effort to obtain a favorable federal ruling on the constitutionality (or lack thereof) of restrictions on magazines over whatever-arbitrary-capacity.

So far the judge is behaving exactly like a typical activist liberal, because that's exactly what she is. There's value in people acting so predictably. I think it's activist, liberal judges that the conservatives on the USSC have the biggest beef with right now.
P