One rifle for everything, No so-called "assault rifles" included...

I was thinking the same rifle.


The Tikka T3x those Canadian Rangers carry would be another similar choice.

Just thought of something, I have a Kali-Key for my AR which makes it a bolt action

NeoBlackdog said:
Gotta go with my AR-15. And no, it is not an 'assault rifle'.
Click to expand...

No, It's an Armalite Rifle.

orygun said:
No, It's an Armalite Rifle.

But if you didn't have that one, what would you use??
Click to expand...

NeoBlackdog said:
Gotta go with my AR-15. And no, it is not an 'assault rifle'.
Click to expand...

for the sake of the poll, non-manually-operated firearms of all kinds were excluded. 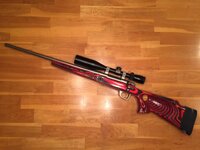 Andy54Hawken said:
My choices that I posted in this thread reflect the question in the OP.
There was no mention of opposing the forces of tyranny in the OP.
Hunting was stated as was self protection in the OP.

Granted what self protection means , will be different depending on the person and situation.

In any event....
If I am armed with either of my two choices that I posted here and need to engage and destroy the enemy as we used to say in the Army...

I ain't just gonna roll over and wait to die...Just 'cause all I have is either my .54 Hawken Rifle or Winchester 62A.
Its more a matter of using what I have....
And adapting myself along with my knowledge and skill to the situation at hand.

And with all that said...
Thank you for your kind words and story in your post....
Andy
Click to expand... 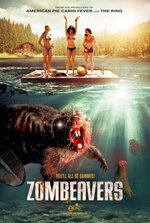 of course if we're talking about radioactive rabid un-dead grizzly bears we are talking a different ballgame.

DunRanull said:
OK here's my variation on the "Only One Gun" theme. Should be pretty simple but may hear some interesting variations...
Now, supposing you could have only ONE high-powered rifle, MANUALLY operated- NO semi-autos- for everything- hunting mainly but also for protection as needed.
WHAT would it be, in ya'lls experience?
I made that choice many years ago which Ive mostly stuck with over the years, an early '70's BLR .308........ I chose that cuz it is quicker than a bolt and in a caliber that is easy to find, even as mil-surp. I have other rifles but aside from a .30-30 Marlin it has been and is my main hunting rifle. I've got a nicely sporterised Steyr-built K98k Mauser but Ive yet to use it as I don't bear or elk hunt. IF I was stuck in a cabin in very rural Canada my choice MIGHT be a .303 Enfield #4...
What say you all?
PS I do reload a variety of .308 for various purposes. FWIW my own OTD rifle of choice is either an AK or AR15, which is beyond the scope of this thread....
Click to expand...

The ONE and ONLY semi automatic rifle that I ever owned or even WANTED to buy was a Made in CT MARLIN PAPOOSE (Take down.) with the blue case, stainless steel and black composite stock. So I bought it and enjoyed it circa the late 90's and on. My late husband shot it more than I did. I sold it out here in Montana. It was a tack driver.

(I did own a few sweet Glock 19s, one Smith and Wesson Model 41 and one S&W Model 22A when it came to Semi Automatic Pistols.)

I actually liked/like to SHOOT and still like the LOOKS much, much MORE in OLD FASHIONED, classic styles, classic brands, wood/steel, LEVER action and bolt action rifles more. I discovered bolt action rifles in a couple of PLAIN and simple styles that actually FIT ME way down the road as in years too.

I no longer own or shoot my former BEAUTIFUL, much heavier walnut/steel lever action (CF and RF) rifles in WALNUT/STEEL and walnut/brass. I owned several SWEET - tack driving brands and 2 were bought back east and they came out west with me too.

I do shoot, on and off, my former last 2 firearms - BOLT ACTION rifles that I gave to my husband in the CZ brand with iron sights.

It used to be 22lr FIRST and so on. It still could be that WAY if need be but there is still something about the 22wmr cartridge that just sits well with ME. I had ONE former sweet lever action rifle in 22wmr too.

If the above were not here for some reason (?) and/or if my husband decided to sell (?) those CZ rifles - I would use HIS CZ Scout or the CZ Training rifle - they are in 22lr. Iron sights just like I LIKE rifles in NOW as in the PAST too.

Disclaimer: I do NOT hunt but I have gone on some hunts with my MT husband. I like to fish but not hunt. I prefer to SWIM more than fish too. I enjoy the scenery (Drive and short 'hunting' trips - HIKE in.) but NOT freezing my @@@ off! Grin. Plus if I take my cane JUST IN CASE I need it - it is a pain on some types of terrain! Previously, I did NOT need or own a cane too so there was NO problem hiking in with him. Been there - done that!

I DO consider the above CZ bolt action rifles for self defense use too.

The 30-30 Win caliber rifle would be for my woods/wilderness protection especially where I lived, hiked and CAMPED alone and, later on, with a couple of friends. BUTT up to wilderness - way UP in the Sapphire Mountains, the Bob Marshall Wilderness, where I traveled to right below British Columbia, Canada, in several other places in MT and a few in the Panhandle of ID. I traveled to WY several times but I did not camp in WY. And I ALWAYS carried a CF handgun on me (ON my body - properly holstered.) too. Always! Plus I traveled with a couple of other guns and knives too. My hands and arthritis were much better too.

I did have other CF lever action rifles in PISTOL CF CALIBERS too. (Plus more in 22lr too.) Same caliber ones that matched my CF and RF handguns. MATCHING CALIBERS! IT was cheaper and EASIER for me when it came to buying factory ammunition in CF calibers. (45Long Colt and 357Magnum/38Special.) I personally NEVER OWNED a 44Magnum rifle but I was gifted those former two S&W Model 29's d/a revolvers that I did not ask for.

But for REAL protection in Grizz country and for camping for half of a year before and after the little log cabin time of mine BUTT up to wilderness on a private ranch AND on public lands... I did get the now former 30-30 Win rifle. NIB - MADE IN CT Marlin 336C - walnut and blue steel. Plus throw in other camping times in 20 years out west. I NEVER OWNED a CF rifle back east.

I used the ADVICE that I got from several people when it came to that 30-30 Win. cartridge. Back east (East Coast and Great Lakes region.) and out here - MT and while visiting/traveling/shooting in CO. All friends, 3 relatives and several hunters gave me advice. Plus what I read and studied back east and out here in books and online.

So again, ONE choice for what is here NOW and my life now @ 72 years old:

But that could change and, if so, it would be a 22lr bolt action rifle.

My husband told me that he had a sweet BLR 308 a long time ago too. I may have mentioned this to you (?) or to someone else in other threads in the past.

I read him your question and he told me that he would choose a 22lr BOLT action rifle and his OLD, classic, beautiful walnut/blue steel 30-06 bolt action rifle.

I think that he would choose one of his several 22lr rifles FIRST (?).

He does NOT own any semi automatic rifle any longer.

He does own and shoot his Glock and Beretta semi automatic pistols and his Ruger single action revolver. ALL of his other rifles, handguns and shotguns went bye bye.

orygun said:
That's purdy, @skywag . Is that a Mauser?
Click to expand...

That is a pre-64 Model 70, as customized by JK Cloward. I am still wondering what happened to Jim. I see no obituary and his phones are all turned off.

This. Might change the optic though. It's what I got to go with and I luckily have a decent stash of 45-70. Works on most things on the continent and according to the documentary known as "Jurassic World", dinosaurs too. I suppose I'd just have to throw sticks at small game though. 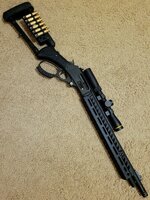 Good choice. Surprisingly low recoil. But you want the suppressor for it as well. I use a Bowers Vers 50. While it is nowhere akin to hearing safe with a can, it is tolerable with earplugs.

The new narrative by the anti-gunners "assault pistol"

Jan 24, 2023
The Heretic
P
Greetings All, I'm curious If anyone out there is familiar with or owns one of the custom rifles crafted by the late gunsmith Howard J Sites?

The Members Of The Traveling Upper: NWFA & Trash No Land Fundraiser.